Those who hate Ted Cruz, and those who love Donald Trump – usually one and the same person – have peddled so many porkies, falsehoods, and just plain moronic nonsense about Cruz that it seems now is the time to deal with some of this foolishness.

It gets utterly infuriating to hear these idiotic attacks and irresponsible charges repeatedly being sprayed around. I know that atheists, homosexuals, and other militant groups delight in spewing reckless lies and bearing false witness, but when people who claim to be conservatives – and worse yet, Christians – do it, it just makes me sick. 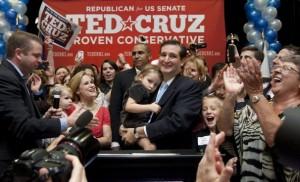 They throw out one idiotic claim after another, without a shred of evidence, yet when you counter their rubbish with loads of documented facts and evidence, they simply call you a “liar” and keep on with what the Trumpbots do best: ad hominem attacks.

Having once been in a cult, I know how they operate, and there is no doubt in my mind that the Trump cult is causing enormous damage. The undiscerning devotees simply throw out their brains and their ability to make moral assessments, and just become zombie-like yes-men for their dear leader. It is idolatry, and it is scary as all get out.

This is one of the more brainless charges being made, that Cruz is somehow ineligible to run for POTUS. Of course he is eligible: he meets the constitutional requirement of natural-born citizenship – he was born to an American mother in Calgary. Court after court are throwing out lawsuits on this foolishness:

Here is part of one piece by law professor Jonathan Adler:

On CNN.com, Yale law professor Akhil Reed Amar, arguably the nation’s most prominent liberal originalist scholar, argues that Cruz is a “natural born citizen,” while also stressing that this is a question for the political process, and not the courts. He writes:
“From the founding to the present, Congress has enacted laws specifying that certain categories of foreign-born persons are citizens at birth. The earliest statute, passed in 1790, explicitly called certain foreign-born children of U.S. citizens ‘natural born citizens.’ It did not say they should be treated ‘as if’ they were ‘natural born citizens.” It said they were in law deemed and declared to be ‘natural born citizens.’ Congressional laws have changed over the years, but this 1790 law makes clear that from the beginning, Congress by law has the power to define the outer boundaries of birth-citizenship by conferring citizenship at birth to various persons born outside the United States. And here is the key point: The statute on the books on the day Cruz was born made him a citizen on that day. . . . Note that the right question to ask is not: What were the natural-born statutory rules in 1788 or 1790? The right question is: What are the natural-born statutory rules on the day a given presidential candidate was born?…”
Harvard law professor Cass Sunstein, not much of an originalist himself, finds it to be a close question, but also reaches the same bottom line.
“Under a narrow interpretation, natural born means that you were born within the territorial boundaries of the United States. Under an alternative and broader interpretation, it means that you were a citizen at birth, and did not have to undergo a naturalization process. The text of the Constitution doesn’t exclude either interpretation. The word ‘natural’ might be taken to require birth in the U.S.; in the 18th century, natural was often opposed to ‘provided by statute’ — suggesting that to serve as president, you must have been born in the country, rather than being recognized as a citizen through an act of Congress. But a natural-born citizen might be someone who just is a citizen at the moment of birth, as Cruz plainly was (through the citizenship of his mother). . . . On the merits, I agree with Cruz: The Naturalization Act of 1790 counts in his favor, and because he was a U.S. citizen at birth under U.S. law, the better view is that he is natural born.”

Then we have one loony conspiracy theorist after another throwing around these ridiculous claims about how Cruz must be the antichrist because he is some globalist, into the New World Order, a stooge of Goldman Sachs, etc, etc, etc. Oh good grief. Here are just some of the many pieces refuting this baloney.

Related to this are all the dumb claims about Goldman Sachs, his wife, and so on. Time for some truth here as well. And bear in mind that not only does Trump have plenty of Goldman Sachs ties, and George Soros ties, but he is basically owned by every bank in Wall Street. And he is going to be our saviour? Puh-leeese!

Another nutter accusation we keep hearing is that Cruz is some evil “Dominionist” – whatever that means. While his dad may have some leanings there, this is all so ridiculous. But because there has been so much hype and foolishness spread about this, a few things must be kept in mind:

1. Ted is running for POTUS, not his father.
2. This label is thrown around far too recklessly. I believe the Lordship of Christ should extend to every area of life. That is just plain biblical, and does not make me a dominionist. Theonomists for example would also speak about the dominion of God on earth, but take a rather different view than some of these folks.
3. Even if Ted was into this hard core – which I doubt – he cannot and will not implement anything like it as POTUS. He can’t, as he is bound to the Constitution, and he is the fiercest constitutionalist running.

Plenty of lefties are trying to smear Cruz with this, including religious lefties. Robert Gagnon does a terrific job of demolishing this idiocy:

Meet the political leftwing version of the Red Scare (except that there really was something to fear during the Stalinist regime). What a shame that a professor of American history at Messiah College, presumably an institution that values the Christian faith, should construct such a badly argued and slanderous piece against Ted Cruz.
I found the most telling comments to be Fea’s charges that Cruz is a dominionist because “Cruz wants to defund Planned Parenthood because it threatens the traditional Christian understanding of the family” and “When Cruz talks about the Free Exercise Clause of the First Amendment, he almost always discusses it in the context of persecution against Christians” (did you catch the “almost always”?) and “Cruz’s constant complaints about the liberal media also reflect this dominionist battle.”
What conservative voter doesn’t want Planned Parenthood defunded, doesn’t believe religious liberty ought to be safeguarded against assaults from the Left (including for socially conservative Christians who are most under assault), and doesn’t think the mainstream left-wing media is incredibly biased in its reporting? Cruz himself has been victimized by the media repeatedly, even at FOX (as has already been acknowledged), to say nothing of PBS (their only “Republican” commentator, David Brooks, despises Cruz), NBC, and ABC.
Cruz was a brilliant student at Princeton University and Harvard Law School who is the most knowledgeable candidate about the Constitution by far. He believes in a democratic/republican government of checks and balances. He strongly rejects treating the Constitution as little more than a cipher into which one can impute personal ideology at will. The claim that he is a dominionist is absurd…
The fact that Cruz wants Christian values to shape this country (historically, it is irrefutable that Christian values did shape this country, and that for the good) does not make him a “dominionist.” It simply makes him a political leader who takes his Christian faith seriously; someone who recognizes that there are Christian values that are beneficial for the whole body politic, not just for Christians, and that snuffing out Christian values will be detrimental to the whole. Being opposed to funding Planned Parenthood, for example, benefits developing humanity regardless of what religious heritage they grow up to embrace. That’s not dominionism. That’s life and well-being for all.

Last but not least, if you have nothing truthful to bring down your opponent with, just throw some mud around. Any old mud will do. Trump and his henchmen have become experts at mudslinging and character assassinations, and if making up lies is the way to do it, then no probs.

Thus the recent disgusting set of accusations about a host of affairs that Cruz is supposed to have engaged in. The really bizarre thing here is the Trumpbots worship a guy with many actual known affairs, yet hate a guy simply accused of them! This is mind-boggling!

To defend Cruz against all these brainless attacks and trumped-up charges (pun sorta intended), is not to claim that Cruz is the Messiah. I know for a fact that Cruz will not save America, make America great again, restore America, or any of the other idiotic claims the Trumpites keep dishing out. So you can’t call me a Cruzbot – because I am not one.

All that any principled and consistent conservative and Christian like Cruz can do is slow down the rot, and maybe give America a few more years, if God’s grace should linger. Cruz knows that, I know that, and all biblical Christians know that.

But the Trumpites really do look upon the Donald as the Messiah. And the Christian ones are so beholden to him that they will throw out everything the Bible has ever said about the need for godly rulers and righteousness exalting a nation, etc., and will totally run with the most pagan, immoral, arrogant, ruthless, petulant, and self-centred candidate going – and a lifelong supporter and financial backer of leftist and Democrat causes – all to somehow redeem America.

As I said, that scares me just as much as the prospect of Hillary or Bernie getting in – and they bother me no end as well. Sorry, but I have dealt with far too many folks claiming to be Christians who have simply thrown away their Christianity and their brains as they attack Cruz and idolise this megalomaniac. It is time for this to stop.

12 Replies to “Dismantling the Cruz Myths”