Part One of this article looked at various issues of concern to conservatives. It should be clear from all that, that Trump is no conservative. But there is so much more foolishness being pushed by the Trumpites about his money, his so-called financial independence, his supposed inability to be bought and the like, that an entire section must be devoted to these dodgy claims. So Part Two of this article will now examine some of those matters in more detail. It will also look at his electoral chances.

Trump and money to Democrats

As I keep saying, Trump has spent the past forty years supporting and financing leftist and Democrat causes. Various Democrats, including the Clintons, have received hefty financial gifts from Trump over the years. How that makes him a conservative and one able to now take on the Democrats is quite beyond me: 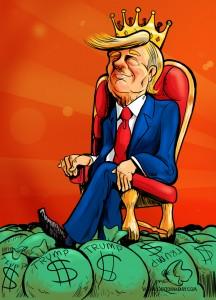 Then we keep hearing that because Trump is so wealthy, he depends on no-one but himself to finance his presidential campaign. Is this the case? Um, no:

As one piece summarises:

Myth: Donald Trump funds his own campaign.
From his FEC filing:
His campaign spent $5.5 million.
Donations by people and corporations: $3.9+ million.
Loan made by Trump to his campaign: $1.8+ million.
Total collections: $5.9 million.
A loan to the campaign is paid back by YOUR donations, AND corporate donations.
Trump has spent only $104K of his own money.

Trump owned by the banks

The Trumpbots go on and on about how Ted Cruz is somehow owned by the banks, and is somehow in bed with Goldman Sachs and the like. This is ludicrous, as I discussed in my recent article on Cruz:

The simple truth is, no one is more in bed with GS, the banks, and even George Soros, than Donald Trump. Indeed Trump is the most bought man running in this election. The idea that he is somehow above the lures of money is laughable. He is a slave to his god money and to the big banks. And as I have pointed out before, almost all the candidates have connections with GS, including Trump:

Trump is no free-marketeer. He is pro-tariffs, pro-high taxes, pro-big government, pro-protectionism, and is simply a crony capitalist. As one commentator put it:

Crony capitalism is the air he breathes, the only sea in which he swims, his second nature. His recipe for “fixing” America, he tells us, is to appoint “the best people” – he names some of his fellow crony capitalists – to exercise even more unaccountable power and to do so with “unbelievable speed.” He assures us that, this time, it will be to “make America great again.” Peanuts’ Lucy might reply: “This time, for sure!”

One could also highlight all of Trump’s failed business ventures. And he is going to save America?

All the Trumpbots going on about Cruz and globalism and the like really need to just shut up here, with their messiah being the biggest globalist, Soros buddy, and Establishment player around. Plenty of important articles have documented all this:

Yeah, we believe you Donald. He has spent his entire adult life hobnobbing with the Establishment players, the ruling elites, the Hollyweirdians, the leftist celebrity set, and so on. And he is now going to save us from the Establishment because he is an outsider? Ha!

No candidate in recent times has been more unpopular with the electorate at large than Donald Trump. Indeed, since polling has started on how unpopular a candidate is, no one has outscored Trump. This alone should worry every true conservative, and make them think twice about supporting such a loser:

More importantly, dozens and dozens of polls on a Trump-Clinton runoff show consistently that he loses to Hillary. That alone should cause any true enemy of Clinton to dump Trump immediately, and run with the consistent conservative who can beat her:

These two final pieces on the polling are very important indeed, listing the specific polls and making it crystal clear that a vote for Trump is a vote for Hillary:

The reason Trump is so unpopular is easy to establish: leftists of course hate him, women of course hate him, but huge percentages of conservatives also hate him, for the simple reason that he is no conservative. Yet the Trumpbots are going to simply allow Hillary to be swept into office by their deluded and zombie-like support of the loser Trump. As one commentator rightly says:

Hillary Clinton is the most beatable likely Democratic nominee since John Kerry, and the GOP is poised to nominate the one man least likely to beat her, and the one man who would be just as bad in the White House. I don’t vote for despicable people. I don’t vote for leftists. And I will never, ever, vote for Donald Trump. He’s no better than she is.

As another writer correctly states:

Trump is not going to walk away with this nomination. He is, in fact, probably not going to reach 1,237 – and that’s because he has insulted and degraded almost everyone who isn’t already voting for him, and continues to weekly (if not daily) show himself unfit for the office even as he racks up a huge delegate lead. This reality is setting in with Trump’s supporters, which is probably responsible for some of their uglier antics over the last week, and for why they are already pre-complaining about “cheating” at the convention.

This is just a small sampling of the evidence. And much more could be said on so many other issues. But the main thing to emphasise here is this fundamental truth: Trump is NOT a conservative. So why in the world would any true conservative support him?

And more shocking still is the fact that he will most likely lose to Hillary in a general election. So why run with such a guy? My mind boggles on all this. So let me sum up my thinking on this with a short bullet-point conclusion:

Seven simple truths you can bank on:
-I detest Obama and Clinton as much as any Trumpite ever will.
-I love America as much as any Trumpite claims to.
-Trump is not a conservative.
-Trump will almost certainly lose to Clinton if he gets the Republican nod.
-If by some strange anomaly he does get in, he will likely harm America just as much as Clinton or Sanders will.
-Thanks a lot Trumpites for helping to hasten the destruction of America.
-None of this is even necessary since we have a genuine constitutional conservative still running.

Part One of this article is here: billmuehlenberg.com/2016/03/31/dismantling-trump-myths-part-one/