I do not have too many Australians in this series – indeed, this will be the first one. But Leon Morris, who was born and bred in Australia and served his Lord in distinguished fashion, is a worthy inclusion in this series. He was one of our great New Testament scholars and conservative theologians, and was a giant among men in so many ways.

Up until recently we had no major work on his life (although Morris did pen a brief autobiographical sketch of his outback ministry in 1985 entitled Bush Parson). This dearth was remedied last year when Paternoster released Neil Bach’s useful biography, Leon Morris: One Man’s Fight for Love and Truth.

It is mainly this work that I draw upon for details about his long life and ministry. I draw upon my own collection of books by Morris for details of his theological achievements and contributions. Indeed, I have 18 volumes by Morris, which includes eight of his commentaries. These volumes have been much used and appreciated over many decades. He is always reliable in his conservative, evangelical scholarship, and his works have stood the test of time. 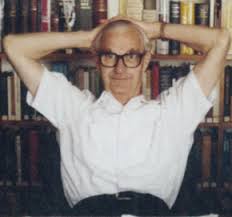 But let me first briefly discuss his life and work. He was born in Lithgow, NSW, in March of 1914. In 1931 he went to the University of Sydney, the first one in his family to attend university. During his first year there he became a Christian. He left with a science degree in 1933, and did another year at a teacher’s college.

He got several teaching jobs, but during this period he taught himself New Testament Greek and enrolled in a theology course which he completed with first-class honours. A life-long Anglican, he became a deacon in 1938 and an ordained priest in 1939. He married Mildred Dann in 1941.

His 800-page thesis was on ‘Expiation and Propitiation: The Doctrine of the Atonement’. It was his work on the atonement and the cross that he is most noted for, with many books and articles following on from his original research. His first book, The Apostolic Preaching of the Cross, published in 1955, was a distillation of his PhD thesis.

Two other major works on this topic are: The Cross in the New Testament (1965) and The Atonement (1983). Together this trilogy of works offers us one of the finest expositions and defences of the New Testament view of the atoning work of Christ.

But back to his life story. In the early 60s he lectured in various evangelical theological schools in North America and England. He returned to Ridley where he worked until his retirement in 1979. During this period he continued to speak and teach internationally.

He also continued to write prolifically, with plenty of articles in addition to some 50 books all up. But by 1990 his eyesight was deteriorating, and a decade later he had fully developed dementia. Mildred died in 2003, after 62 years of marriage, and Leon passed away in 2006, aged 92.

His life and work are still so very important. His early writings were especially of great value since back then solid conservative and evangelical scholarship was a bit of a rarity. Morris really helped to turn all that around. Indeed, in 1951 he became the first Australian to earn membership into the International Society for New Testament Studies.

He was one of our finest biblical scholars, and in addition to his now classic trilogy on the cross of Christ, he wrote many other important volumes. A few of them include:

And then there were his numerous commentaries which have stood the test of time. His first commentary, on 1,2 Thessalonians, appeared in 1956. This was followed by commentaries on 1 Corinthians (1958), and Luke (1974), among others. His important 900-page commentary on John’s gospel in the NICNT series was released in 1971.

I believe the first work of his I purchased was his Luke commentary which I picked up in January 1976. It was around this time that he was teaching at Trinity Evangelical Divinity School in Chicago. I went to hear him one day, and I believe he was lecturing on John’s gospel.

That was my only personal encounter with the man, but it is interesting that I still recall this episode 40 years later! And back in Melbourne, I of course used to go to Ridley College quite often, especially to check out its well-stocked bookstore. I even once applied to teach there some years ago (in ethics).

There is no question that Leon Morris not only put Ridley College on the map (and now there are a number of fine, internationally noted scholars working there), but he put evangelical scholarship on the map as well. His commitment to scholarship, to Scripture, and to basic evangelical truths, has made him one of Australia’s finest Christian academics.

Morris paved the way in these areas, and has made Ridley a top evangelical theological school today. With New Testament scholars like Brian Rosner and theologians like Mike Bird now lecturing there, they are clearly following in the path first blazed by Morris.

We all owe Morris a great debt of gratitude. And if you have not yet read any of his important writings, you are missing out. Perhaps start with his three major works on the cross. They are indispensable volumes in any Christian’s library.

When we think of leading evangelical scholars and defenders of biblical teachings, we think of someone like John Stott in the UK, or D. A. Carson in America, or J. I. Packer in Canada. Leon Morris of Australia has to be added to such a list.

Let me close on a personal note. While I resonate with Morris in many areas, two minor details in Bach’s biography did stand out for me: his concern whenever he was moving that his books would be properly looked after and not damaged; and his related concern that when he moved into a new home, there would be adequate space for his large library. Now that is a man I can relate to! God bless Dr Leon Morris.