It seems every time we open a newspaper or check out the evening news we have more cases of anti-Christian bigotry and the tolerance police in action. Consider just a few more quite recent examples, beginning with the University of Sydney:

This is not a late April Fools’ Day joke. The 88-year-old Catholic Society at the University of Sydney is facing deregistration on the grounds that it requires senior members to be Catholic. In a move that has startled many of the university’s Catholic students, the society, formed in 1928, has been told that its membership requirements are discriminatory, and further funding could be denied if the Catholic stipulation is not removed.
“It’s a surreal situation,” society president Francis Tamer said. “We have been told we are discriminating against people because you have to be Catholic to be on the executive. Of course you do — we are the Catholic Society.”
One of the university’s best known Catholic alumni, Tony Abbott, agrees, saying “it seems like a hell of a double standard” given that Sydney University has long offered both a “women’s room” and a Koori Centre for indigenous students. The Catholic issue came to a head after the University of Sydney Union, which funds social clubs, this year decided to enforce a longstanding requirement that they be free of discrimination on the grounds of race, gender and religion.
Other clubs caught in the mire include the Evangelical Union, which requires members to pledge allegiance to Jesus Christ, but not the Wom*n’s Revue Society, which freely admits to producing a stand-up comedy show comprised only of “female-identifying students”.

Thankfully many have objected to this draconian threat to religious freedom:

Mr Abbott said the requirement was “sensible, because I’d assume that if you are the gymnastics club, you don’t want people coming along who have no particular enthusiasm or passion for gymnastics”.
The Catholic Society has won the support of other religious groups on campus, including the Sydney University Muslim Students Association, whose president Shahad Nomani said: “We have been toeing the line, saying you don’t have to be Muslim to join our executive, but it’s actually ridiculous. All members of our executive are Muslim but we are not allowed to say they must be Muslim.”
University Liberal Club president William Dawes said his club was also sympathetic to the Catholic Society’s cause: “We don’t force you to join the Liberal Party, but what would be the point of joining our club if you didn’t support the … party?”
The president of the university’s ALP Club, Dylan Williams, said his club “doesn’t say you have to be a member of the ALP to join our club, but we exist to promote the ideals of social democracy, so it would be weird if a Liberal wanted to join”.

Umm, is there something in the drinking water up in Sydney? I just wrote on the madness about the Evangelical Union being targeted in similar fashion up there, and now we have a Catholic club facing the same bigotry and censorship. See here for the EU story: billmuehlenberg.com/2016/03/18/the-tolerance-brigade-again-reveals-its-real-colours/

Then there is this lunacy coming out of Scotland. It seems the police there will not only patrol the streets but patrol your minds as well. Yes, the thought police are out in force, looking to hunt down any “hurtful” thoughts. Only “kind” ones will now be allowed. (See the accompanying pic.) 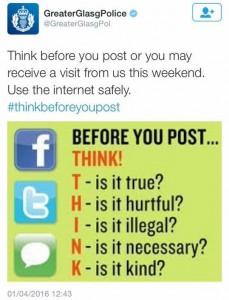 Non-Christian commentator Brendan O’Neill wasted no time dealing with this moonbattery on his FB page. He began by saying this: “Their tweet is hurtful (to freedom) and unnecessary. Shall we report the Glasgow Police to the Glasgow Police?”

He later said this: “Welcome to Britain 2016, where the police threaten to knock on your door if you say something untrue or unkind. Well, here’s some unkindness for the Glasgow Police: F**k off.”

He went on to say this: “Irony alert: if they arrested everyone who is unkind on Twitter, they’d have to arrest literally every one of the anti-trolling activists and feminists who gave them this idea in the first place, who are extremely unkind.”

I just phoned them:
“Hello, I’m a journalist in London. I’m phoning about that tweet you put out earlier warning people to think before they post stuff online. Could you please tell me what you would define as an unkind comment.”
“Erm. Ah. Erm. [Long silence. Some whispering in the background.] Can we get back to you about that?”
“Yes you can. Chop chop!”

And shortly thereafter he said this:

Police phoned me with an update. Apparently because it’s Friday afternoon there isn’t anyone around who can define what an unkind post would be. So they will get back to me on Monday. Hilarious. They warn people not to be unkind but can’t even say what that means.

When some suggested this is just an April Fool’s joke, O’Neill posted another Police Scotland tweet: “Please be aware that we will continue to monitor comments on social media & any offensive comments will be investigated.” Of course this thought police stuff has been going on for quite some time now in the West.

But when it gets to such ridiculous heights as to what is “hurtful” or not “kind”, then you know Big Brother is now running the show in the West. Indeed, many of our outrageous vilification laws do just this, making it illegal to say anything that might cause “offense” or “humiliation” or make someone feel bad.

Yeah right. Well guess what? If I say Geelong is the best footie team around, Collingwood supporters will feel bad and be offended. If I say I enjoy a good steak dinner, the vegans are going to get bent out of shape. If I say I prefer believing in God rather than chance, the atheists will throw a hissy fit. If I prefer vanilla ice cream, those into chocolate ice cream may feel aggrieved.

All this thought police madness is just that: madness. And you know, I am offended by it all. So will all this PC thuggery be made illegal because it offends me so? Somehow I just don’t think so. Welcome to our Brave New World where war has been declared against all sorts of freedoms – even freedom of the mind.

Welcome to the PC new barbarism.

11 Replies to “The West’s War against Faith and Freedom”