OK, this will be a very brief article. I have written often now about the Australian Football League and its lousy politicisation of a once enjoyable game. We used to be able to go to the footy and forget about politics and controversial social issues. Not too long ago we could enjoy a couple of carefree hours watching some sport.

But not any more: the AFL has lately been pushing one wretched PC political cause after another. It has pushed multiculturalism rounds and Islamic rounds and homosexual rounds, etc. Instead of just promoting a game, it has decided it will stand on the hot potato issues of the day.

Plenty of people are already fed up with this. I certainly am. And we have had another example of this just this weekend. At one match a banner was unfurled saying no to a mosque. This got the AFL all bent out of shape: 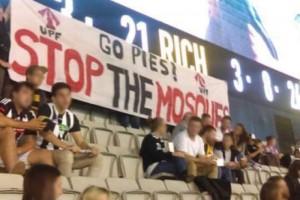 AFL boss Gillon McLachlan says he will not tolerate the game “being used to vilify” sections of the community after an anti-Muslim banner was unfurled during Friday night’s match between Richmond and Collingwood. McLachlan said the league would work with police and the Melbourne Cricket Club to identify those behind the sign, which said “Go Pies! Stop the mosques”. He said if those involved with the banner were club members they would be banned from attending games.

The AFL also issued a statement after the game: “The AFL condemns the behaviour in the strongest terms and such actions have no place in society and not in our game. Match day security removed the banner when they became aware of it and evicted the patrons responsible.”

Not to be outdone, Collingwood president Eddie McGuire said that those people responsible should be banned from football for life: “I hope the police got their names and numbers, if they’ve got anything to do with our club they’ll be banned. Get these people and make an example of them. They should be banned for life.”

Good grief. Now it is one thing if the AFL wants no controversial political topics promoted at their games. But I just mentioned that it is up to its ears in pushing various radical causes. Thus we have gross hypocrisy going on here, as well as rabid leftist politics being rammed down our throats.

As an example of this hypocrisy, consider this banner which was allowed to go ahead last September with not a peep out the AFL. Given that so many refugees coming here are in fact Muslims, this is a very political and controversial issue. But it seems the AFL is just fine with it. 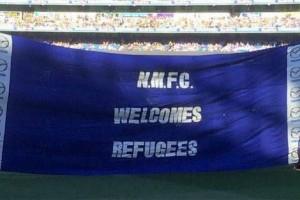 As long as it is a leftist cause, then it is full steam ahead. But dare to take a different point of view, and the AFL will crack down on you like you were a child molester. Hey AFL, I got news for you: either get out of the game of pushing radical leftist causes altogether, or spare us this blatant set of double standards.

Two more matters have been brought to my attention. Speaking of ongoing and shameless hypocrisy:

-This headline from August of last year:

-And this little titbit from Emirates Airline:

As a Pies member you can now enjoy the best prices whenever you fly around the world with Emirates. As a Premier Partner of Collingwood, Emirates offer members and their immediate family (when flying with a member) an exclusive 10% online discount on all Emirates airfares from Melbourne, Sydney, Brisbane, Adelaide or Perth.

10 Replies to “A Political and Hypocritical AFL”