Whether it is a brave soldier diving onto a live hand grenade in order to save his colleagues, or millions of young men who are overseas fighting to secure freedom and democracy back home, countless individuals are engaging in valiant acts of self-sacrifice.

While war time is of course a time of great evil, it can also be a time of great gallantry, heroism, sacrifice, dedication, and devotion. Thus many of the great virtues and character traits come to the fore on the battlefield. And given that Scripture throughout uses military and wartime metaphors, it is fitting that we look at war to find some basic Christian truths.

Plenty of Hollywood films have of course dealt with warfare in a big way. Think of some of the blockbusters dealing with the Second World War for example. We have many major WWII movies which are still popular today, such as:

Most of these films demonstrated how so very much courage, valour and sacrifice were a normal part of the war effort, as the free world banded together to stop the Nazis and the Japanese. Heroism and self-sacrifice were the needs of the hours, and millions of individuals demonstrated this during the war, including so many making the ultimate sacrifice. 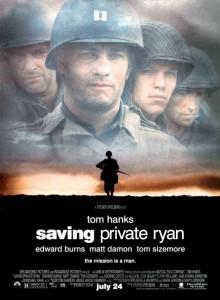 Here I want to spend the rest of this piece on the mega-hit of 1998, Saving Private Ryan. Nominated for 11 Academy Awards, this film starring Tom Hanks and directed by Steven Spielberg has become one of the great classics of this genre. I actually never did see it when it first came out.

And I have only seen it on TV in bits and pieces. I might flick through the TV with the remote and stumble upon it, and watch it to the end. It was on again the other night, so I again began transfixed by it. But I realised I have never seen the very first opening scene, so I finally caught up with that online last night.

Thus while I have not seen the entire 169-minute film in one go, I have now seen it all I believe – at least piecemeal. One day I will have to sit down for the full 2 ½ hours. Back to my topic: this film of course is all about sacrifice, so that others might live. The gospel parallels should be obvious, but let me discuss the film just a bit more first.

The film is sorta based on various true events of the past, in which a group of family members lose their lives in the same war. In this film the military brass are informed that three of four brothers from the Ryan family were killed in combat.

When it is discovered that the fourth son, Private James Francis Ryan is still alive, it is decided that he must be found and returned home. No family should have to endure this sort of agony and grief. So a mission to rescue him is implemented, regardless of the risks involved.

A team of eight men, led by Captain Miller (Hanks) goes off to find him. Included early on in the film is the remarkable 27 minute scene in which the Omaha Beach assault of June 6, 1944 is depicted in graphic detail and great realism.

(Warning, if you have not yet seen the film but want to, you may need to stop reading now – spoiler alert!)

The rest of the film involves trying to track down Ryan, who is somewhere in Normandy. He is eventually located (after some of the eight are killed) but he refuses to leave, thinking it not fair to do so. He prefers to stay with his brothers (fellow soldiers).

The film concludes with another major battle: a standoff between some of the underarmed Americans being attacked by German troops and tanks. They need to prevent the Germans from crossing a strategic bridge, and just when it seems that they will fail, and all is lost, American fighter planes swoop in and repel the advancing German forces.

In the fighting however Miller is seriously wounded. As he lies on the ground dying, he tells Ryan: “James … earn this. Earn it.” The film then finishes as it began with a present day scene involving the veteran Ryan at an American cemetery in Normandy, France.

He is there with his family, and is alone at the grave of Miller. His wife comes beside him, and he asks her if he has led a good life, if he was a good man. She assures him that he did and he is. He stands in attention and salutes the simple grave of Miller.

My description of course is of very little value, and one really has to see the film, including the moving closing scenes, to get the full and proper impact. The gospel themes are of course obvious. One man – or a group of men – risking everything, and some dying as a result, in order to save someone else.

That is the heart of the gospel message: Jesus dying so that we might live; Jesus laying down everything for us. As we find Jesus saying in John 15:13, “Greater love has no one than this: to lay down one’s life for one’s friends.” Or as Paul puts it in Romans 5:6-8:

The second theme that comes out here of course is one of gratitude. Because of what Christ has done for us, how can we not do everything for him? We spend our Christian life serving him in thankfulness for what he has done for us. Of course this film is not made by Christians, so things get a bit muddled here.

We would not tell a new convert that he has to “earn it” in the sense of earning what Christ has done for us. Salvation is a free gift of God’s grace, and we can never earn it. But if we take the phrase Miller used to Ryan and understand it in the sense of “live a life worthy of what this cost you” then it becomes much closer to the biblical message.

Yes, we should live the rest of our lives as a grateful people, dedicated fully to Christ and his Kingdom. He deserves everything from us since he gave everything up for us. It is the least we can do, to live a life worthy of the supreme sacrifice he made on our behalf.

I have always enjoyed books and films about war, especially WWII, because there are so many parallel truths to be found with Scripture. The Bible depicts the life of the believer as a life of warfare, of battle, of conflict. It demands courage, selflessness, dedication and commitment.

We are to be good soldiers for Jesus Christ, and it all goes back to his great sacrifice for us. It is now up to us to return the favour in a life of thankful service, as we seek to represent Christ to a lost world, and bring him the glory he rightly deserves.

So I encourage you to watch the film if you have not yet done so – or watch it again. For what it is worth, the final very moving six minutes of the film can be found in this video clip. I don’t know about you, but it brings me to tears every time I view it: vimeo.com/42913707

7 Replies to “Wartime, Hollywood and the Gospel”