If you wanted a nutshell description of the past 2000 years of Western history, you could put it this way: Out of paganism Christianity emerged and won the day, establishing civilisation and civility. But as Christianity waned, civilisation began to crumble and a new paganism has emerged.

That is the broad brush outline. A somewhat more detailed account is found in a letter from Lord Macaulay to an American friend, dated May 23, 1857:

The average age of the world’s greatest democratic nations has been 200 years. Each has been through the following sequence:
• From bondage to spiritual faith.
• From faith to great courage.
• From courage to liberty.
• From liberty to abundance.
• From abundance to complacency.
• From complacency to selfishness.
• From selfishness to apathy.
• From apathy to dependency.
• And from dependency back again into bondage.

You certainly find a cycle like this in the history of ancient Israel, especially as found in the book of Judges. But it well describes the West as well. And if you want an even simpler and shorter spin on all this, the line attributed to Chesterton (but never actually verified) is worth offering here: “When a man stops believing in God he doesn’t then believe in nothing, he believes anything.”

My point is this: the once great West, home of freedom, democracy, rule of law, and other vital social goods, came about because of the Judeo-Christian worldview. As Westerners increasingly reject that essential foundation, the whole structure is beginning to break apart and collapse.

As the West becomes more and more secularised, and less and less Christian – indeed, as it becomes increasingly anti-Christian – the days of the West are now being numbered. As well, into the vacuum left by Christianity are various contenders. What we are witnessing right now is a return of paganism.

What was defeated by Christianity centuries ago is now making a big comeback. And how could it not? When the one, true living God is rejected, then a plethora of false gods re-emerge and are embraced. When biblical Christianity is booted from the public square, then a host of counterfeits rush to fill in the empty space. 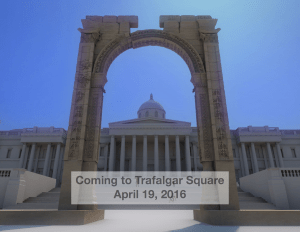 And we are now seeing this happening – quite literally. Pagan temples are being built in major public spaces. Consider the pagan altars being erected in New York and London in just over a week. It all sounds rather benign by one of the groups pushing this:

On April 19, 2016, in cooperation with national and international cultural heritage preservation organizations, and in conjunction with World Heritage Week 2016, the Institute for Digital Archaeology will install a monumental scale reconstruction of Palmyra’s Triumphal Arch on Trafalgar Square. Through this project — and others like it scheduled throughout 2016 in cities both inside and outside the Middle East — the IDA seeks to provide an optimistic and constructive response to the ongoing threats to history and heritage that have captured headlines over the past year. Our aim is to highlight the potential for the triumph of human ingenuity over violence by offering innovative, technology-driven options for the stewardship of objects and architecture from our shared past.

But things are rather more sinister than this. Many articles have been penned on this already. Let me mention just one. It begins:

A reproduction of the Temple of Baal is coming to New York’s Times Square next month as a tribute to the 2,000-year-old original structure that was destroyed by ISIS last year in Palmyra, Syria. The reproductions will be made using a 3-D printer, producing a life-size model of the temple’s entrance. Officials say those models will be installed in both New York City and London’s Trafalgar Square this Spring. Many are speaking out against putting up a monument in honor of a temple that promoted worship of a false god.
In an article for World Net Daily, Matt Barber explains some of the elements of Baal worship.
“Ritualistic Baal worship, in sum, looked a little like this: Adults would gather around the altar of Baal. Infants would then be burned alive as a sacrificial offering to the deity. Amid horrific screams and the stench of charred human flesh, congregants – men and women alike – would engage in bisexual orgies,” Barber wrote. “The ritual of convenience was intended to produce economic prosperity by prompting Baal to bring rain for the fertility of ‘mother earth,'” he explained.

Many Christian groups are also springing into action about this, with major prayer and intercession being called for. In the UK the Voice for Justice put out this release: “To the Mayor of London, Boris Johnson, and Roger Michel, executive director of the Institute for Digital Archaeology: Do not celebrate the occult. Abandon plans to reconstruct the Arch of Palmyra in Trafalgar Square on April 19.”

They said in part:

Even more disturbing is the date chosen for the reconstruction of the monument, because in occult belief, April 19 marks the Feast of Moloch, another ancient Canaanite god, specifically associated with Baal (e.g. Jeremiah 32:35), who also demanded child sacrifice. April 19 marks the first day of a thirteen day period known as the “blood sacrifice to the beast,” and culminates in the high occult holy day of Beltane on 1st May. It was a period regarded as hugely significant in the worship of Baal, dating back to Enmarkar, one of the ancient kings of Babylon – known in the Bible as Nimrod – who eventually came to be worshipped as a god.
In the last few years the occult, and more particularly Satanism, has been enjoying a clear resurgence of interest, as evidenced by claims in The Daily Express that Jimmy Savile was a practising Satanist (www.express.co.uk/news/uk/370439/Jimmy-Savile-was-part-of-satanic-ring), and the Royal Navy’s acquiescing in the practice of Satanism in October 2015 (news.bbc.co.uk/1/hi/uk/3948329.stm).
It need hardly be said that for those who follow the occult, certain dates are seen as highly potent, carrying immense spiritual power. Without question, April 19, marking the period of blood sacrifice leading up to Beltane, is one of the most significant dates in the Satanist, occult calendar.
Was the selection of this particular date to reconstruct an ancient monument to the god Baal random or deliberate? Either way, it is extremely unfortunate, to say the least. If it was a coincidence, it is a highly remarkable and appalling one.
Secularists may well claim that they fail to see any significance in this project and its timing, and that non-believers are religiously neutral. But in fact we are all being presented with a choice: whether to align ourselves with a project with patent Satanic associations, and so to support them, or to distance ourselves from it. There is no neutral or middle way.
If we allow the erection of this Arch we will be placing a symbol of death, murder, child sacrifice and sexual immorality in the heart of London. Any such image is explicitly forbidden in the Bible, so that as a symbol its presence is an insult to Christianity. It also carries spiritual force. Many Satanist groups, for example, believe that some day Baal will be resurrected and take his place as ruler of the world. Equally, some Christian scholars believe there is some sort of connection between the ancient figure of Nimrod and the Antichrist – so that the reconstruction of this Arch may well be seen as opening up a spiritual gateway.
While, therefore, fully supporting the work of IDS and their efforts to preserve the world’s heritage against destruction by ISIS, we call on them to abandon this ill-advised, anti-Christian, and pro-Satanist, project in its entirety. And we call on the Mayor of London to uphold the UK’s Christian heritage and ban the erection of a monument that is clearly hostile to Christian belief.

In the US prayer groups have also mobilised. Jeff Daly from the National Day of Repentance wrote:

This is the same spirit of anti-Christ that drew the Israelites to build the golden calf instead of worshiping the Living God who had just saved them. It’s the same spirit that pulls me and you into the world to spend more time on our Facebook than in our “Faithbook,” the Bible. It lures us to spend wasted zombie hours in front of a television or a computer instead of spreading Jesus’ love one-on-one to family members and neighbors.
The test could not be more obvious. During this same time as the Baal Temple is erected in NYC and London, believers in Jesus Christ in the United States can move closer to the Living God in a significant move of repentance. For example, one ministry in Pennsylvania has declared this a “Week of Repentance” [www.revivalmatters.com]. Also, on Saturday April 9th in Los Angeles “Azuza 2016” [www.thecall.com/azuza] will draw tens of thousands to worship, pray and repent, seeking a mighty move of the Holy Spirit. That same day, God willing, thousands of pastors will come to Washington D.C. to the Lincoln Memorial with “United Cry/DC 16” [www.unitedcry.org] where there will be worship and prayer and times of repentance. A recommendation will be made at that event for further prayers of repentance for the next 21 days leading up to another key event: The National Day of Repentance on April 30th. The National Day of Repentance, along with the National Day of Prayer on May 5th, is also supported by prayer teams in Australia and New Zealand.

Prayer and repentance are certainly crucial here. It is because we have abandoned God and allowed the West to revert to paganism that we see all this taking place. And without heartfelt prayer and repentance we can expect to see much more of this blatant and proud paganism in the days ahead.

And this is not all just because of ‘bad guys out there’. It is also because Western believers have left their first love and allowed themselves to become compromised, carnal and careless. Thus the church must repent big time. Unless the church takes responsibility for so much of this, and confesses its many sins and seeks the mercy of God, we are finished.

So let this revival of paganism in our major Western cities serve as a wakeup call to all true Christians. We better get right with God and quick, or the West may well be history, and we will return to a new barbarism and paganism. And it sure won’t look pretty.

12 Replies to “The Return of Paganism”