Yesterday I penned a piece on choosing a religion. On such a complex and important topic such an article could only be the briefest of brief introductions. So here I want to pad things out a bit more, even though this too will be a very brief outline of this vital matter.

Religions and worldviews need to be carefully evaluated. They are not all the same, and some are preferable to others. Given that mega-themes like truth and error, life and death are bound up in a worldview, it is imperative that we be wise and discerning as we seek one we can commit ourselves to. 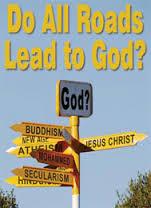 So let’s explore further the range of options available to us. While plenty of sources for all this can be mentioned, let me say that much material from two terrific Christian apologists have been drawn upon here: Norman Geisler and Francis Schaeffer.

When it comes to the question of God and his existence, we really have three major options available to us:

-Agnosticism. The belief that one cannot be sure that there is a God. However complete agnosticism or skepticism is self-defeating: to say absolutely that you cannot know anything absolutely is a contradiction in terms.
-Atheism. The belief that there is no God, and that everything came about by time plus chance. But there is a problem here as well. Most people will admit their knowledge is quite limited. There is more to be known than what we know. Thus what is outside our field of knowledge may include God. If a person knew all things, he would have to be God!
-Theism. The belief that God exists. This of course is the option of most major religions, be it Judaism, Islam, Christianity, Hinduism.

And as would be expected, we also have major theism options to consider. Four of the main ones are these:

In brief we can say that the four main worldviews currently in vogue are these:

So how might we assess these various worldviews and religions? One way to do this is to see if a worldview is reductionistic, that is, if it reduces complex things into overly simplistic parts. Many of our contemporary worldviews are in fact reductionistic:

Another way to assess worldviews and religions is to see how they stack up in terms of transcendence and immanence. That is, if God exists, is he only aloof and uninvolved in the world (transcendence) or is he only part of the world (immanence)?

Of the major theistic options, only Christianity gets the right mix here. He is both transcendent and immanent. He is high and lifted up, but he also dwells with those who are meek and lowly. But pantheism denies God’s transcendence. Deism denies God’s immanence. See more on this here: billmuehlenberg.com/2013/08/05/on-gods-immanence-and-transcendence/

Let me finish with some frameworks for assessment put forward by Francis Schaeffer. One thing he used to speak of was the Reality Matrix. He said that in terms of how we came into being, we really have only two main questions to consider:

-Did everything begin from a personal or impersonal beginning?
-Is ultimate reality either finite or infinite?

While there are many details, these two main questions really get to the heart of the matter. He offered a diagram with the personal on top and the impersonal on bottom, the finite to the left and the infinite to the right. He then filled in the diagram as follows:

Out of that schema he offered more detail in his apologetic method. Schaeffer argued that there were three major philosophical problems that have to be addressed by any system of thought:

1). The issue of metaphysics. Things exist. The universe exists in all its complexity, and mankind exists with his personality. How do we account for this? He said that there are only three basic answers:

Another way to look at this is to again examine the two issues of personality and infinity. The Roman and Greek gods were personal but not infinite. The gods of the East were infinite but not personal. In Christianity, God is personal as is man; but he is infinite whereas man is not. So we share with God on the issue of personality, but share with the rest of the created order finitude:

2). The issue of ethics. Man is personal yet finite. He is great yet depraved. How do we account for the Adolf Hitlers and Mother Teresas of the world? The ‘manishness of man’ as Schaeffer put it, has to be accounted for. There are two issues here:

Schaeffer argues that Christianity again best accounts for, or answers, these questions. Men are made in God’s image. Relationships and personality were built into the Trinity. Also, evil is not intrinsic to God’s world. It is inconsistent with God’s original intentions and is therefore an abnormal feature of our current existence. This has four advantages:
-It explains evil without making God the author of evil.
-It means there is a solution to evil to hope for.
-We can therefore challenge evil in the world without challenging God (the problem for Sartre in The Plague).
-It gives us a moral standard, based on God’s character.

-Grave cynicism. There is no meaning or purpose to life, and even if there were, we could never know it. So nihilism, despair, cynicism are the results.
-Romantic mysticism. Much of the new age falls under this category.

Christianity gives us epistemological answers. Schaeffer spoke about “true truth”. We do not know truth exhaustively but we know truth truly. God is a rational God who has revealed himself to us in propositions, in truths, in language. Thus we can know truly, but because we are finite we cannot know exhaustively.

Schaeffer uses the example of Sartre: as an existentialist he had no basis for morality, yet he signed the Algerian Manifesto, condemning France for its presence in Algeria. He also uses the example of a Hindu at Cambridge who said evil was an illusion, insisting that there is no difference between cruelty and non-cruelty. Then a quick-thinking student stood over his head with a hot water jug in a menacing fashion. When the Hindu nervously asked him what he was doing, the student simply replied, ‘there is no difference between cruelty and non-cruelty’. With that the Hindu got up and walked out of the room. His worldview was caught out by reality. This can be illustrated as follows:

When you get the person to face his point of tension, then you can present the gospel to him. And Schaeffer put that to very good use indeed. For more on his life and ministry, as well as resources of his to follow up with, see here: billmuehlenberg.com/2009/10/14/notable-christians-francis-schaeffer/

Well, we have covered very much ground here. For some, more questions might arise than answers! But when it comes to various truth claims and worldviews, we are all called to do some homework. Not all religions are true. So we must examine them, and seek to determine where truth can be found.

As I stated in my previous piece, I believe that the one worldview that best explains the big questions in life, and best accounts for life as we find it is biblical Christianity. So those who are still seeking are asked to think carefully and study carefully.

All roads do not lead to God. But one most certainly does. It is hoped if you are in the process of seeking truth, that you seriously consider the truth claims of Christianity.

My companion piece, “On Choosing a Religion” can be found here: billmuehlenberg.com/2016/04/26/on-choosing-a-religion/

2 Replies to “On Assessing a Religion”