As is so often the case, a good thing can be perverted and end up causing great harm. This can be true of compassion when it is misunderstood and misapplied. Christians can often forget that while compassion towards people is warranted, compassion to various ideas, lifestyles, actions, beliefs, and worldviews is not.

It seems every time I open another Christian website or look at a Christian magazine, I get more of this misplaced and misused compassion. I read about how we must not speak ill of the homosexual agenda because that is not showing compassion to homosexuals.

In the various battles we find ourselves in, with activists groups specifically targeting Christianity, being naïve here helps no one. Indeed, it gives aid and comfort to those who have declared war on Christianity, and it weakens and undermines the faith itself, and those who are seeking to defend it.

First, there is no inconsistency between defending our culture from the latest sexual “reform” and loving our neighbors. It is compassionate to women and children to argue that governments and businesses shouldn’t render them more vulnerable to sexual predators. And if you believe the words of the Bible, there is nothing compassionate about acquiescing in the latest cultural demand to normalize immoral and troubled behavior. Yes, transgender men and women need the love of Jesus, but if by our words or deeds we contribute to the notion that their “transitions” are perfectly acceptable, we’re contributing to their own tragic self-mutilation.
Second, when one actively opposes Christians who are seeking to preserve religious liberty and opposing the relentless march of sexual decadence, then they marginalize and isolate their own brothers and sisters. For those few Christians who have the courage to stand against censorship, there is nothing more discouraging than enduring opposition and vitriol from fellow believers. I’ll never forget comforting a sobbing Christian client who filed suit to allow her Christian club to stay on campus — only to wake up the next morning to discover that a coalition of pastors and ministry leaders were the first to oppose her. 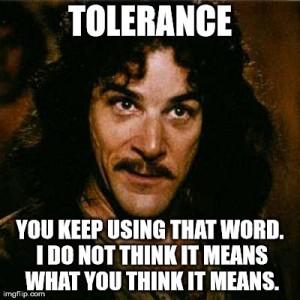 The compassionistas seem to think that the only Christian virtue there is is compassion. Well, no, there are others. Like truth, righteousness, holiness and so on. Jesus certainly did not appear very loving and compassionate when he deliberately formed a whip and used it in the temple, overthrowing tables and causing mayhem.

Indeed, why do I suspect that far too many believers today would insist that the temple cleansing was a decidedly unchristian act? If Jesus did the same today I really believe many Christians would rebuke him for it: ‘Jesus, that is so unloving! You need to be compassionate, and not so judgmental! That is so unChristlike!’

The perversion of compassion is part and parcel of the perversion of tolerance. We have bought a fundamentally flawed understanding of tolerance, and run with it just as any non-Christian will. Instead of thinking clearly and biblically, we simply embrace whatever mental and moral mushiness the world is dishing up at the time.

It is time to get biblical here, and say no to the world’s falsehoods and deceits. Some people were aware of all this decades ago. For example Bishop Fulton J. Sheen penned a terrific piece back in 1931 called “A Plea for Intolerance”. It is an absolute winner of an essay, and we all should have a read of it. You can read the whole article here: www.northamericanmartyrs.org/pdf/Plea-for-Intolerance.pdf

Let me offer a few snippets from it. He begins:

America, it is said, is suffering from intolerance. It is not. It is suffering from tolerance: tolerance of right and wrong, truth and error, virtue and evil, Christ and chaos. Our country is not nearly so much overrun with the bigoted as it is overrun with the broadminded. The man who can make up his mind in an orderly way, as a man might make up his bed, is called a bigot; but a man who cannot make up his mind, any more than he can make up for lost time, is called tolerant and broadminded. A bigoted man is one who refuses to accept a reason for anything; a broadminded man is one who will accept anything for a reason – providing it is not a good reason.

And one more great quote:

Others have also sought to give us some clarity on these vital matters. For example, in his 1992 volume Uncommon Decency Richard Mouw wrote:

Christian civility does not commit us to a relativistic perspective. Being civil doesn’t mean that we cannot criticize what goes on around us. Civility doesn’t require us to approve of what other people believe and do. It is one thing to insist that other people have the right to express their basic convictions; it is another thing to say that they are right in doing so. Civility requires us to live by the first of these principles. But it does not commit us to the second formula. To say that all beliefs and values deserve to be treated as if they were on a par is to endorse relativism – a perspective that is incompatible with Christian faith and practice. Christian civility does not mean refusing to make judgments about what is good and true. For one thing, it really isn’t possible to be completely nonjudgmental. Even telling someone else that she is being judgmental is a rather judgmental thing to do!

John Stott put it this way:

Tolerance is not a spiritual gift; it is the distinguishing mark of postmodernism; and sadly, it has permeated the very fiber of Christianity. Why is it that those who have no biblical convictions or theology to govern and direct their actions are tolerated and the standard or truth of God’s Word rightly divided and applied is dismissed as extreme opinion or legalism?

Or as A. W. Tozer said in Man: The Dwelling Place of God:

A new Decalogue has been adopted by the neo-Christians of our day, the first word of which reads ‘Thou shalt not disagree;’ and a new set of Beatitudes too, which begins ‘Blessed are they that tolerate everything, for they shall not be made accountable for anything.’ It is now the accepted thing to talk over religious differences in public with the understanding that no one will try to convert another or point out errors in his belief. . . . Imagine Moses agreeing to take part in a panel discussion with Israel over the golden calf; or Elijah engaging in a gentlemanly dialogue with the prophets of Baal. Or try to picture our Lord Jesus Christ seeking a meeting of minds with the Pharisees to iron out differences.

Archbishop Charles J. Chaput put it as follows: “We need to remember that tolerance is not a Christian virtue, and it’s never an end in itself. In fact, tolerating grave evil within a society is itself a form of evil.” And Chesterton of course famously said this: “Tolerance is the virtue of the man without convictions.”

But perhaps still my favourite quote on this comes from Dorothy Sayers, the great English writer:

It is time we starting thinking straight about what tolerance actually means. And with this, we must start thinking rightly about what compassion actually means. Tolerating evil is never a compassionate thing to do. Indeed, as we are clearly told in Romans 12:9, we are to “Hate what is evil; cling to what is good.”

Showing compassion to unrighteous, ungodly and false worldviews, beliefs and practices is not being compassionate. Jesus knew all about compassion and demonstrated it fully. Yet when he compassionately dealt with the woman caught in adultery, he strongly warned her to “go and sin no more”.

Those are five essential words, but so often they go missing for so many believers today. They want to appear to be compassionate, but when they allow sin to go unchecked and sinners to slide into a lost eternity, that is not compassion. That is not love. That is cruel indifference and carnal compromise.

We must love as Jesus loved. That includes standing for righteousness and proclaiming the truth. Failure to do so is not compassionate, and is not Christian.