Barack Hussein Obama’s reign of terror has been hellish for America and the American people, but it seems he is happy to cause even more widespread destruction and ruin before a new POTUS is put in place. Ever ready to push the agenda of the cultural Marxists, his latest outrage has got millions and millions of Americans up in arms.

Forcing outrageous dictates upon a hapless populace has been the hallmark of this imperial presidency. And he has done it again with this deplorable decree about transgender bathrooms. One news report discusses this matter as follows:

The Obama administration told U.S. public schools on Friday that transgender students must be allowed to use the bathroom of their choice, upsetting Republicans and raising the likelihood of fights over federal funding and legal authority.
Conservatives pushed back against the administration’s non-binding guidance to schools, the latest battleground in the issue of rights for lesbian, gay, bisexual and transgender Americans. Texas Attorney General Ken Paxton said the guidance “must be challenged.” “If President Obama thinks he can bully Texas schools into allowing men to have open access to girls in bathrooms, he better prepare for yet another legal fight,” Paxton, a Tea Party champion, said in a statement.
Other Republican-led states joined calls to disregard the White House’s directive and accused the administration of overstepping its role. In North Carolina, Governor Pat McCrory labeled the move a “massive executive branch overreach” and called on federal courts and the U.S. Congress to intercede, while Arkansas Governor Asa Hutchinson said it was “offensive, intrusive and totally lacking in common sense.”
The U.S. Education and Justice Departments, in a letter, told school districts nationwide that while the guidance carries no legal weight, they must not discriminate against students, including based on their gender identity. The guidance contained an implicit threat that school districts defying the Obama administration’s interpretation of the law could face lawsuits or be deprived of federal aid. 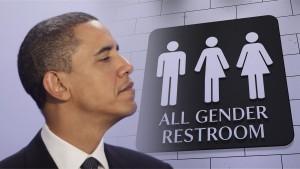 Incredibly, Education Secretary John King Jr. said this about the imperial decree: “No student should ever have to go through the experience of feeling unwelcome at school or on a college campus”. Oh really? What about all the school girls who feel unwelcome in a bathroom with men in it?

What about all the students who rightly believe males should not be in female facilities, nor females in male ones? What about Christians who are made to feel unwelcome every single day with these increasingly anti-Christian agendas being foisted upon them?

King went on to say that all students should “have the opportunity to get a great education in an environment free from discrimination, harassment and violence.” So a male pervert getting his cheap thrills by checking out the chicks in a women’s bathroom is going to be a harassment-free environment? Is he serious?

Can Obama and King guarantee that there will be no rapes, cases of sexual assault, and sexual harassment under this new policy? Only a fool would believe that. This demonic presidency has discriminated against over 99 per cent of the American population with this malicious and moonbat policy.

I guess it is only a tiny, tiny percentage of people that the Obama administration really cares about, and the rest can just go to hell it seems. Make no mistake about this: this is a declaration of war on faith, on freedom, and on family. It is also a war on reality, on biology, and on common sense.

Such is the diabolical nature of the Obama White House. As noted, plenty of concerned voices have already been heard concerning this madness. Franklin Graham said this:

Who does President Barack Obama think he is? The sultan of Washington? Does he think he can just make a “decree” and we will bow down and simply obey? The decree he released today says that all schools across the country have to allow students to choose the restrooms and locker rooms according to “their internal sense of gender.” If schools don’t comply, he threatens loss of funding and lawsuits from the federal government. What about the privacy and protection of all the other students? Isn’t this discrimination against all of them? This opens up bathrooms to sexual predators and perverts. A decree does not carry the force of law–that’s the job of Congress. The president obviously must have no fear of God, who made us and created us male and female. I hope that school districts across this nation will defy President Obama and his administration’s radical progressive agenda to promote and advance the sin of homosexuality and the LGBT agenda.

Matt Walsh put it this way:

It should go without saying that the president is acting far beyond his constitutional authority here. I have perused Article Two of the Constitution and I find nothing granting the federal government the power to set bathroom guidelines for all 98,000 public schools in the nation. Obama has never let such trifles slow him down in the past, I realize, but this may actually represent his most strikingly dictatorial and illegitimate action to date.
The man, drunk and deranged with power, now thinks he can decide with narrow specificity where and how young girls across the country undress. They may have privacy behind the door of a bathroom stall, he permits, but not behind the door of a bathroom. They may use a curtain to shield themselves from the prying eyes of hormonal teenage boys, but they may not use the locker room itself for that purpose. They may segregate themselves from regular boys, but not from boys with mental delusions or cross dressing fetishes….
The only two groups who really believe in “transgenderism” as a legitimate concept are intellectually malleable college kids and the mentally ill. As much as the president sometimes appears to belong to the latter group, he does not. That would be letting him off the hook. For him and most progressives above the age of 30, “transgenderism” is a calculated ploy. They are subjecting children to abuse and taking advantage of the mentally ill simply as means to an end. They know better. They’re not crazy and they’re not dumb.

I warned you in my book, “God Less America” that the fight over transgenderism would be the next battleground. And here we are — a nation where boys who identify as girls have more rights than girls who were born biological girls.
“It’s an outrageous attack on our Creator Himself, upon human sexuality and morality and a further advancement of the flagrant attack on religious freedom in our culture,” Southern Baptist Convention President Ronnie Floyd told me.
The leader of the nation’s largest Protestant denomination said the president’s decree is an extreme overreach by the federal government and he called on Christians to speak out. “Sooner or later we have to determine that enough is enough,” he said. “It’s not going to change until Christians get involved in this battle.”…
One of the most forceful rebukes came from Tennessee Congresswoman Diane Black.
“I believe the Obama administration is now directly responsible for endangering our students,” she said. “It is worth nothing that this directive does not carry the force of law — and I would encourage Tennessee school officials to continue following their consciences.”
Family Research Council President Tony Perkins told me Congress must intervene to stop what he called an imperial president. “If the president chooses to go forward with this outrageous order — then Congress should begin impeachment proceedings,” he said. Perkins said the decree should be “resisted with ever legal and moral instrument we have available to us in this country.”
“Every parent, every school board in America should absolutely refuse to sacrifice the safety of their children for the threat of taking away nine federal pennies that make up every educational dollar,” he said.
Resist! That’s the message from Penny Young Nance, president of Concerned Women for America. “The left always uses children to accomplish its goals of social reengineering,” she said. “The adults closest to these children should decide what’s best for all the children in the school. Safety and kindness should be the guiding principles, not threats from the bullies in Washington.”
The time has come for all Americans to stand up and defy this president’s immoral agenda. If losing federal funding is the price we must pay to protect women and children – then so be it. We will not betray what we know to be true for the government’s 30 pieces of silver.

Exactly right. A petition is already being circulated, and I urge all of you to sign it:

Petition to U.S. House Speaker Paul Ryan:
The Obama administration’s overreach in bullying parents and local school districts by threatening the loss of federal dollars if they do not follow its guidance in allowing students to use facilities such as restrooms, showers, and locker rooms of the opposite biological sex is both unlawful and dangerous to our children.
This has gone too far. The U.S. Congress is still the voice of the American people. It is past time that Congress stands up to the unlawful actions of this president. If Congress will not resist President Obama’s overreach into the bathrooms, showers, and locker rooms of our nation’s schools, then who will? I, the undersigned, strongly urge you to take action to protect our children and stop the Obama administration’s radical overreach.

Obama is a tyrant totally out of control. And Hillary Clinton will only offer more of the same. But if people foolishly think that someone like Trump will put an end to all this, they are dreaming. He has already come out a number of times now saying he has no problems with such transgender madness.

God have mercy on America.

23 Replies to “Obama’s Declaration of War on Our Children”