The Bible, a collection of 66 books written by around 40 different authors over some 1500 years is really one book. That is because in addition to the human authors there is a divine author, so the whole thing is a cohesive unit. The message of Scripture is really one message.

Thus the core gospel truths we find in the New Testament should be expected to be found in the Old, even if in less fully developed form. As Augustine once put it, “The new is in the old contained, the old is in the new explained.” So we should expect to see NT truths found throughout the OT.

Let me therefore consider the book of Job, and show how so many classic NT themes about salvation and redemption are found there. It is in fact rather remarkable how so much of the book of Job is directly or at least indirectly, linked to the Christian gospel, at least in shadow form.

And this is all the more remarkable when we consider just how old this book is. Many have suggested it is the oldest book in the Bible, predating even the Pentateuch in its composition. We do not know when exactly it was written, but what we find in the book (the lack of any mention of covenant, law, the temple, etc) suggests that it goes back at least as far as to the time of the Patriarchs. (Determining when the final form of the book’s composition took place is another matter.) 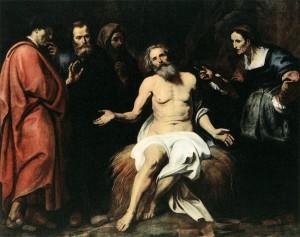 So the point is, Job may have had no direct or specific revelation from God. There was no Old Testament written at this point. There certainly was no New Testament. Job knew nothing about Jesus Christ, and did not have the advantage of the indwelling Holy Spirit to sustain him through all his trials and hardships.

And yet throughout, he was a man of faith. He trusted God, even though he may not have known a whole lot about God. And in the course of these 42 chapters we find plenty of gospel truths. And we also find plenty of pain, suffering and hardship.

So often when believers today face difficulties and trials, their faith wavers – even though we have everything: a full Bible, Jesus, the Holy Spirit, etc. We so easily give up at the slightest difficulty or bit of suffering. We are a pretty faithless bunch today.

On the other hand, Job went through more than most of us ever will, yet his faith stood strong. Despite losing everything, his trust in God for the most part did not waver. Sure, he regretted the day he was born, but he certainly did not curse God as his foolish wife suggested.

In fact, he displayed great faith here. As we read in Job 2:10: “He replied, ‘You are talking like a foolish woman. Shall we accept good from God, and not trouble?’” As Charles Colson put it in his book Loving God,

So obedience is the key to real faith — the unshakable kind of faith so powerfully illustrated by Job’s life. Job lost his home, his family (except for a nagging wife), his health, even his hope. The advice of friends was no help. No matter where he turned, he could find no answers to his plight. Eventually he stood alone. But though it appeared God had abandoned him, Job clung to the assurance that God is who he is. Job confirmed his obedience with those classic words of faith: “Though he slay me, yet will I hope in him” (Job 13:15).
This is real faith: believing and acting obediently regardless of circumstances or contrary evidence. After all, if faith depended on visible evidence, it wouldn’t be faith…. It is absurd to constantly seek new demonstrations of God’s power, to expect a miraculous answer to every need, from curing ingrown toenails to finding parking spaces; this only leads to faith in miracles rather than the Maker. True faith depends not upon mysterious signs, celestial fireworks, or grandiose dispensations from a God who is seen as a rich, benevolent uncle; true faith, as Job understood, rests on the assurance that God is who he is. Indeed, on that we must be willing to stake our very lives.

But let me look at some of the gospel components found in this book in a bit more detail. Again bear in mind how early this book is, or at least how early the events are as described in the book. Without any special revelation from God, Job seemed to have many biblical truths down pat.

For example, Job was aware of the significance of man, and his standing with God. As he asks in 7:17:
“What is mankind that you make so much of them,
that you give them so much attention?”

The basic truths found in the Bible, beginning in the earliest chapters of Genesis, are found here: man is unique and is created by God, and is in the image of God. He has a unique relationship with the Creator. Job may not have put it in those terms, but he was aware of these basic concepts.

But he was also well aware of another core truth: something is wrong, and man is not right with God. Man is separated from God and something must be done about it. He realises that there is a real moral and spiritual chasm between God and man, and that this is a pressing problem indeed. Three times in this book we have this fundamental problem spoken to by three different characters:

-Job 4:17 Can a mortal be more righteous than God? Can even a strong man be more pure than his Maker? (Eliphaz)
-Job 9:2 Indeed, I know that this is true. But how can mere mortals prove their innocence before God? (Job)
-Job 25:4 How then can a mortal be righteous before God? How can one born of woman be pure? (Bildad the Shuhite)

All three men understood the problem: God is righteous and we are not. This is the heart of the gospel: sin has separated us from God, and something must be done about it. Man needs a mediator. Someone must stand between a holy and righteous God and sinful men. As Job states in 9:32-35:

He is not a mere mortal like me that I might answer him,
that we might confront each other in court.
If only there were someone to mediate between us,
someone to bring us together,
someone to remove God’s rod from me,
so that his terror would frighten me no more.
Then I would speak up without fear of him,
but as it now stands with me, I cannot.

Yes a go-between is sorely needed. And Job even believes that such a one exists. There is in fact a mediator. There is a redeemer. There is someone who can bridge the gap and correct the predicament we find ourselves in. As we read in Job 19:25-27:

I know that my redeemer lives,
and that in the end he will stand on the earth.
And after my skin has been destroyed,
yet in my flesh I will see God;
I myself will see him
with my own eyes—I, and not another.
How my heart yearns within me!

That is tremendous faith. He believes. He has hope. He knows that his redeemer lives. Indeed, as we read later in Job 42:5: “Before I heard of God, but now I have seen him”. This in fact fulfills his longing as uttered in Job 19:25-27. He once had head knowledge of God, but now he has a real encounter with him.

Of course all this is not to say that Job had a full blown (that is, New Testament) understanding of life after death, resurrection, and so on. But he had eyes of faith to believe that somehow a redeemer exists and somehow he will one day see him.

Would that Christians today even have this much faith as they go through various trials and hardships. We tend to wimp out at the slightest difficulty and bout of suffering. We question God, we challenge God, we get mad at God, we accuse God.

And yet we have far more specific revelation from God than Job ever did. We should have even greater faith than Job, given all that we now know and all that we now have. Job knew little and had little (compared to us today). But he had great faith which sustained him.

All the longing, searching and questioning found in this book comes to full fruition in the New Testament. The hints at the gospel in the book of Job became crystal clear when we get to the life and ministry of Jesus. So the Bible really is one book, with one revelation, and one story to tell.

And faith is always key in all this. Job had great faith. Do we?

6 Replies to “The Gospel According to Job”