The Total State wants nothing standing in between it and the naked individual. Complete control by the authoritarians is much easier that way of course when there is no one to mediate between the person and the All-Powerful State. Things like independent unions, churches, families and voluntary societies are all targeted when the Police State takes charge.

That is why families and churches are especially in the crosshairs of the militant social activists. They know that if these two institutions can be destroyed or neutralised, then the Totalist State has a free run. I have warned about this repeatedly, including in this recent piece: billmuehlenberg.com/2016/04/08/cultural-marxism-war-family/

This is how we must understand the homosexual and transgender juggernaut which is crushing everything in its path. These identical twins are involved in an effort to subvert and overthrow biblical morality and marriage and the family. The war on the sexes is a very vital component of all this. 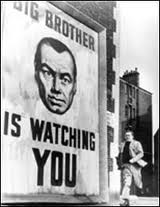 Destroy the very concept of male and female and you go a long way to destroying culture – certainly any culture based on biology, normality, reality, and the Judeo-Christian worldview. That is the endgame for the sexual revolutionaries: destroy it all.

So the hyper-drive for trans’ rights is just the latest manifestation of all this. De-sex society and you destroy society. And then the State gets complete control over everything and everyone. And the activists have spilled the beans on this, so don’t take my word for it.

I have already mentioned how the Marxist trans-activist Roz Ward who developed Australia’s Safe Schools program has openly admitted that this is not at all about bullying, but about implementing the Marxist cultural, social and sexual agenda.

And in America we have activists like Riki Wilchins who write in mainstream homosexual outlets like The Advocate, saying “We’ll Win the Bathroom Battle When the Binary Burns”. The subtitle to the article says it all: “Ending our culture’s obsession with what’s ‘male’ and what’s ‘female’ will be our salvation”.

In the piece he/she says that we must move beyond the two sexes: “You have to instead critique the heterobinary structure itself.” The article concludes as follows:

What really needs to be contested here is not just our right to use bathrooms with dignity (which would personally be very welcome), but the entire underlying hetero-binary structuring of the world queers must inhabit. This is the real struggle, and queer activists have been talking about it at least since the 1970s of Gay Liberation, even as the movement it spawned has continued to nudge it aside. All of which is to say, transgender advocates and their allies are doing incredible work. But they have finally and perhaps unwittingly opened the gender Pandora’s Box, and over the next few years all sorts of unexpected non-binary things, like Maria, are about to come popping out. This is going to be interesting.

As Peter Sprigg of the Family Research Council put it, “The long-term goals of many LGBT activists are actually not just access to the restrooms of their preferred gender identity, but actually destroying the concept of gender or the separation of the genders altogether.”

Or as Rod Dreher wrote, “That is to say, they want to destroy the concepts of male and female entirely. This is what they’re after, and they’re not going to stop until it is accomplished.” Stella Morabito, who has written often on this issue has a brand new article which is well worth highlighting. Entitled, “A De-Sexed Society is a De-Humanized Society” she notes how Big Brother and the sexual anarchists are in bed together on this.

President Obama’s transgender directive isn’t about civil rights or bathroom use. It’s about state control over personal relationships. As usual, tyranny comes disguised as “civil rights.” The latest exhibit of this general rule is President Obama’s directive that seeks to force a transgender bathroom, locker room and dorm policy on the entire nation, starting with schoolchildren. Many of us are taken aback by this news, but we really shouldn’t be. The order is merely the latest incarnation of a long line of social engineering. The goal, as is always the case with such movements, is to remake humanity. What the people behind this latest version won’t tell you is that their project requires each and every one of us to deny our own humanity.

She reminds us that “Without Sex, There Are No Families” and goes on to say this:

What will happen when all of society is sexless in both language and law? If the law does not recognize your body as physically male or female—applying only the word “gender” to your internal, self-reported self-perception—does the law even recognize your body? Every single cell of you has either “male” or “female” written into its DNA, but the law refuses to recognize such categories. Such laws will only recognize an infinite, immeasurable “gender spectrum,” your place on which is determined only by your mind. So what exactly are you after the law has de-sexed you? In what sense is your body a legal entity?
And what happens to your familial relationships after the law has de-sexed you? Are they legally recognized? I don’t see how they could be. Certainly not by default, certainly not by the recognition that each child comes through the union of two opposite-sex parents.
In a society de-sexed by law, would the state recognize your relationship as a husband or a wife? Mother or father? Daughter or son? Those are all sexed terms. A system that does not recognize the existence of male and female would be free to ignore the parentage of any child. You might be recognized as your child’s “legal guardian,” but only if the state agrees to that. Anybody can be a guardian to your child if the state decides it’s in the child’s “best interest.” In this vision, there is nothing to prevent the state from severing the mother-child bond at will.
In such a scenario, the state controls all personal relationships right at their source: the biological family. The abolition of family autonomy would be complete, because the biological family would cease to be a default arrangement. The “family” would be whatever the state allows it to be. Again, in the de-sexed world of gender politics, all personal relationships end up controlled and regulated by the state.
Martha Fineman, a gender legal theorist, touched on this in her 2004 book The Autonomy Myth. In it, she argues for the abolition of state-recognized marriage because it allows for family privacy, writing that “Once the institutional protection [is] removed, behavior would be judged by standards established to regulate interactions among all members of society” (emphasis added).
Gender ideology is an effective statist tool. Cultural Marxists use it to corrupt language and sow confusion, especially among children. It paves the way for the removal of the institutional protections for freedom of association and family privacy that stand in the way of “regulating interactions among all members of society.”

She then asks, “How do you get public opinion on board with an agenda that leads them to deny the reality of their own humanity?” Here is her disturbing answer:

There are lots of pieces to this puzzle, including the erosion of social trust, the breakdown of family, social polarization, and growing ignorance of history. But the groundwork has been laid over a long period of time.
First, virtually all outlets of communication had to be on board—Hollywood, academia, the media. Check. All medical personnel, particularly mental health personnel, had to be “educated” to comply with the transgender program or risk losing their licenses. Check. The educational establishment had to imbue schoolchildren with the ideology. Check. Large corporations had to get on board as stakeholders and enforcers. Check. And, of course, the push to legally de-sex society had to be embedded—Trojan Horse style—within a slightly less alien idea, with the slick slogan “marriage equality.” Check. Churches had to be brought on board so that even religion became a conduit for anti-truth. Check. Social, emotional, and economic pressures had to be established to censure anyone who dared to question the wisdom of it all. Check. Any such person had to be labeled a bigot, a hater, and a non-person. Checkmate.

Yes that is where all this is heading: not only the death of marriage, family, and male and female, but the death of freedom and democracy, and the rise of the All-Powerful State. I wonder if Huxley and Orwell knew last century that their feared dystopias would come about via the homosexual and transgender agendas.

Well it most certainly is happening that way.

7 Replies to “Statism and the De-Sexed Society”