Thousands of zealous God-deniers turned up in Washington DC on Saturday for the second ‘Reason Rally’ (the first one was held four years ago). The funny thing about this get-together is how so many folks get all worked up about a God they claim does not exist.

They insist on the non-existence of God yet seem to spend every waking minute railing against him and hating on him. Indeed, one could encapsulate the atheist faith quite simply with two core creedal beliefs:
1. There is no God.
2. And I hate him. 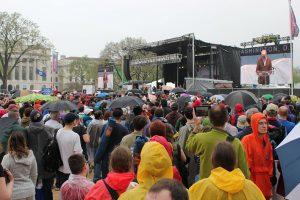 So they spent the rainy day ruminating and fulminating against God, promoting their hardcore anti-God worldview, and seeking to stir up the true believers. I think evangelist Ray Comfort was right when he quipped before the event that even the organisers of the rally were ‘praying’ that it would not rain on Saturday!

There were supposed to be 30,000 angry atheists turning out for this anti-faith festival, but like most claims made by the misotheists, reality was quite different from the rhetoric. But for those who did bother to roll up, it had all the hallmarks of any religious shindig or revival meeting.

That is because atheists are every bit as religious as anyone else. When you have a hole in your soul, you gotta fill it with something. When God is kicked out of your life that leaves a very large whole indeed, so it takes a lot to try to fill it. If nature abhors a vacuum this is certainly true in the spiritual realm as well.

So these folks spend their whole lives kicking and screaming against a being they insist does not exist. Yep, makes a lot of sense to me. If one regards such beliefs and behaviour as foolish in the extreme, they would be right. Twice in the Psalms we read that “the fool has said ‘there is no God’” (Psalm 14:1; 53:1).

In secular media reports on this atheist powwow, claims were made that polling shows a quarter of Americans are in this camp. Um, not quite. The “nones” as they sometimes refer to themselves means just what it sounds like – they are not a part of any of the religions found on the census forms.

But of course there are plenty of folks who do not go to church or adhere to a particular religion who are not atheists. One can have all sorts of spiritual and non-material beliefs and still be a “none”. So the claim that a quarter of Americans are atheists is as farfetched as the claim that there is no God.

And one of the really glaring bits of hypocrisy here is how this was also meant to be about ‘keeping religion out of public life’. As if. Secular humanism has been declared to be a religion by the U.S. Supreme Court and rightly so. These guys are quite happy to push their religious values onto everyone else in the public arena.

As one report on the Washington event stated, “The rally’s major political issues are climate change, reproductive rights and LGBT equality, all hotly contested political topics whose opposing voices often come from the religious right.”

So let me get this straight: the anti-God-botherers detest the fact that the so-called religious right wants to talk about values such as the right to life and the sanctity of marriage in the public square, but they want to have the right to do exactly the same thing on the exact same issues.

It is perfectly fine for the misotheists to push their values such as baby-killing and homosexuality in the public square, but those who take an opposing point of view are supposed to just sit down and shut up. I see. That is how atheist democracy works.

And it is interesting what core values they so forcefully cling to: a hatred of marriage and family, and a hatred of life. Scripture says that all who hate God love death (Proverbs 8:36). So abortion on demand is one of the central tenets of the atheist faith, along with biologically dead-end lifestyles like homosexuality.

These guys are evangelists for the culture of death. They have all the hallmarks of any religion: they have missionary zeal, they have their sacred texts, their revered prophets, their religious rites, and so on. There are even atheist church services which I have written about before: billmuehlenberg.com/2013/08/04/the-first-church-of-atheism/

They are working overtime on this, seeking to ban all public expressions of Christianity, and keep believers out of the public square. But they are allowed to fully push their beliefs and faith in public. Yep, fully reasonable. And this is billed as a rally about reason?

Other posters on display at the rally tell us more about what an odd bunch these guys really are. Consider this one: “The Ten Commandments are evil and un-American”. Ah, the voice of reason again being heard! So, telling people that murder and theft and lying are wrong is evil? Really. And un-American to boot?

So what are these guys suggesting: that all laws against murder, theft and lying be rescinded at once, because of their evil theistic underpinnings? Hmm, more terrific reasoning here. That is why these guys will never get very far. Their entire crusade is based on hatred for one they claim does not exist, so they will come up with any moronic and senseless position as a result.

So consumed are they in their hatred of God, that anything that comes from God becomes an object of hate as well. This explains their love of abortion, their hatred of marriage and family, their rejection of traditional morality, and their enmity to America and the West.

Franklin Graham was right to say this about the atheist revival meeting:

The atheists said this was definitely a political event, and they are holding it in an election year because, they “want to see reason taking precedence over religious-driven ideology.” This liberal godless kind of what they call “reason” should concern every freedom-loving American.
Isn’t it ironic that they met on the grounds of the Lincoln Memorial where these words are engraved in stone: “We here highly resolve that these dead shall not have died in vain–that this nation UNDER GOD shall have a new birth of freedom.” President Abraham Lincoln acknowledged the inherent role God plays in establishing our rights and freedoms and so did many of our founding fathers. Now these atheists promoting secularism want to strip God out of America’s past, present and future. Here’s a warning – If you remove God, you remove God’s hand of blessing. That’s been shown over and over throughout history.
What can we do? As Christians, we need to urgently share Jesus Christ with an ever-growing secular world. One day each of these people is going to stand before the God that they disown, and they will face an eternity in hell if they have not trusted Christ as their Savior. That’s where this kind of “reason” will get them. The Bible says, “There is a way that seems right to a man, but its end is the way of death” (Proverbs 14:12).

Yes we must keep praying that our atheist friends that they see the light, let go of their hatred of God, and realise that they are not the centre of the universe. All that means renouncing their pride and arrogance, and showing some humility before their Creator and Judge.

It is a hard ask, but there have been many who have made this journey. Hard core atheists like C. S. Lewis and Alister McGrath have done it recently. Plenty others could be mentioned here. Since the two I just mentioned were/are at Oxford University, let me mention a third Oxford student, Philip Vander Elst. His story can be found here: www.bethinking.org/is-christianity-true/from-atheism-to-christianity-a-personal-journey

The story of former atheist astrophysicist, Sarah Salviander can be found here: jamesbishopblog.wordpress.com/2015/05/23/former-atheist-astrophysicist-sarah-salviander-explains-her-journey-to-christianity/

If you prefer videos, here is one place to begin: www.youtube.com/playlist?list=PL-0zpu2toenabuNUBeBxQmmjr8JGuXVEs

I too was once a non-Christian. I too once scorned the Christian faith and thought I could make my way through life successfully all on my own. I was wrong, and I had a change of heart and mind. Just as countless individuals have found new life and a rational faith, so too can anyone who is really seeking.

So while the atheists keep on hating God and hating Christians, I will keep praying for them that they too come to the end of themselves, and come back to the God who made them, loves them, and seeks to bring them back home.

11 Replies to “Angry Atheists in Action”