We live in a culture that has long ago abandoned the idea of truth, logic, critical thinking and careful reflection. Instead, we have trained an entire generation on how to simply emote. Instead of thinking carefully about those things that matter, we emphasise feelings and subjective tastes.

Thus we have millions of people who now run their lives by the mischievous maxim, “If it feels good, do it.” We base our moral decision making on nothing more than how we happen to feel at a given time. Instead of basing moral evaluations on timeless truths, we simply go through life emoting – and if it feels good to us we go for it.

Fundamental categories of right and wrong, truth and falsehood, have thus all but disappeared, and we prefer to simply go through life based on how we happen to feel. That is a recipe for disaster, and we see it being played out every single day.

While we expect non-Christians to run their lives this way, the real tragedy is millions of Christians are doing exactly the same thing. They will determine what is best in the Christian life solely by how they feel. They will ignore what Scripture says and what 2000 years of Christian teaching says, and simply run with their emotions.

This in large measure is why the church is in such a mess today in the West. Fact and faith have largely been trumped by feelings. Because our own personal feelings have become the arbiter of morality and truth, we have rejected the true living God for a god of our own making.

We have made ourselves god in other words. How we feel and what we think become the sole means by which we navigate our way through life. We have dethroned the one true God and put ourselves on the throne. As I saw on a neat meme recently, “If your god lets you do whatever you want to do, then your god is really you!”

Yep, that’s about it. And it fits perfectly with what I found in my Bible reading this morning. Psalm 50:21 says this:

When you did these things and I kept silent,
you thought I was exactly like you.
But I now arraign you
and set my accusations before you.

Yes, we live our selfish, sinful lives and actually think this is how God is and that he would fully approve. We have put God in a box – one of our own making. We actually think he approves of and blesses all of our carnal feelings, desires and actions.

Thus we have heaps of so-called Christians who think God is fully happy with them being a ‘homosexual Christian”. That is because they have remade God in their own image. They want a God who simply nods in agreement with every lousy sinful thing they do.

Well I have news for these folks: God no more approves of or agrees with the notion of a ‘homosexual Christian’ than he does of an ‘adulterous Christian’ or a ‘fornicating Christian’. These are contradictions in terms. A biblical Christian is one who says no to known sin, and seeks God’s help to break harmful and sinful habits and activities. 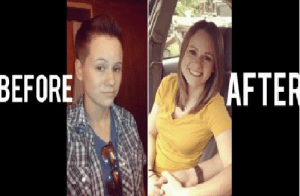 A true Christian certainly does not get God to rubber stamp their sin and bless their rebellion. Plenty of examples of this can be mentioned here. I just came upon one such story which is worth sharing here. Emily Satterfeld once lived a lesbian life, even thinking she was an OK Christian throughout. Here is her story:

Emily’s Testimony: I came across this today and had to do a double take. She doesn’t even look like me. Her eyes look hollow. She’s dressed in a way that downplays the woman God made her to be. The girl on the left had no hope in the world. She was lost and lived only for herself. You couldn’t have told her that though; she was getting high every day, sleeping around with various women, and living like there was no God, all while claiming to know Him. She was living ‘the life’ and she was a heartbeat away from the punishment due her for that life. The girl on the left was dead in her sins and trespasses. She couldn’t not sin because it’s all she knew and all her heart wanted. She could acknowledge there was a God and even claimed to read some of the Bible but she had no desire to obey it. Sin had her blinded to her need for forgiveness. Thanks be to God that He does not leave His bride in her sin. Praise Him for He opens our eyes and allows us to see the mire that we’re wallowing in when He saves us. Thanks be to God that He gives us His Spirit and causes us to walk in His statutes. I didn’t know I needed to be saved. I never foresaw that God would’ve given me the lot He prepared for me before the foundations of the world. Glory to God that it depends not on the will of man but on God when it comes to saving us. I would’ve never chosen Him had He not chosen me.

A video of her powerful story can be found here: www.wretchedradio.com/media/from-%E2%80%9Cchristian%E2%80%9D-to-lesbian-to-born-again-the-emily-satterfeld-story

This is a great testimony. Here was a person that called herself a Christian, thought she was doing OK, and thought that her lifestyle could even be squared with Scripture. Thankfully she was delivered from that deception and has now been radically set free in Christ.

Her story needs to be shared far and wide – not only so that non-Christians can learn about the life-changing power of the gospel, but so that clueless Christians can be woken from their demonic deception that they can just run with how they feel, and somehow think that God is OK with all that.

Yes real change is possible. That is why Christ came: to die for our sins and make it possible for us to get right with God. And that includes a totally transformed life. If your faith is one that has not changed you, it is not genuine Christian faith.