Contrary to the popular Beatles song, sometimes we need far more than just love. Having some brains would be a good place to start when dealing with complex and vital issues such as national security and foreign affairs. Yet some of the folks leading us in these areas seem to have ditched the brains bit altogether, and decided that pop songs will suffice.

Many Western leaders have gone this route when it comes to Islam and jihad. They seem to think if we just cuddle up to our enemies and be really nice to them, they will stop hating us and stop wanting to kill us. It is the old ‘take a Nazi to work day’ routine. 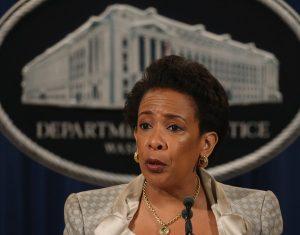 Yet this is the exact sort of madness coming from no less than the US Justice Department and Attorney General Loretta Lynch. The JD already came out with the ludicrous edited audio tape of the Orlando shooter, leaving all the bits about Islam and IS out!

Now AG Lynch has not only told us she has no idea where the jihadist’s wife is (and she is likely complicit in the Islamic massacre), but she came out with the num num comment of the year when it comes to dealing with terrorism. Speaking of the homosexual community Lynch said this:

“We stand with you to say that the good in this world far outweighs the evil, that our common humanity transcends our differences, and that our most effective response to terror and hatred is compassion, unity and love.”

Yep, now that’s gotta be a plan. Worth trying I suppose. This is all part of the Obama love affair with Islam and his hatred of America and the West. He is siding with our enemies and we are all paying the price for it. This is national suicide, and the jihadists are laughing all the way to paradise.

Thankfully many others were gobsmacked by this sheer nonsense. One commentator put it this way:

The Department of Justice, the first line of defense against terrorism committed on U.S. soil, is being run by a goofy, loony, totally clueless woman who is in denial of the most basic facts about terrorism. Her statement about love beating ISIS actually explains her redaction of all things Islamic from the 911 transcript. We have to show the terrorists we’re not mad at them, that we love them, and that we should all embrace as brothers and sisters.
In a normal administration in normal times. Loretta Lynch would have been fired for her unilateral redaction of the truth from the transcripts. But her statement about loving the terrorists should get her a nice, long stay in a lunatic asylum.

Or as another put it:

By reacting the way our Attorney General urges we do, we are in fact giving the savages what they want — because they count on using our own values against us – and we keep obliging. Islamic terrorists – regardless their affiliation – rely on one thing above all others in their quest to vanquish the West. It is more powerful than any bomb, or assault weapon. It is in exploiting Western values and ethos to their own advantage.
In being instructed to embrace “compassion” over vigilance and “love” over righteous anger, we make ourselves sheep to the slaughter. Because we will continue to refuse to do that which may not be politically correct, but is necessary for survival.
It is our very “tolerance” that enables suspicious communities and people like Omar Mateen to be dismissed as threats by law enforcement. It is our commitment to embrace inclusivity rather than self-preservation that will make way for Syrian refugees — all of whom cannot be properly vetted and some of whom will assuredly turn out to be ISIS infiltrators. It is our humanity that rejects war, even when war has been declared on us. In the end we prove there will be no retribution for slaughtering innocent Americans, thus emboldening our executioners more than they are already.
“We must not respond to intolerance with our own intolerance” is the repeated mantra of the left following any act of Islamic terror. Yet that is precisely what we must do. Those who embrace truly liberal values and count themselves among members of the civilized world must resolve not to tolerate the intolerable – and fear of being labeled “bigot” is not a good enough excuse to skirt this critical obligation.
Islamic terrorists do not wince when they hear Westerners proclaim compassion in the wake of barbarism. Rather, they rejoice each time their victims behave with predictable “tolerance” as it proves how easy it will be for them to win. That is the gift they want. And it’s the one those sworn to protect us keep giving them.

Yes with friends like this in high places, who needs enemies? It is time to admit the obvious: folks like Obama and Lynch are acting very much like they are our enemies. In my books that is called treason.

5 Replies to “All You need Is Brains”