I am not an inspired prophet so I cannot tell you what will happen next week or next year. But anyone with an eye on Scripture and an eye on the surrounding culture knows pretty clearly the direction things are moving in. When it comes to religious freedom, to Christian persecution, and anti-Christian bigotry, all three are hotting up big time in the West.

I have been documenting all this for years now. Of course I realise that most of my words – and those of others engaged in a watchman on the wall sort of ministry – are falling on deaf ears. But some are taking heed. Some are awake to what is happening.

And the watchman must keep speaking out and sounding the alarm, regardless of what sort of reception there is. Indeed, the blood will be on his hands if he does not blow the trumpet, as Ezekiel 3 and 33 make clear. So I will keep on warning people while I still can. 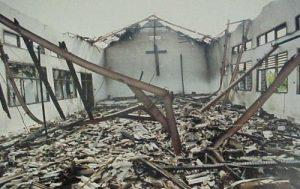 And one thing I will keep warning about is this: the church is in a precarious state in the West. Sure, we still have plenty of freedoms and plenty of opportunities. But how long this will be the case is a moot point. Christians suffering in other countries know all about how persecution works, and how radical discipleship must become the norm.

There can be no more easy believism, no more cheap grace, and no more carnal Christianity when the persecution comes in hot and heavy. Indeed, persecution separates the sheep from the goats – the men from the boys. Only those who are the real deal with Christ will stand during times of hardship and persecution.

Let me say right now, at the risk of getting some eschatology pugilists all bent out of shape, that I am not banking on being whisked away and never facing hardship and suffering. But that particular debate should not be had here – wait till I write some articles on it where I can carefully make that case. Those who want to have a big fight over this here will have to wait till then before their comments will be printed.

For those who are still with me (and have not dismissed me as a heretic and the antichrist!), let me offer some pre-persecution advice. The church as we know it will increasingly be under threat, and increasingly home churches and other types of fellowship will become the norm. So how do we act in such times, or prepare for such situations?

In the normal course of events the church is usually tended to by trained professionals: clergy, pastors, counsellors, and so on. But in times of growing affliction and persecution such leadership positions may be much more tenuous and undefined. Then every believer will have to lift his game and pull his own weight.

Those who may think of themselves as spiritual nobodies may well be thrust into various leadership positions. All believers will need to take their faith seriously, and we all will have to stop playing games and get real as to what it means to be a hated and despised follower of Christ.

Let me look at a few things we can now be doing. As to Scripture, we know that in hard-core anti-Christian countries Bibles are banned. There may come a day in the West where a complete ban happens as well. But in the meantime we are already seeing many places declaring the Bible to be a book full of hate speech, and treated accordingly.

As things hot up, we must now be preparing for any such worst possible outcomes. Thus memorising Scripture is something we should be doing now. And simply reading it on a daily basis would be a good start for many believers. We take for granted having Bibles freely available now, but one day we will wish we had not.

As to preaching, more and more of us will be moving into this role in difficult days ahead. Preaching and teaching may well be offices and giftings which some especially exercise today, but a day may be coming where we will all need to be able to teach one another and proclaim carefully the Word of God. So we should be immersing ourselves in Scripture and good theology now while we still have the chance.

As to counselling and discipleship, again, some have this as a specialised ministry now. Many pastors and counsellors have training in this area, and rightly so. But a time may come when we all must be counsellors. We all should be, as the title of the old Jay Adams book put it, ‘competent to counsel’.

Even though I have no formal training in pastoral work or counselling, I find that increasingly I am doing it nonetheless, especially online. I am regularly offering counsel and help to others. Many come to me asking for advice, for prayer, for counsel, and so on.

I cannot just pass them off to others – although specialised needs may well require specialised counsel. But as things continue to hot up, we all must be prepared to counsel and disciple others. And a simple definition of discipleship is one person who knows a bit more than another sharing his knowledge and wisdom with that other person.

Other issues of course arise here. Right now all sort of churches, Christian ministries, and parachurch groups receive government funding of one form or another. Maybe it is having just tax-exempt status. But as governments in the West become increasingly secular and hostile to all things Christian, it may be time now to wean ourselves off the government teat.

We need to learn to really trust God, not the state, for where our funding comes from. The sooner we do this, the better prepared we will be for those times coming where we will be forced to provide for ourselves without any government help.

Let me close with some very wise words by someone who knows all about surviving in a hostile, anti-Christian environment. Corrie ten Boom made it through the murderous Nazi regime, and is well placed to offer us some guidance here. After the war she went to minister in Asia and learned much there. What she said must be taken carefully to heart by all of us, including all church leaders and pastors:

I have been in countries where the saints are already suffering terrible persecution. In China, the Christians were told, “Don’t worry, before the tribulation comes you will be translated – raptured.” Then came a terrible persecution. Millions of Christians were tortured to death. Later I heard a Bishop from China say, sadly: “We have failed. We should have made the people strong for persecution, rather than telling them Jesus would come first. Tell the people how to be strong in times of persecution, how to stand when the tribulation comes – to stand and not faint.”

Again, those who want to now hate on me because I may have a differing point of view on their pet end times theories are invited to take their zeal to rebut me elsewhere thanks. There is room to move on how we understand last days’ scenarios, and those who want to go to the wall over their fav eschatology beliefs, or want to attack me for daring to differ, are invited to not comment here until I write more fully and directly on these issues thanks.

But for the others who still have an ear to hear, I believe we are already clearly seeing increased persecution all over the West. And from my vantage point it will continue to get worse. Thus we should be doing all that is necessary now so that as things continue to go downhill, we will be able to stand and faithfully represent our Lord Jesus Christ.

30 Replies to “When They Start Shutting Down the Churches”