Every new day is marked by the rising of the sun, and regrettably, we are getting another daily certainty and reality: every new day sees yet another Islamic terror attack. While they of course occur each and every day all around the world, increasingly they are becoming a daily event in the West.

Anyone can do the math here: since 9/11 there have been 28,895 Islamic terror attacks. In the full 15 years since that dark day there will be 5475 days. Thus we are getting over 5 jihad attacks on average each day somewhere in the world. That is a lot of attacks, and that is a lot of dead people.

If we just look at France over the past few years we see just how greatly these attacks are being stepped up. A graphic visual of this can be found in this article which documents just the past five years in France in which 16 major jihadi attacks are detailed: www.bbc.com/news/world-europe-33288542 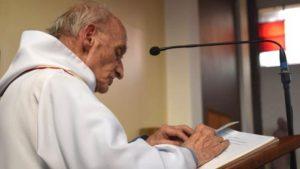 The most recent (at least as of the time of this writing!) was the blatant attack in northern France:

26 July, Saint-Etienne-du-Rouvray: A priest was killed in an attack by two armed men on a church in a suburb of Rouen in northern France. The attackers entered the church in Saint-Etienne-du-Rouvray during Mass, taking the priest, Fr Jacques Hamel, 84, and four other people hostage, before being shot dead by police. President Hollande said the men claimed to be from IS.

Plenty has been written about all this increased jihad activity in the West. If we focus on France only (and not Belgium and Germany and England and America, etc., as well), a number of commentaries have been penned, two of which struck my attention.

It is now 18 months since two gunmen forced their way into the offices of Charlie Hebdo in Paris and set about murdering the staff of that magazine. The gunmen from al-Qaeda in Yemen called for the editor – “Charb” – by name before murdering him and most of his colleagues. In an interview shortly before his death, taking into account the threat to his life which entailed constant security protection, Stéphane Charbonnier had said, “I prefer to die standing than live on my knees.” Charb did die standing, in the office of the magazine he edited.
In the 18 months since the attack on Charlie Hebdo and the massive demonstrations in solidarity on the streets of Paris, France has suffered a terrible set of further terrorist assaults. The ISIS attack (which killed 130 people) last November on the Bataclan Theatre and other sites around Paris and the attack (which killed 84 people) in Nice on July 14 are the deadliest and most prominent. But other acts of terror – including the murder last month in their home of two members of the police, carried out by a man pledging allegiance to ISIS – have gone on and almost become normal.

What “provocation” had Father Hamel provided? If any good can come from an act of such savagery, it would be in the possibility of healing such a rift. Obviously the Pope has condemned the killing of a priest of his own church. But many other anti-clerical figures in France may well pause before the enormity of what the jihadists have once again done. You do not have to be religious to experience revulsion at such an act being done to a man of God in the act of celebrating the Eucharist. The usual debates in French life over the role of the church and its role in the state may be able at least to pause during this period, raising the possibility of a more suitable and lengthy pause in hostilities.
In these two attacks, eighteen months apart – on a magazine office in Paris and a church in Rouen – the nature of the enemy we all face stands clearly before us. An enemy willing to slaughter the most rollicking secularists and the most devout priest, both in their places of work, is an enemy with the entirety of French civilisation and culture in its sights. It is an enemy – extremist Islam – clearly intent not on some kind of tributary offering or suit for peace, but rather an enemy which seeks its opponent’s total and utter destruction. Should this not be the moment for the entirety of one of the greatest cultures on earth to unite as one, turn on this common enemy and destroy it first, in the name of civilisation?

Murray hints at the longstanding debate on church and state, one that cannot be resolved here. And of course much more important is the issue of mosque and state – the two are one and the same in Islam. But the West’s division of the two spheres of authority was fully based on Christian principles, as I have discussed elsewhere: billmuehlenberg.com/2012/03/03/islam-tolerance-and-religious-freedom/

Of course the West has gone a long way from the early days where the Judeo-Christian worldview helped to create Western civilisation, to a place where Christianity is now anathema. Today we want public society to be totally bereft of all religious influence.

That of course cannot work, and simply creates a religious vacuum. Secular humanism cannot fill that vacuum in any satisfactory way, while Islam is seeking to do it instead. But that does not save society of course, it enslaves it with everyone forced to submit to sharia law and the loss of freedom.

Seeking to make the West more secular is thus not the answer. Maybe returning to its roots is the real answer. An interesting piece has just appeared by a Paris correspondent for the BBC. He too writes about what is happening in France, and as far as I can tell, he does so from a secular perspective. He starts his piece this way:

The murder of Father Jacques Hamel has triggered a bout of reflection among the French on a subject they normally avoid: their relationship with Catholicism and Christian ethics. Like most European countries, France is in a post-religious phase of its history. Few attend church, and politicians who speak of “Judaeo-Christian” values are often dismissed as right-wing throwbacks.
And yet what the reaction to the jihadi murder campaign of the last 18 months shows is that people are far more influenced by their cultural and religious inheritance than they care to realise. Since the killings began, there have been no crowds on the streets of Nice or Paris chanting “Death to Islamic State”. Instead of flaming torches carried in angry procession, there are candles of remembrance.

And his closing paragraphs are also quite interesting, especially if he is in fact a secularist. He writes:

And yes, it does call for tough measures like the expulsion of foreign offenders and stringent limits on immigration. But there has been no visible far-right backlash. No arm-banded march-pasts in the banlieues. The Front National gives voice to an angry and often inarticulate part of the French population, but it has not gone down the way of violence.
Of course this might change – and the great fear today is that fringe elements on the nationalist far-right decide to take the law into their own hands. That way lies civil conflict and nightmare. But so far one is bound to observe that the country has reacted to this horrific succession of provocations with good sense and an eye on the higher values.
Most French people will argue that these values – tolerance, respect between peoples, forgiveness, eschewal of violence – are part of the country’s enlightened secular tradition. But of course before that they were something else. They were Christian.

Yes quite so. Everything that stands against the bloody values of political Islam is found in the Christian religion. And the ironic thing is, Europe and the West in general, and France in particular, have been working overtime the past century or two to get rid of all Christian influence.

Indeed, France sought to do this in its own bloody fashion back in 1789 with the French Revolution. Now that the secularist experiment is proving to be an abysmal failure, and Islam is rushing in to fill the gap in the West, and proving to also be an even worse failure, now we have not many options left to us.

The anti-Christian mindset of the West can continue, and then we can simply write off the West as a result. Or perhaps we can return to our roots, return to what made possible Western civilisation in the first place, and see if we can turn things around, before it is too late. The choice is ours as Westerners to make.