We have all been there. We have been mistreated and abused and maligned and attacked and kicked off a cliff. It hurts, and it is no fun. And if you are a believer, you perhaps expect it from non-believers who may not always want to treat you with dignity and respect.

But such treatment from fellow Christians is what can really hurt. It really takes its toll when believers treat you like dirt, say all manner of evil about you, lie about you, and so on. It can be devastating. And I know this is a very widespread experience unfortunately in part because of something I recently posted.

On a social media site I put up a brief comment, and I was a little surprised at what a quick and strong response it generated. Quite a few people responded, liked, shared and commented on it. So it seems to have really struck a nerve in many believers. What I wrote was this: 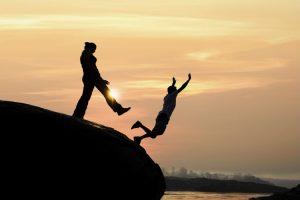 The truth is, my intention of that post was to emphasise the second half of each sentence. That was my main reason for posting it. It was as much to encourage myself as others. It was meant to help me to keep going, despite the relentless attacks, betrayals, smears and vilification.

Yet many people were empathising with the first half of each sentence. It seems plenty of folks have known all about being back-stabbed, betrayed, lied about, let down, and so on. And it is so sad that this is the case. Jesus said the main way the world would know that he was sent by the Father was the unity and love Christians have for one another (John 17:20-23).

But that love is so very often lacking. Thus our testimony to a watching world is far from what it should be. I will be the first to admit I often fail in this area as well. But we would like to think that Christians would treat one another a bit better than the world does.

And the pain, as I said, is very real. Some of these things are like a kick in the gut. You feel utterly devastated. You feel so let down, so betrayed, so misused and abused, that you really think about giving up. You wonder if it is all worthwhile.

You may understand when non-believers give you are hard time, falsely accuse you of things, twist your words, impugn your motives, and attack your character – but when fellow Christians do it? That just becomes so unbearable at times.

So I can understand how some believers just drop out – either from saying anything in public, or worse yet, from the faith itself. Some just give up on the Lord because of the way the Lord’s people have treated them. Yes I get that. I can be tempted to do the same.

So if Christ will not give up on us, then we should not give up on him. We need to differentiate between Christ and his people. The former is always faithful, loyal and committed to us, but the latter sadly may not always be. Sure, believers should be faithfully imaging their Lord, but they often fail in this.

So this is both a challenge and a warning. We Christians need to get a lot better at being the sort of people we are meant to be as his sons and daughters. But we also cannot count on other believers to be for us what only Christ can. Christians will let you down. The church will let you down. Christ will not.

That is why our ultimate faith and trust must be in Christ alone, not in his fallen and fallible followers. So if the church has really hurt you or let you down, or other believers have done a good job of maligning the gospel right before your very eyes, look instead to Christ.

Believers will disappoint, Christ will not. As has been said, if you leave the faith because of what the church has done to you, you may have had your faith in the wrong place. He alone must be the one we pin our hopes on and the one we look to for all things.

And let me say that there can well be a place for letting go of some of the folks who have hurt you, abused you, or been disloyal to you. While we seek to keep bridges built with others, and pray and work for reconciliation when and where we can, this is not always possible.

Sometimes you have to cut people loose, whether by unfriending them on social media, or by severing a relationship. It is never pleasant, and will cause sadness and grief. I don’t like it when it happens, but sometimes it has been my only choice. None of us need to be treated like a punching bag, or someone’s dirty dish towel.

But the main point here is to run to Christ during such painful times. We must stay true to Christ, even if it seems everyone we know is turning against us or treating us so very poorly. The pain will eventually heal, and the bad memories will eventually fade.

So hang in there and persevere. Soon enough we will have our eternal reward. So don’t give up. Let me offer a few quotes by some great Puritan writers in conclusion:

“Your life is short, your duties many, your assistance great, and your reward sure; therefore faint not, hold on and hold up, in ways of well-doing, and heaven shall make amends for all.” Thomas Brooks

“When we are foiled, let us believe we shall overcome; when we have fallen, let us believe we shall rise again. Jacob, after he received a blow which made him lame, yet would not give over wrestling (Gen. 32:25) till he had obtained the blessing. So let us never give up, but, in our thoughts knit the beginning, progress and end together, and then we shall see ourselves in heaven out of the reach of all enemies.” Richard Sibbes