Allow me to engage in rather broad-brush strokes here as I look at current events through the eyes of history, especially church history. I have written often about the values of Western civilisation in general, and the appalling election choices Americans now have in particular.

Western civilisation (primarily Christian civilisation) has contributed so much to the world, that it deserves praise, even when we witness its collapse right around us. Freedom, democracy, the rule of law, and so on are all tremendous social goods in large part brought about because of the Judeo-Christian worldview.

But we see all this unravelling as we speak, with the two miserable presidential candidates in the US as much of a symptom of this as a contributing factor. Thus I, and millions of concerned believers and principled conservatives, are grieving heavily right now.

As I have written so often, I can only see the decline and fall of the US and the West as part of God’s just judgment. Our time in the limelight may well be over. We may well be entering into a new dark ages. Should the Lord tarry, we may be witnessing the collapse of the West, and the rise of heaven knows what – but it is looking very grim right now. 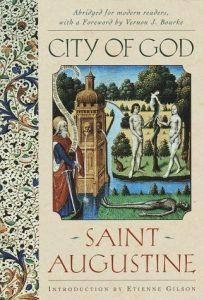 But such things are not unique. The student of history is not surprised by novelty, but chagrined by repetition: failing to learn from history, we repeat its mistakes. We have been there and done that in other words. Civilisations have come and gone in the past, and will continue to do so.

As an American who loves my country deeply and appreciates its Christian beginnings, it is heartbreaking to see it collapsing. I want it to continue, to be great, to be a world leader. But as has been said, “America is great because she is good, and if America ever ceases to be good, she will cease to be great” (attributed to de Tocqueville, but author unknown).

Many readers would realise that I refer to the classic work by Augustine, De Civitate Dei (426), in my title. The City of God was written by the North African Bishop in response to the fall of Rome. But a bit of background is in order. After three centuries of intermittent persecution, the Christian church found rest under Constantine and his successors.

In 312 he became the sole ruler of Rome and eventually the Roman Empire, and ended the persecution, gradually granting Christians preferential status. Claiming to be a Christian, he extended favours to Christianity, including the Edict of Milan of 313, granting tolerance for the faith.

It had stood strong for nearly a millennia. Many believed it was invincible. Thus when Aleric, king of Visigoths, sacked Rome in 410, this sent shockwaves throughout the world. Augustine had lived in Italy for four years, where he was converted under Bishop Ambrose.

He returned to North Africa in 387. When refugees from Rome came to Carthage speaking about the sack of Rome, he soon set about to discuss this in the light of God’s eternal purposes. He asked why Rome had fallen, and wondered if Christianity would fall as well.

Thus he spoke of the City of Man which was fallen and temporary, and the City of God which is the perfect eternal kingdom. As church historian Bruce Shelley wrote, “It gave a spiritual interpretation to the woes the world was suffering. The present might be bad, but better things are to come. The golden age – the Kingdom of God – is in the future, not in the fading splendours of a worldly kingdom that could only crumble and fall.”

Part of the answer to those grieving over fallen earthly cities is to realise, with Abraham, that we ‘look forward to the city with foundations, whose architect and builder is God’ (Hebrews 11:10). Here we have no abiding city. Here we have no secure home.

Everything that can be shaken will be shaken. Individuals will be shaken and nations will be shaken – even entire civilisations. People and empires will disappoint. They will come and go. Thus our faith must not rest in any earthly city but only in the heavenly city.

I just read a set of lectures delivered by Malcolm Muggeridge to a university audience in Canada in 1978. They became a brief booklet entitled The End of Christendom (Eerdmans, 1980). In it he distinguishes between Christianity and Christendom, the “administrative or power structure, based on the Christian religion and constructed by men.”

Christendom has played a tremendous role in the art and literature, in the mores and jurisprudence, in the architecture, values, institutions, and whole way of life of Western man during the centuries of his dominance in the world. But now as Western man’s power and influence recede, so Christendom itself comes to have an evermore ghostly air about it….
I conclude that civilizations, like every other human creation, wax and wane. By the nature of the case there can never be a lasting civilization any more than there can be a lasting spring or lasting happiness in an individual life or a lasting stability in a society. It’s in the nature of man and of all that he constructs to perish, and it must ever be so. The world is full of the debris of past civilizations and others are known to have existed which have not left any debris behind them but have just disappeared….
In these circumstances why should anyone expect Christendom to go on forever or see in its impending collapse a cosmic catastrophe? Our earth and its inhabitants have survived numerous disasters from the Ice Age onwards….
If, then, all the signs point to the decline and impending fall of what we continue to call Western Civilization, to be followed by another Dark Age, this no more represents any finality in human history than other such developments have in the past.
I think of St. Augustine when in A. D. 410 the news was brought to him in Carthage that Rome had been sacked. It was a sore blow, but as he explained to his flock: “All earthly cities are vulnerable. Men build them and men destroy them. At the same time there is the City of God which men did not build and cannot destroy and which is everlasting.”

Because of all its greatness in so many areas, plenty of people have looked on America as another eternal city, one that seems invincible. But now we see everywhere signs of its imminent collapse. A moral and spiritual crisis has resulted in the current political, social and cultural crisis.

Quite so. I have long championed the goods and the successes of the West. But it too will not last forever. I am not a moral nor a cultural relativist, so I certainly think that some cultures are better than others. The free West is better than any slave culture, be it Communist or Muslim.

But as the West rejects its own heritage and repudiates its spiritual foundation, its days are numbered. Nothing but heartfelt revival and repentance can turn things around. Whether that happens or not depends in large measure on God’s people.

It is a grievous tragedy to witness the death of a culture, just as it was back in 410. As Francis Schaeffer once put it, “Do not take this lightly! It is a horrible thing for a man like myself to look back and see my country and my culture go down the drain in my own lifetime.”

But for the Christian, we have something far greater that we cling to, something much better to hope in, and something far grander to look forward to. As Muggeridge rightly stated: “Let us rejoice that we see around us on every hand the decay of institutions and instruments of power…For it is precisely when every earthly hope has been explored and found wanting…that Christ’s hand reaches out sure and firm”.