If media coverage is anything to go by, most people in the West know a whole lot more about the Kardashian clan than they do about the divine family: Father, Son, and Holy Spirit. We would expect this to be true of non-believers, but why do I suspect that this may well be true of countless Christians as well?

Millions of Westerners can tell you everything you need to know about Kim, Khloe, Kourtney and the others. (No I am not an authority on this bunch – I had to do a quick google to get some of these other names!) They follow their every move, and are religiously following their exploits in the media and elsewhere. 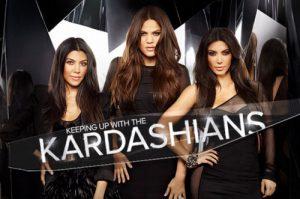 And media coverage is certainly there in abundance. One online newspaper I was browsing through concerning a different topic featured at least nine or ten pieces on the various Kardashians and their latest escapades, fashion statements, and the like.

I would wager that far more believers might score better on a Kardashian quiz than on a biblical doctrine quiz. And they would be far more personally connected to their TV stars than with the one who created the stars – and everything else.

I say all this in part because of my morning reading. I again read about the ministry of reconciliation which Paul discusses in 2 Corinthians 5:11-21. Here are verses 17-21 of this important section of Scripture:

Therefore, if anyone is in Christ, the new creation has come: The old has gone, the new is here! All this is from God, who reconciled us to himself through Christ and gave us the ministry of reconciliation: that God was reconciling the world to himself in Christ, not counting people’s sins against them. And he has committed to us the message of reconciliation. We are therefore Christ’s ambassadors, as though God were making his appeal through us. We implore you on Christ’s behalf: Be reconciled to God. God made him who had no sin to be sin for us, so that in him we might become the righteousness of God.

Notice especially what Paul calls us in verse 20: we are Christ’s ambassadors. An ambassador of course is someone who represents someone else. One dictionary defines an ambassador as “an important official who works in a foreign country representing his or her own country there, and who is officially accepted in this position by that country.”

Christians are official representatives of God on earth. We may not always be officially accepted as such, but we are meant to be his ambassadors nonetheless. Indeed, as Mark Seifrid comments, “That Paul is sent in ambassadorial service implies that a state of enmity and conflict otherwise exists between God — or indeed Christ — and the world.”

Or as David Garland states:

Paul identifies himself as an ambassador of Christ. Our modern perception of an ambassador as an official of the highest rank chosen and certified by a government to represent it before another helps us appreciate the magnitude of Paul’s claim. He is Christ’s spokesman. He does not act on his own authority but under the commission of a greater power and authority who sent him. Paul therefore understands himself to be divinely authorized to announce to the world God’s terms for peace.

Of course a primary trait of a useful ambassador is that he knows all about the king or country that he is representing. No one would send to another land an ambassador who knows little or nothing about the nation or the ruler he is meant to be representing.

Yet how do Christ’s ambassadors in the West stack up in this regard? I think many would agree with me that in most Western churches basic knowledge of God and his ways is at an all-time low. We so often have only a superficial knowledge of the one we are meant to bear witness to.

And usually we don’t even have a minimal theological understanding, awareness of Christian doctrine, and understanding of core Bible truths. We know little about the God we claim to represent, and the truths of His Word, yet we don’t seem to mind this in the least.

Sadly a major priority for so many Western Christians is to keep up with the Kardashians and all sorts of other worldly pursuits. We know the world and its values very well indeed, but have only the slightest grasp of who God is and what his values are.

This is not how things should be. A common motto used by Christian organisations and churches is “Knowing Christ and making him known.” We cannot properly make him known until we first know him very well. Do we spend the required time and effort to really know the one we claim to serve?

Is daily prayer and Bible study a routine part of our Christian life? Or are these instead just optional extras, fitted into a busy schedule – a schedule that usually involves hours of daily television viewing and entertainment? What we do with our time tells us a lot about the sort of person we are – and the sort of Christian we are.

Once again, the words of A. W. Tozer serve as a fitting conclusion to my piece:

“If God is the Supreme Good then our highest blessedness on earth must lie in knowing Him as perfectly as possible.”

“The decline of the knowledge of the holy has brought on our troubles. A rediscovery of the majesty of God will go a long way toward curing them. It is impossible to keep our moral practices sound and our inward attitudes right while our idea of God is erroneous or inadequate. If we would bring back spiritual power to our lives, we must begin to think of God more nearly as He is.”

“Progress in the Christian life is exactly equal to the growing knowledge we gain of the Triune God in personal experience. And such experience requires a whole life devoted to it and plenty of time spent at the holy task of cultivating God. God can be known satisfactorily only as we devote time to Him.”

3 Replies to “Keeping Up With the Godhead”