We should all be trembling, and if we are not, we should be asking “Why not?” But trembling at what? And why? Let me tell you: trembling before the God who is there – the God who made us and who we are all called to give an account to. And I refer to the one true and living God, not an idol made in our own image.

Instead, “our God is a consuming fire” (Hebrews 12:29). Because of this, “it is a dreadful thing to fall into the hands of the living God” (Hebrews 10:31). There are of course plenty of passages found in both Testaments describing the God with whom we have to do, and he is nothing like the one envisaged by so many today. 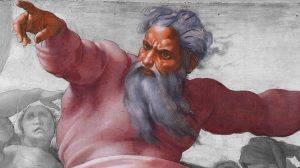 Far too many believers have simply stopped reading their Bibles and instead have drunk deep from the foolish nostrums of our age. Thus they have a defective view of God, a lousy view of humanity, and a dopey idea of what life is all about.

They have bought all the foolishness about tolerance, offending nobody, victimhood, and safe spaces. They think we should really only worry about one thing; never upsetting anyone or hurting anyone’s feelings. I get this foolishness from Christians all the time sadly.

For example, one person recently said something really quite odd on a social media site: “If you do a thematic study of distress and safety in the bible, you will find that the God is deeply concerned with any feelings of distress or unsafety that are related to judgement or fear of judgement.”

Oh really? So hundreds of passages, including the two from Hebrews I cite above, do not belong in the Bible? Presumably so much of what Jesus said should not be there either. After all, he talked more about hell and judgment to come than anyone else.

He sure was not worried about hurting people’s feelings or intent on keeping the masses happy. He spoke tough words and made tough demands on all those who might follow him. Simply consider how he approached the rich young ruler. Jesus laid it on the line for this guy, and did not worry if he felt distressed or upset.

He made really rough demands on him, and did not seek to make him feel comfortable about himself. Indeed, we read that when “the young man heard this, he went away sad, because he had great wealth” (Matthew 19:22). I wrote this up further here: billmuehlenberg.com/2010/05/25/discipleship-making-things-difficult/

No, God is not all that concerned if we feel offended or upset or distressed. No, he does not want to set up little “safe spaces” for us to feel comfortable in. No, he does not sugar-coat the gospel message so that no one is offended or feels bad. No, he does not offer “trigger warnings” first before he speaks. No, he is not into letting us off the hook by making us feel good.

He wants us to repent of our sin and turn from our repugnant rebellion or face his just judgment. And he wants us to approach him on his terms, not ours. Getting back to the opening lines of this piece, the God we serve is a God that we should tremble at.

He is that sort of God. I recently went through the Bible and recorded the many times this one word is used: “tremble”. It is found quite often, so let me just offer some instances of it here. They make it clear what sort of God exists, and what he expects as he calls us into relationship with himself.

Exodus 19:16-18 On the morning of the third day there was thunder and lightning, with a thick cloud over the mountain, and a very loud trumpet blast. Everyone in the camp trembled. Then Moses led the people out of the camp to meet with God, and they stood at the foot of the mountain. Mount Sinai was covered with smoke, because the Lord descended on it in fire. The smoke billowed up from it like smoke from a furnace, and the whole mountain trembled violently.

Exodus 20:18-19 When the people saw the thunder and lightning and heard the trumpet and saw the mountain in smoke, they trembled with fear. They stayed at a distance and said to Moses, “Speak to us yourself and we will listen. But do not have God speak to us or we will die.”

Deuteronomy 2:25 This very day I will begin to put the terror and fear of you on all the nations under heaven. They will hear reports of you and will tremble and be in anguish because of you.”

2 Samuel 22:7-16 In my distress I called to the Lord;
I called out to my God.
From his temple he heard my voice;
my cry came to his ears.
The earth trembled and quaked,
the foundations of the heavens shook;
they trembled because he was angry.
Smoke rose from his nostrils;
consuming fire came from his mouth,
burning coals blazed out of it.
He parted the heavens and came down;
dark clouds were under his feet.
He mounted the cherubim and flew;
he soared on the wings of the wind.
He made darkness his canopy around him—
the dark rain clouds of the sky.
Out of the brightness of his presence
bolts of lightning blazed forth.
The Lord thundered from heaven;
the voice of the Most High resounded.
He shot his arrows and scattered the enemy,
with great bolts of lightning he routed them.
The valleys of the sea were exposed
and the foundations of the earth laid bare
at the rebuke of the Lord,
at the blast of breath from his nostrils.

Psalm 99:1 The Lord reigns, let the nations tremble; he sits enthroned between the cherubim, let the earth shake.

Proverbs 28:14 Blessed is the one who always trembles before God, but whoever hardens their heart falls into trouble.

Acts 7:32 ‘I am the God of your fathers, the God of Abraham, Isaac and Jacob.’ Moses trembled with fear and did not dare to look.

Romans 11:20 But they were broken off because of unbelief, and you stand by faith. Do not be arrogant, but tremble.

Ezra 9:4 Then everyone who trembled at the words of the God of Israel gathered around me because of this unfaithfulness of the exiles. And I sat there appalled until the evening sacrifice.

Psalm 119:161 Rulers persecute me without cause, but my heart trembles at your word.

Isaiah 66:2 “Has not my hand made all these things, and so they came into being?” declares the Lord. “These are the ones I look on with favor: those who are humble and contrite in spirit, and who tremble at my word.”

Isaiah 66:5 Hear the word of the Lord, you who tremble at his word.

This is the God that we have to deal with, not one of our own invention. Our God is not one to be trifled with. It is serious business to deal with the Lord of Lords and King of Kings. Yes, because of the finished work of Christ at Calvary, sinners like you and I can find a way to approach Father God confidently and wholeheartedly.

But Christ is no cute and cuddly teddy bear. Simply read what John says about him in Revelation 19:11-16:

I saw heaven standing open and there before me was a white horse, whose rider is called Faithful and True. With justice he judges and makes war. His eyes are like blazing fire, and on his head are many crowns. He has a name written on him that no one knows but he himself. He is dressed in a robe dipped in blood, and his name is the Word of God. The armies of heaven were following him, riding on white horses and dressed in fine linen, white and clean. Out of his mouth comes a sharp sword with which to strike down the nations. “He will rule them with an iron scepter.” He treads the winepress of the fury of the wrath of God Almighty. On his robe and on his thigh he has this name written: KING OF KINGS AND LORD OF LORDS.

As A. W. Tozer rightly said:

Christ can never be known without a sense of awe and fear accompanying the knowledge. He is the fairest among ten thousand, but He is also the Lord high and mighty. He is the friend of sinners, but He is also the terror of devils. He is meek and lowly in heart, but He is also Lord and Christ who will surely come to be the judge of all men. No one who knows Him intimately can ever be flippant in His presence.

7 Replies to “Are You Trembling Yet?”