Back in 1995 a song called “One of Us” became a big hit throughout much of the West. Performed by Joan Osborne, it asked this question: “What if God was one of us?” The first verse of the song runs as follows:

If God had a name what would it be?
And would you call it to his face?
If you were faced with Him in all His glory
What would you ask if you had just one question?

I must confess that I know nothing about her, nor the guy who wrote the song. Whether either one is a Christian is something someone else might be able to enlighten me on. But they were asking the right questions at least. In fact, there are few other questions as important as these. 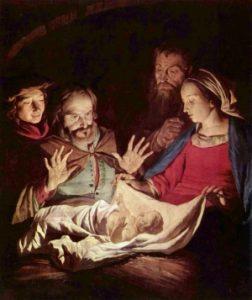 There are two ways to address all this. On a popular and very well-known level there is Christmas of course. It is all about God becoming one of us. The birth of Jesus is part of the amazing story of God with us. While many in the West no longer see the connection between Christ and Christmas, it is certainly there.

Indeed, there would be no Christmas if there was no Christ. Yet so much of the West is intent on separating the two. As US President Ronald Reagan once remarked: “Christmas can be celebrated in the school room with pine trees, tinsel and reindeers, but there must be no mention of the man whose birthday is being celebrated. One wonders how a teacher would answer if a student asked why it was called Christmas.”

The second way to address this is to look at it theologically. Christmas is really about the Incarnation. That is simply a Latin word meaning ‘in flesh’. God became flesh in the form of his son. This is how John’s gospel puts it (1:1-2, 14):

God came in the flesh. He became one of us. So we no longer have to ask, “What if God was one of us?” We already know that he did. And he does have a name: Jesus Christ. And it is a good question indeed as to what you might ask him if you met him face to face.

But God has already taken the initiative in Christ, revealing who the Father is, and dealing with all the chief questions we can ever ask:
Who are we?
Where did we come from?
Why are we here?
Why are we in such a mess?
How can we get out of this mess?
Where are we going?

All that and more is answered by the Incarnation. The birth, life, death and resurrection of Jesus Christ tells us what we need to know. But more than simply answering nagging questions, Christ came so that we might be set free from our sin, escape the penalty of death which our sins have brought upon us, and restore us to a right relationship with the Father.

There have been many great moments in history, such as the building of the Great Wall of China, the invention of the printing press, the painting of the Sistine Chapel, or the first man to walk on the moon. But the greatest event in history bar none was the Incarnation. Nothing compares to this. It is why 2000 years later we still celebrate that day a baby was born into very humble circumstances. It is the turning point of all of human history.

Let me finish by offering some stirring and beautiful quotes by various Christians throughout the ages about this wondrous event. May their words stir your hearts and spirits, and cause you to remember and appreciate the true meaning of Christmas.

So what if God was one of us? Here are some replies:

“He so loved us that for our sake He was made man in time, through Whom all times were made; was in the world less in years than His servants, though older than the world itself in His eternity; was made man, Who made man; was created of a mother, whom He created; was carried by hands which He formed; nursed at the breasts which He had filled; cried in the manger in wordless infancy, He the Word without Whom all human eloquence is mute.” Augustine

“Maker of the sun, He is made under the sun. In the Father He remains, from His mother He goes forth. Creator of heaven and earth, He was born on earth under heaven. Unspeakably wise, He is wisely speechless. Filling the world, He lies in a manger. Ruler of the stars, He nurses at His mother’s bosom. He is both great in the nature of God, and small in the form of a servant.” Augustine

“He lies in a manger, but contains the world. He feeds at the breast, but also feeds the angels. He is wrapped in swaddling clothes, but vests us with immortality. He found no place in the inn, but makes for Himself a temple in the hearts of believers. In order that weakness might become strong, strength became weak.” Augustine

“The gaping chasm between God and human beings – which human reason has perceived and before which it has trembled – has been bridged by this infant’s merest yawn.” Athanasius

Martin Luther wrote for his children at Christmas: “What the globe could not enwrap / Nestled lies in Mary’s lap. / Just a baby, very wee, / Yet Lord of all the world is he.”

“The greatest and most momentous fact which the history of the world records is the fact of Christ’s birth.” Charles Spurgeon

“Infinite, and an infant. Eternal, and yet born of a woman. Almighty, and yet hanging on a woman’s breast. Supporting a universe, and yet needing to be carried in a mother’s arms. King of angels, and yet the reputed son of Joseph. Heir of all things, and yet the carpenter’s despised son. Oh, the wonder of Christmas.” Charles Spurgeon

“Christmas is built upon a beautiful and intentional paradox; that the birth of the homeless should be celebrated in every home.” G.K. Chesterton

“The exciting quality of Christmas rests on an ancient and admitted paradox. It rests upon the paradox that the power and center of the whole universe may be found in some seemingly small matter, that the stars in their courses may move like a moving wheel around the neglected outhouse of an inn.” G.K. Chesterton

“God descends to re-ascend. He comes down; down from the heights of absolute being into time and space, down into humanity … down to the very roots and sea-bed of the Nature He has created. But He goes down to come up again and bring the ruined world up with Him. One has the picture of a strong man stooping lower and lower to get himself underneath some great complicated burden. He must stoop in order to lift, he must almost disappear under the load before he incredibly straightens his back and marches off with the whole mass swaying on his shoulders.” C.S. Lewis

“The central miracle asserted by Christians is the Incarnation. . . . If the thing happened, it was the central event in the history of the earth.” C.S. Lewis

“It is impossible to conceive how different things would have turned out if that birth had not happened whenever, wherever, however it did … for millions of people who have lived since, the birth of Jesus made possible not just a new way of understanding life but a new way of living it. It is a truth that, for twenty centuries, there have been untold numbers of men and women who, in untold numbers of ways, have been so grasped by the child who was born, so caught up in the message he taught and the life he lived, that they have found themselves profoundly changed by their relationship with him.” Frederick Buechner

“Who can add to Christmas? The perfect motive is that God so loved the world. The perfect gift is that He gave His only Son. The only requirement is to believe in Him. The reward of faith is that you shall have everlasting life.” Corrie Ten Boom

“The Almighty appeared on earth as a helpless human baby, needing to be fed and changed and taught to talk like any other child. The more you think about it, the more staggering it gets. Nothing in fiction is so fantastic as this truth of the Incarnation.” J.I. Packer

“You can never truly enjoy Christmas until you can look up into the Father’s face and tell him you have received his Christmas gift.” John R. Rice

4 Replies to “Christmas: Yes He Was One of Us”