It was Christianity that helped to create the West, including Europe, and it is the erosion of Christianity and the rise of Islam that is destroying the West – especially Europe. We see evidence of this everywhere, and the future is looking very grim indeed for much of the Western world.

Sure, there are some exceptions to all this, and we must not overlook them. Let me offer just three such quick vignettes before I look at the bad news. The first comes from the US state of Kentucky:

The “Year of the Bible” will apparently last 24 months in Kentucky. Gov. Matt Bevin has declared 2017 the “Year of the Bible” in Kentucky even though he proclaimed 2016 the “Year of the Bible” last December. Both proclamations pleased Pastor Mark Harrell of Victory Christian Fellowship church in Somerset, who said Wednesday that Bevin’s actions are in support of a statewide Bible reading marathon.
The “Kentucky 120 United Bible Reading Marathon” is a statewide event to get people in all 120 Kentucky counties to read aloud the entire Bible in the first three or so days of the new year. Harrell founded the effort with aid from a group of clergy known as the Kentucky Prayer Focus.
“We had the Bible-reading marathon last January and the governor and his family participated,” Harrell said. “He wanted it again. We are fortunate to have such a governor.” Harrell said he and Democratic state Rep. Tom Riner of Louisville, who also is a Baptist minister, asked Bevin to sign the proclamation for 2017 and “he graciously accepted as he did last year.”

The second example comes from Poland:

In a ceremony at the Church of Divine Mercy in Krakow, Poland on Saturday, the Catholic Bishops of Poland in the presence of President Andrzei Duda and many Catholic pilgrims, officially recognized Jesus Christ as the King of Poland and called upon Him to rule over their nation, its people and their political leaders.
“Immortal King of Ages Lord Jesus Christ, our God and Savior,” they declared at the ceremony, “bowing our heads before You, King of the Universe, we acknowledge Thy dominion over Poland, those living in our homeland and throughout the world. Wishing to worship the majesty of Thy power and glory, with great faith and love, we cry out: Rule us, Christ!”
As reported by Fr. Paul McDonald in Rorate Caeli and at Radio Maryja, the enthronement or recognition of Christ as King of Poland “was done in the official presence of the president of Poland [Andrzei Duda]” on Nov. 19 and was repeated at many Polish cathedrals and parishes on Sunday, Nov. 20.

The third example comes from the UK. In her annual Christmas message Queen Elizabeth was not afraid to mention the real reason for the season. As she said in her closing words:

At Christmas, our attention is drawn to the birth of a baby some two thousand years ago. It was the humblest of beginnings, and his parents, Joseph and Mary, did not think they were important.
Jesus Christ lived obscurely for most of his life, and never travelled far. He was maligned and rejected by many, though he had done no wrong. And yet, billions of people now follow his teaching and find in him the guiding light for their lives. I am one of them because Christ’s example helps me see the value of doing small things with great love, whoever does them and whatever they themselves believe.
The message of Christmas reminds us that inspiration is a gift to be given as well as received, and that love begins small but always grows. I wish you all a very happy Christmas. 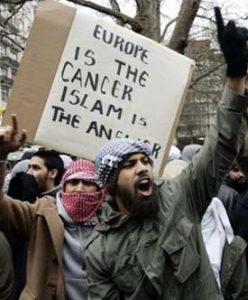 But plenty of bad news

All this is offset however by the continuing downward spiral of the West. Two recent articles from the Gatestone Institute highlight just how bad things are in Europe. They demonstrate the truth that as Christianity is receding there, secularism is not sufficient to take its place, and Islam instead is rushing in to fill the void.

As Giulio Meotti laments, “Islamists Attack Christmas, but Europeans Abolish It”. He looks at a number of examples of this occurring in France, then looks to the rest of Europe. Here are a few more:

The annual candlelit Saint Lucia procession, a Swedish Christian tradition celebrated for hundreds of years, is “dying” out. Uddevalla, Södertälje, Koping, Umeå, and Ystad are among the growing numbers of cities no longer holding this lovely cultural event. According to Jonas Engman, an ethnologist at the Nordic Museum, the declining interest in the St. Lucia procession accompanies a more general alienation from the culture of Christian Sweden. A study conducted by Gallup International reveals that in observing the Christian religion, Sweden is “the least religious in the West”. In the meantime, with a young, strong, driven sense of purpose and a set of sharia values, Islam is growing.
A German school in Turkey just banned Christmas celebrations. The school, Istanbul Lisesi, funded by the German government, decided that Christmas traditions and carol-singing would no longer be permitted. The Washington Post summarized the decision: “No teaching of Christmas customs, no celebrations and no Christmas caroling”. It is not an isolated incident. A Woolworth’s store in Germany also scrapped Christmas decorations, telling customers that the shop “is now Muslim”….
Belgium, the most Islamized democracy in Europe, is also purging its Christian heritage. The Nativity, the traditional manger scene, has not been put up in the Belgian town of Holsbeek, just outside Brussels. Claims were it was scrapped to “avoid offending Muslims”.
As reported by the newspaper La Libre, school calendars within Belgium’s French speaking community are also using a new secularized terminology: All Saints Day is now be referred to as Autumn Leave; Christmas Vacation is now Winter Vacation; Lenten Vacation is now Rest and Relaxation Leave; and Easter is now Spring Vacation. Then Belgium installed an abstract, de-Christianized Christmas tree in the capital, Brussels.
In the Netherlands, the Christian tradition of Black Pete is under attack and it will soon be abolished. In Italy, Catholic priests this year canceled Christmas to “avoid offending Muslims”.

The final result of Europe’s self-destructive secularism could seriously be a Caliphate, in which the fate of its ancient and beautiful churches recapitulates those in Constantinople, where the Hagia Sophia, for thousand years Christianity’s greatest cathedral, was recently turned into a mosque. The muezzin’s call now reverberates inside this Christian landmark for the first time in 85 years. Islamic terrorists targeted Christmas in Berlin, but it is the Christian secularists who are abolishing it all over Europe.

The second piece looks specifically at Germany. Things are also looking very grim there. Introductory bullet points to the article “The Suicide of Germany” are worth sharing here:

-Of the 1.2 million migrants who arrived in Germany in 2014 and 2015, only 34,000 found work.
-Angela Merkel went to lay white roses at the scene of the Christmas market attack in Berlin. Thousands of Germans did the same. Many brought candles and cried. But anger and the will to combat the threat remained largely absent.
-Nothing better describes the present state of Germany than the sad fate of Maria Landenburger, a 19-year-old girl, murdered at the beginning of December. A member of a refugee relief organization, Landenburger was among those who welcomed migrants in 2015. She was raped and murdered by one of the people she was helping. Her family asked anyone who wanted to pay tribute to their daughter to give money to refugee associations, so that more refugees could come to Germany.
-The law that condemns incitement to hatred, presumably intended to prevent a return to Nazi ideas, is held like a sword over whoever speaks too harshly of the growing Islamization of the country.
-The great majority of the Germans do not want to see that Germany is at war, because a merciless enemy has declared war on them. They do not want to see that war has been declared on Western civilization. They accept defeat and docilely do what jihadists want them to do: they submit.
-If Angela Merkel does not see the difference between Jews exterminated by the Nazis, and Muslims threatening to exterminate Christians, Jews and other Muslims, she is even more clueless than it seems.

Yes things are looking very bad indeed in much of the West. As mentioned, there are a few places where some sanity remains, and some see that neither secularism nor Islam can save Europe. Only a vibrant and life-giving Christianity can do that.

Whether the little glimmers of hope I mentioned above can offset the gathering darkness remains to be seen. But the West cannot long continue on the path it is on. It either returns to its Christian roots or it continues on the path of destruction. Choose wisely.

16 Replies to “The Ongoing Death of Europe”