Various Western leaders, elites and media commentators are enabling and encouraging Islamic terrorism in our lands by refusing to think honestly and realistically about Islam. They are allowing political correctness to blind them to the reality that their enemies are staring them in the face – with guns loaded.

Indeed, when those who hate the West, Christianity and freedom openly tell us that they intend to kill us and enslave us, then we had better stand up and take notice. But these dhimmi dupes are so overdosed on political correctness that they will bend over backwards defending all things Islamic, while attacking anyone who dares to state the obvious.

A leading US expert who knows all about this has just been interviewed, and his words of warning are desperately needed today:

One of the men who interrogated 9/11 mastermind Khalid Sheikh Mohammad told Fox News’ “The Kelly File” Wednesday that political correctness “started that chain” that led to Monday night’s truck attack on a Berlin Christmas market.
“[It] was political correctness and their unwillingness to get this person out of their country who had no business being there because he didn’t have the right paperwork to prove who he was,” said Dr. James Mitchell, referring to Anis Amri. German authorities Wednesday named Amri as the suspect in the attack, which killed 12 people and injured 48 others, touching off a continent-wide manhunt.
Mitchell said that he and Mohammed, commonly known as KSM, had discussed the damaging potential of smaller, “lone-wolf”-style attacks more than a decade ago. Mitchell noted that Mohammed had been particularly struck by the terror caused by the 2002 D.C. sniper attacks.
“For him, what surprised him was how much paralysis it caused given how few deaths were involved, few from his perspective,” Mitchell told host Sandra Smith. “And what he said to me was our civil liberties and our openness and our willingness to be responsive to other peoples’ cultures … were weaknesses and flaws that his God, Allah, had put into the American culture so that we could be defeated.”
Mitchell added that Mohammed believed that the easiest way to win what he called “the long battle to take over the world with Sharia law” was through “through immigration and by outbreeding non-Muslims.”
“He said that like-minded jihadi brothers would immigrate to Western democracies and to the United States, they would wrap themselves in our civil liberties for protection,” Mitchell said, “they would support themselves in our welfare systems while they spread their jihadi message, and then, when the time was right, they would rise up and attack.” 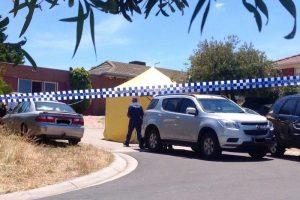 We see this happening on a daily basis. In fact, his words could not be more relevant. Just today we had a perfect example of this PC dhimmitude, with clueless (or worse) leaders denying what is staring them in the face. In Melbourne seven people who had planned to attack key sites in the city on Christmas Day were arrested in morning raids.

They were accused of plotting an “explosive act” which could kill or injure a “substantial” number of people in areas like Flinders Street Station, Federation Square, and St Paul’s Cathedral. The terrorists were said to be radicalised by IS propaganda and this was clearly to be an act of Islamic terrorism.

Yet incredibly – but not unexpectedly – we had the Victorian Premier, Dan Andrews, saying this plot was an “evil act” and “not an act of faith”! He said: “Not acts of religious observance, not acts of faith … they’re anything but that.” Wow, talk about mind-boggling stupidity, blindness, political correctness and a traitorous defence of the bloody political ideology of Islam.

With such idiocy he is putting all Victorians at risk. Thankfully our normally PC Prime Minister Malcolm Turnbull was not so hesitant about stating the obvious. He said:

This is one of the most substantial terrorist plots that has been disrupted over the last several years. I want to thank the men and women of the police in Victoria, the Australian Federal Police and ASIO and other agencies, for their work in thwarting this terrorist activity which was an Islamist terrorist plot inspired, as the Victorian Police Commissioner just observed a moment ago, by Daesh or ISIL. It has been a very complex investigation and it speaks volumes for the competence and professionalism of our police and security agencies which are the best in the world.

At least he mentioned the “I” word this time. But Australia is not alone in all this. We had similar things happening in the UK as well with Prince Charles once again saying some incredibly foolish and dangerous things about Islam. Amazingly, he tried to make a moral equivalence between Jesus Christ and Muhammad, claiming both were refugees seeking freedom. He said this in a radio address:

Normally at Christmas we think of the Birth of our Lord Jesus Christ. I wonder though if this year we might remember how the story of the nativity unfolds, with the fleeing of the holy family to escape violent persecution. And we might also remember that when the prophet Muhammad migrated from Mecca to Medina he was seeking the freedom for himself and his followers to worship.
Whichever religious path we follow, the destination is the same – to value and respect the other person, accepting their right to live out their peaceful response to the love of God.

Oh good grief. He is clueless about Islam – and Christianity – and is offering more politically correct dhimmitude, thus further enabling the terrorists. Robert Spencer was quick to demolish the foolish claims of the Prince of Wales:

According to Islamic tradition, when Muhammad migrated from Mecca to Medina, he wasn’t just “seeking the freedom for himself and his followers to worship.” He became at that point for the first time a political and military leader as well as a religious one. He began for the first time to get Qur’anic “revelations” exhorting Muslims to wage war against unbelievers.
Just as Charles is ignoring the historical context and circumstances of Muhammad’s hijrah, so now he is also ignoring the manifest fact that all too many Muslim migrants are not “seeking the freedom…to worship,” but are coming to Europe to conquer and Islamize the land, emigrating, after Muhammad’s pattern, “for the sake of Allah” (cf. Qur’an 4:100).
Charles also says: “We are now seeing the rise of many populist groups across the world that are increasingly aggressive towards those who adhere to a minority faith.” This is the familiar “Muslims are the new Jews” theme. This is a common Leftist talking point. Many, many others have made this claim before Charles, including Noam Chomsky; Bernie Sanders; the notorious non-Muslim Islamic apologist Karen Armstrong…

Once again political correctness and an appalling ignorance of what Islam is really all about is feeding and fuelling the rise in Islamist terror in the West. We keep making excuses for the jihadists, and keep refusing to name the enemy. That is a recipe for national suicide, and that is exactly what we are seeing all over the West.

As Mark Steyn put it concerning the Berlin terror attack, twelve Germans were killed due to reckless Western leaders. He derides our clueless commentariat and leadership, neither of whom “so much as raised the question of why people who want to murder you for attending a Christmas market are in your country in the first place — even as the familiar rituals of this latest vehicular misfortune emerged.”

But relax. Malcolm Turnbull assured us an atrocity or 10 back that it is “a very, very small percentage” of the Muslim community who are “violent extremists”. Like other similarly soothing Western leaders, he never actually tells us what percentage it is — 1 per cent, 0.1, 0.0001 — but I’m sure he knows, or he wouldn’t say it so breezily, would he?
And at least our leaders are agreed it is a percentage. A percentage is a simple concept: If 0.001 per cent of the Muslim community are “violent extremists” and you have 100,000 Muslims, then, yes, it’s “a very, very small percentage” — and a small number. If you admit another 100,000 Muslims, you’ve doubled the number of “violent extremists”.
And, whether you keep on doing that year in year out or just cut to the chase and import (as Angela Merkel did) 1.5 million in one fell swoop, then, regardless of whether the percentage is stable, you are importing more and more people who want to kill your own citizens. Why? What’s the benefit? And why do people like that Birmingham tourist think the answer to more and more Muslims is more and more bollards?

Yep, just forget about the real causes of the problem, and keep spinning out cheap PC excuses. Our leaders might feel real good about this, but how many more people will have to be slaughtered on our own streets before we finally wake up?