We know that Islamists hate Christianity and are happy to carry out diabolical attacks on it, using vehicles as weapons. It looks like Islamists may not be the only ones who engage in such deadly activities. The Australian Christian Lobby has had a van filled with gas bottles rammed into its offices last night, and it is looking very suspicious indeed.

It occurred just over 12 hours ago, and the driver of the van is badly injured with burns, so it is too early to say for certain that this was a deliberate attack, but it seems likely to have been so. The shocking episode has already had plenty of media coverage and rightly so.

Just after we saw another truck rammed into a Christmas crowd in Berlin, now this. Lyle Shelton who heads up the ACL was visibly shaken as TV cameras interviewed him this morning. He said he and his staff had received plenty of death threats simply for standing up for traditional marriage and wanting to protect children from harmful agendas like that of the “Safe Schools” militancy.

This is a scene of absolute devastation. I never thought in coming to work for a public advocacy organisation like ACL that we would be subject to this sort of thing. This is not the Australia that I grew up in.
I don’t know the motivation of last night’s attack but the context of what I see is in the context of multiple death threats and threats of violence that my staff have endured over the course of this year. We’ve had to have this building locked for most of this year, we’ve never done that in the eight or nine years that I’ve worked here. This is a truly shocking situation for us. 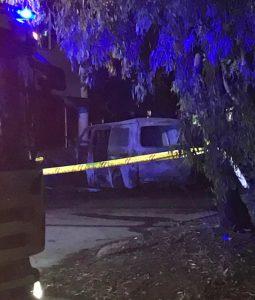 For those who still have not heard the details on this, here is part of one media report on this:

A van filled with gas bottles has exploded after it rammed into the headquarters of the Australian Christian Lobby (ACL) in what the managing director has called an “attack on free speech”. ACL managing director Lyle Shelton tweeted the incident last night, saying a vehicle had rammed its office in Canberra just after 9:30pm.
Mr Shelton added that staff were safe, and photos he shared showed a burnt-out van in the car park near the building’s entrance. It remains unclear whether the incident was an accident or a targeted attack, but ACT police have confirmed they are investigating.
Police also said the male driver of the vehicle was the only person injured and that he had been taken to Canberra Hospital. The ABC understands the man was seriously injured in the blaze. Mr Shelton said he was shocked this could happen in Australia and described the explosion as a “targeted attack”.
“There is no doubt in my mind that ACL was the target,” he said. “Obviously we don’t know the motives of the person who drove this van, but we have received a number of death threats and threats of violence over the course of this year that we have reported to police.

Other leaders have expressed their deep concern about this incident:

Deputy Prime Minister Barnaby Joyce tweeted that the explosion was a “disgusting attack … [and] must be condemned by all”.
One Nation leader Pauline Hanson also took to social media, saying she was glad nobody was injured and hoped “police will soon find out who committed this cowardly attack”.
Coalition backbencher George Christensen tweeted that if the attack was politically motivated “it is disgraceful and should be denounced”.

Hatred of conservative Christian groups is of course sadly quite common. If you go to Facebook you will see a “F**k the australian christian lobby” page which FB evidently considers to be just fine. I too have FB pages which are set up by my enemies which feature some very vile and hateful material.

And if you type my name into google you will find various pages devoted to attacking and abusing me as well. The same for the ACL. So anyone who stands up for pro-family, pro-faith and pro-life issues will be targeted by the haters. I too have had plenty of hate mail over the years – many hundreds, if not thousands by now.

I too have had the occasional death threats. So the ACL is not alone in this hate and abuse. Any Christian who stands boldly in the public arena and challenges some of the radical agendas of the day knows all about this sort of animosity and opposition.

We can be thankful that no one was killed in this incident. We need to keep praying for the ACL and Lyle Shelton and all those who work there. This is not a walk in the park, but all out spiritual warfare, which manifests itself in episodes like this.

Now is not the time to shrink back or retreat because of cowardice. Now is the time to stand even stronger and more resolutely, asking God for his protection as we proclaim truth and seek to set the captives free.

Now some media outlets are reporting that the police have said they briefly interviewed the man and the incident was not politically, religiously or ideologically motivated. Hmm. As one person on the social media just said about this: “I just saw that quote on news.com.au. So what we have is a random bloke driving around with gas bottles in his van; he randomly finds a building that deals with political, religious, and ideological issues, and then he randomly rams the building and sets the gas bottles alight… Yeah, I can see how that makes sense.”

34 Replies to “ACL: Are the Activists Ramping Things Up?”