OK, this time a popular nightclub in Istanbul frequented by Westerners is targeted by terrorists. So far we have around 35 dead and 40 injured. It is still early days, but the terrorists were said to have spoken Arabic (ruling out most Southern Baptists, I would think), and we likely will soon enough learn of their actual identities. 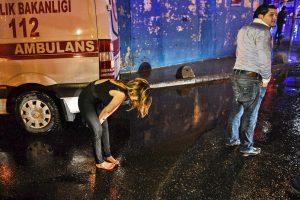 Let me offer some early reports on this. The New York Times starts their report this way:

Attackers dressed in Santa Claus suits opened fire inside a packed Istanbul nightclub shortly after midnight on New Year’s Day, killing at least 35 people and wounding dozens more, Turkish officials said. Gov. Vasip Sahin of Istanbul Province called it a terrorist attack.
The attack occurred about 1:15 a.m. at the nightclub, Reina, where as many as 600 people were celebrating the New Year, officials said. Mr. Sahin said the attackers — initial reports said there had been as many as three — had fired on the police before heading inside the club.
“One person first kills the police officer outside, and then a civilian,” the governor said. “Inside, he rained bullets brutally, mercilessly over innocent people who were there just to celebrate the New Year and have fun.” The club overlooks the Bosporus — which separates Europe and Asia — and some clubgoers jumped into the water in their panic over the attack.

More details come from The Independent:

The attackers are believed to have shot at police outside the nightclub before entering and firing on people inside using a long-barrelled weapon, according to the city’s governer Vasip Sahin, who described the event as a “terror attack” but did not name who he thought responsible. “Unfortunately (he) rained bullets in a very cruel and merciless way on innocent people who were there to celebrate New Year’s and have fun,” Mr Sahin said.
Some customers jumped into the waters of the Bosporus to escape the attack, reports claimed. At least six ambulances were outside the club transferring the injured to hospital for treatment. As many as 600 people are thought to have been in the club when the attacker entered it, not longer after midnight. At least one armed man was involved in the attack, reported NTV, and police launched an operation to capture an assailant who was said to have been in the club after initial reports. He may have been dressed in a “Santa costume”.

And further info from the BBC:

There were reportedly as many as 700 people in the nightclub at the time of the attack, some of whom are believed to have jumped into the river to escape. Dogan news agency reported that some witnesses claimed the attackers were “speaking Arabic” while Turkish television channel NTV said special force police officers were searching the nightclub.
Istanbul was already on high alert with some 17,000 police officers on duty in the city, following a string of terror attacks in recent months. Many were carried out by so-called Islamic State (IS) or Kurdish militants.

Vasip ?ahin, the governor of Istanbul, announced that 35 people lost their lives and 40 others were wounded in a terrorist attack in Be?ikta?. ?ahin, who was also in charge of explaining to the journalists about the incident, said, “A terrorist in an entertainment center during the night of 01.15 entered the city by martyring a police officer waiting in front of the door with a long barrel weapon and then martyring a citizen behind.
Unfortunately, he was brutally and brutally inside. This is a terrorist attack. At least 35 of our citizens have lost their lives. One of them is a police officer. At least 40 injured people are under treatment in the hospital. They are doing research. So we will use detailed expressions.

Once again the Western media is very coy about calling this another act of Islamic terror, even though the governor of Istanbul has at least called it a terror attack, presumably by Arabic-speaking gunmen. Western television and newspaper reports are still skirting around the issue of the motivation for this.

But as I say, this latest attack is only hours old, so presumably we will learn more details in the near future. But the point is, 2017 is starting out exactly like 2016 ended: with more terrorism, slaughter and bloodshed. The question is, will the West wake up before it is too late?

5 Replies to “Another Day, Another Islamic Slaughter”