There is one set of events happening all too often, while another one never seems to happen at all. The former has to do with Christian churches and Christian leaders bending over backwards to accommodate Islam. Nothing wrong with some religious friendliness, but I am talking here about bringing Muslims into Christian worship services, and so on. 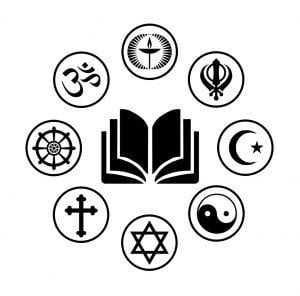 I have discussed a number of these cases where Muslim prayers, sermons and the like are being held in Christian venues. One rather notorious case from overseas I discussed here: billmuehlenberg.com/2014/02/08/one-brave-christian-woman-contra-mundum/

And the latter has to do with the reverse: Christians being allowed to hold Christian worship, prayer or preaching in a Muslim mosque. Now unless I have missed something here, this is just not happening. It is all one-way traffic: Muslims are taking advantage of gullible and foolish Christian leaders to push their agenda in Christian circles, while we are never allowed to return the favour.

Of course those Christian leaders going along with all this will say this is the loving and Christian thing to do. They claim the Bible insists upon such ecumenical shindigs and interfaith get-togethers. But as will be seen in a moment, that is not the case at all. But first let me offer two more recent examples of Christians acting as deluded dhimmis.

The first comes from West Australia where a church has allowed Muslims to come in and hold prayer services there. The pastor actually offered the main church for these services, but in the end the community hall was selected. As one news report says of this:

A search for somewhere convenient for Friday prayers has led to an unusual joining of two communities. Every Friday, St Paul’s Anglican church in Beaconsfield, just outside Western Australia’s port city of Fremantle, hosts Muslim prayers in its community hall. Fittingly, the hall was the original church.
The enterprise began shortly after Imam Feizel Chothia knocked on the door of Reverend Peter Humphris. Mr Chothia said he had been trying to find somewhere convenient for Muslim workers to pray in the Fremantle area with little success.
“I thought to myself that it would be wonderful to pray in this beautiful church,” he said. “It certainly has the aura of the sanctity associated with prayer, it certainly is a symbol of the divine and it’s the most appropriate place. “I wasn’t sure how my request would be received, but thank god for Peter.”
Peter Humphris said he was delighted by the request and eager to welcome another community to the church. “My sense, and the sense of the parish here, is that we continue to seek both the fullness of humanity and the fullness that’s revealed in the divine,” he said.
“We haven’t got it, we continue to seek it and anyone, and everyone, who wants to join in that search can only help.”
The reverend initially offered the main church for prayers, which Mr Chothia said was an honour but added he did not want to inconvenience anyone. They settled on the community hall. On the first day, Mr Humphris said he was thanked by one of the Muslim parishioners who said that he prayed one day all religions would be one.

Thankfully not everyone was happy with this capitulation:

But despite the generosity and quest for meaning between the two spiritual leaders, some of the Anglican parishioners have not welcomed the move and have left the church. Mr Humphris said they had written to his superiors to try to get him “to toe the line”. He said the objection was simply because they were Muslims.

The other case just occurred in Scotland. A Muslim did a Koran reading at an Anglican cathedral. As one report from a Christian site states:

Christians are familiar with the Bible texts that detail the conception and birth of Jesus to His mother, the Virgin Mary. But they are not so used to hearing the Muslim version of the story read out in church. And especially not on Epiphany, which celebrates the incarnation of God as His son Jesus – a doctrine denied by Muslims….
The congregation at St Mary’s cathedral heard the Muslim version of the Virgin Mary’s conception of Jesus, from the Koran’s Sura 19, sung by Madinah Javed. The passage explains how Mary gave birth after an angel told her God would give her a child. Muslims believe Jesus was a prophet, and that He was a precursor to Mohammed rather than the Son of God. Sura 19 states that Mary was “ashamed” after she gave birth, and that the infant Jesus miraculously spoke to her from his crib and claimed he was “a servant of God”. It denies Jesus was the Son of God. A post on the cathedral’s Facebook page describes the service as a “wonderful event”. It says: “The congregation was also reminded during the service that it is not only Christians who give honour to Jesus. We were joined by friends from two local Muslim communities.” The post also shares a video of the recitation.

Thankfully once again, not everyone was thrilled by this:

Michael Nazir-Ali, a leading evangelical Christian in Britain, has now condemned the reading on a service at the Scottish Episcopal Church’s Glasgow Cathedral last Friday….
“The authorities of the Scottish Episcopal Church should immediately repudiate this ill-advised invitation,” he said in a statement. He also called for the Archbishop of Canterbury, Justin Welby, to publicly distance the Church of England and the wider Anglican Communion from the event.
“Christians should know what their fellow citizens believe and this can include reading the Qur’an for themselves, whether in the original or in translation. This is not, however, the same thing as having it read in Church in the context of public worship,” he said.
“It is particularly insensitive to have this passage read in Church on the Feast of the Epiphany when we celebrate not only Christ’s manifestation to the gentiles but also his baptism and the divine declaration, ‘you are my beloved son in whom I am well pleased’.”

There are plenty other examples of this occurring. As mentioned, those confused Christian leaders who think this is a neat and loving thing to do need to get back to their Bibles. Scripture nowhere endorses such interfaith nonsense, but instead strongly condemns it.

I have written about this often before, eg.,: billmuehlenberg.com/2009/12/02/christianity-and-religious-syncretism/

And I have warned about how Muslims are using these sorts of events to promote Islam and neutralise Christianity, eg.: billmuehlenberg.com/2008/11/10/islam-and-fifth-columns/

And in my daily Bible reading today I came across a passage which seems fully relevant to this issue. Those really keen on interfaith dialogue might have a problem with it however: “On that same night I will pass through Egypt and strike down every firstborn of both people and animals, and I will bring judgment on all the gods of Egypt. I am the Lord” (Exodus 12:12).

Yahweh’s idea of dealing with the false gods in Egypt was not to have a joint worship service but to bring about divine judgment. This is always how God thinks about false gods and false religions. Plenty of other passages can be appealed to here. Just one more is Deuteronomy 12:1-3:

These are the decrees and laws you must be careful to follow in the land that the LORD, the God of your fathers, has given you to possess—as long as you live in the land. Destroy completely all the places on the high mountains and on the hills and under every spreading tree where the nations you are dispossessing worship their gods. Break down their altars, smash their sacred stones and burn their Asherah poles in the fire; cut down the idols of their gods and wipe out their names from those places.

And lest people think that is just Old Testament sort of stuff, we see the same attitude on display in the New. As Revelation 9:20 says for example, “The rest of mankind that were not killed by these plagues still did not repent of the work of their hands; they did not stop worshiping demons, and idols of gold, silver, bronze, stone and wood—idols that cannot see or hear or walk.”

I am not suggesting of course that Christians should go around smashing the worship places of other religions. But I am saying we should not be allowing those of other religions which directly contradict and deny the Christian faith to have open slather in our worship services.

10 Replies to “Interfaith or Biblical Faith”