OK, another milestone I guess. And I even have a very famous pop song to commemorate it with. Most of you would be familiar with “When I’m Sixty-Four.” It is of course a classic song by the Beatles, released in 1967 on their Sgt. Pepper’s Lonely Hearts Club Band album.

It was a forward-looking tune back then of course. The first verse has these lyrics:

When I get older losing my hair
Many years from now
Will you still be sending me a valentine
Birthday greetings, bottle of wine?

Those are now questions I no longer have to ask – I can experience the reality of it for myself. Yes, I am certainly losing my hair. I don’t know about the valentine, but I did get both a birthday card and a bottle of wine. But consider a few hard facts here.

When the song first came out I was just 14 years old. Paul McCartney, who sang it, was 25. He is now 74, and today – as you may have guessed – I have just turned 64. So the song takes on new meaning at the moment. But what is really mind-boggling is the song appeared a full 50 years ago!

Where in the world did five decades go in such a short period of time!? It seems like just yesterday I had bought this album. Indeed, as the Beatles sang in another song released two years earlier:

Yesterday all my troubles seemed so far away.
Now it looks as though they’re here to stay.
Oh, I believe in yesterday.

Suddenly I’m not half the man I used to be.
There’s a shadow hanging over me.
Oh, yesterday came suddenly. 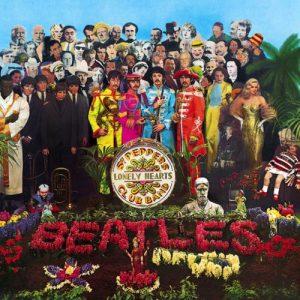 There sure have been a lot of changes happening over that half century. Two of the four Beatles are now dead. America has been through ten presidents since the song came out. We have had the Vietnam War, the assassination of Martin Luther King, the first man on the moon, Woodstock, the fall of the Berlin Wall, several Gulf Wars, September 11 and the rise of Islamism, to name but a few momentous events.

And of course the Internet-, computer- and technology-revolution has since burst on the scene, which is why you are reading this here and not elsewhere. Indeed, the Internet was invented in 1973, and the first Apple personal computer appeared in 1976.

If everything I have just mentioned sounds all rather familiar to you, that makes you an old guy – just like me. Imagine that: 64! So much has happened – and so very quickly. I was just a youngster back then when the album containing that single appeared. I had just finished my middle year of junior high school.

Just like the Beatles and so many others, I too would soon start experimenting with drugs, eastern religions, and all things weird and wild. And because of all this, a lot of my rock heroes started dying back then:

During this time some of my friends were dying too – by drug overdoses or suicide. Both should have taken my life as well, but somehow I survived, only to become a Christian in August of 1971 at age 18. But those heady days are recounted in my four-part testimony which can be read here: billmuehlenberg.com/2012/06/27/coming-home-my-testimony-part-1/

But let me continue my story – ever so briefly – right up to today. After my radical conversion to Christ, I went back to my hometown in Wisconsin, and became active in Christian work: evangelising, leading home Bible studies, and so on.

In 1975 I went to a Christian college in Chicago for two years, then a year at the University of Wisconsin in Madison. I then got involved with Youth With a Mission, first in the US, then in Europe. I met my Australian wife while there in Holland, and we then left YWAM in 1984.

I finished my BA in Chicago at another college and then completed an MA in Boston. Then we moved to Melbourne in 1989. There I worked for various groups over the years, including the IPA, Quadrant, the AFA, Salt Shakers, and Focus on the Family. After that I started CultureWatch ten years ago.

I have penned nearly 4000 articles and written a number of books over these years. I have spoken and taught throughout Australia and overseas. Oh, and I have picked up a few books for my library along the way as well. I mention all this simply to highlight the truth that time sure flies.

One day I was a young kid listening to the Beatles on my old record player at home, and the next thing I know – 50 years later – I am reminiscing about all this! Wow. Where did all that time go? And have I spent it wisely? I have often referred to Malcom Muggeridge’s autobiography, Chronicles of Wasted Time.

That title seems to reflect too much of my life. I have been on this planet for 64 years now, but what have I got to show for it? How much time have I wasted, frittered away on trivial pursuits and that which does not matter? I look back and I cringe at how often I have been such a poor servant of Christ, a poor husband, a poor father, and so on.

I know I will soon stand before my maker and my judge to give an account. It is somewhat frightening to consider. Sure, because of the finished work of Christ at Calvary, I have my sins forgiven and a right standing with God. But the works I have performed, or left undone, will be weighed up and assessed.

I fear I am so far from where I should be. Time has gone by so fast and I have done so little for my Lord. And time is running out. As you age all sorts of aches and pains and illnesses etc., creep up on you. My wife who is younger than I has already had a hip replacement!

Decades gone – like a puff of smoke. As Isaiah and Peter put it, “All people are like grass”. Or as James put it, “You are just a vapor that appears for a little while and then vanishes away.” Sure, being 64 is not all that old – but it seems that way to me. I have no idea how much longer I will be alive.

How much would I have done differently had I a chance to do it all over again? That is of course not something to spend time worrying about – I cannot go back and relive my days. All I can do now is seek to live what days I do have left fully for Christ and for the glory of God.

Since I have been quoting the Beatles, let me do so one last time. Back in 1965 the song “Nowhere Man” was released. It began with these words:

He’s a real nowhere man
Sitting in his nowhere land
Making all his nowhere plans for nobody
Doesn’t have a point of view
Knows not where he’s going to
Isn’t he a bit like you and me?

Far too many people are like that. But that is not how the Christian should be. If you feel you have wasted so much of your life, the good news is, it is never too late to rededicate yourself to Christ and to living a worthwhile life. No matter how much of life we may have wasted, God is able to make up the years that the locusts have eaten, as we read about in Joel.

Please don’t wait until you are 64 before you start considering seriously your life and how it has been used for God. Start pondering seriously on these matters now, regardless of your age. Let me close with a few quotes from the terrific 2003 volume by John Piper, Don’t Waste Your Life:

“You get one pass at life. That’s all. Only one. And the lasting measure of that life is Jesus Christ.”

“We waste our lives when we do not pray and think and dream and plan and work toward magnifying God in all spheres of life. God created us for this: to live our lives in a way that makes him look more like the greatness and the beauty and the infinite worth that he really is.”

“Desire that your life count for something great! Long for your life to have eternal significance. Want this! Don’t coast through life without a passion.”

“But whatever you do, find the God-centered, Christ-exalting, Bible-saturated passion of your life, and find your way to say it and live for it and die for it. And you will make a difference that lasts. You will not waste your life.”

“No, you don’t have to be a missionary to admire and advance the great purposes of God to be known and praised and enjoyed among all peoples. But if you want to be most fully satisfied with God as he triumphs in the history of redemption, you can’t go on with business as usual—doing your work, making your money, giving your tithe, eating, sleeping, playing, and going to church. Instead you need to stop and go away for a few days with a Bible and notepad; and pray and think about how your particular time and place in life fits into the great purpose of God.”