I get asked this question every so often, so it may be time to do an article on this. I have hesitated up until now for the simple reason that this is another one of those issues which, unfortunately, some Christians can go ballistic about, hurling anathemas at anyone who dares to differ with them. 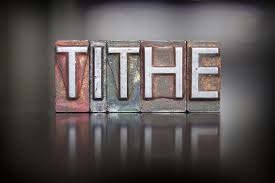 But let me here try to offer just a very brief, introductory look at this topic. Before I go any further let me offer some preliminary remarks:

-At the risk of being overly simplistic, one could mention three main positions on this:
A. The Christian must tithe.
B. The Christian does not have to tithe.
C. The Old Testament provides helpful principles on this, but we have no clear law on this in the New.

-This is not a salvation issue. It is an important issue, but it is not one that will keep a person out of heaven if they happen to believe the “wrong” thing about this. It is a secondary issue, not a primary issue. The latter would include things like the deity of Christ, the triune nature of the Godhead, and the authority of Scripture.

-While tithing is mentioned in various places in the Old Testament, there is no clear or direct command to tithe found in the New Testament. Instead we find much there on generous giving.

Let me look a bit more closely at these last two points. As to the first of these, most believers follow the helpful and long-standing (although not perfect) three-fold division of the OT law into the moral, ceremonial and civil. The moral law would certainly include the Ten Commandments, the ceremonial would have to do with the sacrificial system and so on, while the civil would deal with laws given to the nation of Israel.

Most Christians hold that the moral law continues into New Testament times, but not the other two. This of course is a big debate and a very complex one, and it cannot here be properly entered into. Suffice it to say that I basically agree with this way of approaching the OT laws.

The other issue, of NT commands about tithing, deserve a closer look. One thing to note is how infrequently the New Testament even mentions the tithe. There are actually only four references to the term. The first two are parallel passages:

Here Jesus seems to regard tithing as being set against the weightier matters of the law, such as justice. That does not necessarily mean he believes that tithing is of no importance, but that it seems to be of relative importance compared to some other matters.

The third reference involves the words of a Pharisee as found in Jesus’ parable of the Pharisee and the Tax Collector:

There is nothing here of course about a command to Christians to tithe.

The fourth reference is found in the book of Hebrews, a decidedly very Jewish-orientated book. Hebrews 7:1-10 discusses the rather mysterious character Melchizedek (who we first read about in Genesis 14). Here are verses 4-10:

See how great this man was to whom Abraham the patriarch gave a tenth of the spoils! And those descendants of Levi who receive the priestly office have a commandment in the law to take tithes from the people, that is, from their brothers, though these also are descended from Abraham. But this man who does not have his descent from them received tithes from Abraham and blessed him who had the promises. It is beyond dispute that the inferior is blessed by the superior. In the one case tithes are received by mortal men, but in the other case, by one of whom it is testified that he lives. One might even say that Levi himself, who receives tithes, paid tithes through Abraham, for he was still in the loins of his ancestor when Melchizedek met him.

Because the book itself is subject to a wide range of interpretations, as is our understanding of who Melchizedek is and what he represents, this is not the best passage to appeal to if you want to make the case that Christians must tithe. Sure, it is a passage we must wrestle with, but even when combined with the other three texts, we have no clear command for NT believers regarding tithing.

Thus that is all we find in the NT in terms of a direct defence to the tithe. None are a clear command for Christians to tithe. Of course the pro-tithe camp will try to claim these passages nonetheless for their purposes. Fair enough, but the truth is, while the tithe is mentioned so rarely in the NT, the subject of giving is mentioned quite a lot.

Some large portions of Paul’s writings for example are devoted to the issue of giving, most notably 2 Corinthians 8-9. And the principles offered there are rather clear: God wants us to be generous givers. Let me just share one portion of this here (2 Cor. 9:6-8):

The point is this: whoever sows sparingly will also reap sparingly, and whoever sows bountifully will also reap bountifully. Each one must give as he has decided in his heart, not reluctantly or under compulsion, for God loves a cheerful giver. And God is able to make all grace abound to you, so that having all sufficiency in all things at all times, you may abound in every good work.

The grace of giving is emphasised here, not a legalistic requirement. Of course other NT principles about giving could be discussed. One is the fact that giving seems to be enjoined based on our ability to give. Two passages on this can be mentioned:

1 Corinthians 16:2 On the first day of every week, each of you is to put something aside and store it up, as he may prosper, so that there will be no collecting when I come.
2 Corinthians 8:12 For if the readiness is present, it is acceptable according to what a person has, not according to what he does not have.

Obviously so much more needs to be said on this topic, and I have left out various aspects to this debate. For example, one could explore things like the phrase “tithes and offerings” and what that means; one could look more closely at the two passages on tithing that appear before the Mosaic law (Gen. 14 – Abram – and Gen. 28 – Jacob); one can ask where or to whom exactly the tithe should go; and so on.

What I offered here are just a few considerations, and I fully realise that there are indeed differences of opinion on all this. However, I can already imagine those with passionately held views might wish to come out swinging here. Let me advise otherwise. The last thing I need is another major all-out fight on a secondary matter!

So if people ask me what I think of the tithe for believers, the above is the sort of thing I would say in response. While we are not commanded to tithe, we are told to give, to give freely, and to give out of a thankful heart, based on God’s generous giving to us.

I know of many wealthy Christians who give the majority of their money away to the Lord’s work. And I know some believers who are struggling to find their next meal. I will not impose a ten per cent giving law on either of them. I am sure there are those who think I should be tarred and feathered for my views, but my advice would be to go to war over this elsewhere!

Not surprisingly, there are many books penned on this topic, and even more articles. Let me suggest just one book, which is helpful because it brings together in one volume several of the main views on this issue in a debate format. It is:
David Croteau, ed., Perspectives on Tithing: 4 Views. B&H, 2011.

23 Replies to “Should Christians Tithe?”