One of the most prolific, influential and important social commentators of recent times has just passed away at the age of 83. Michael Novak was a key Catholic thinker who wrote copiously on economic, political, social, ethical and theological themes. 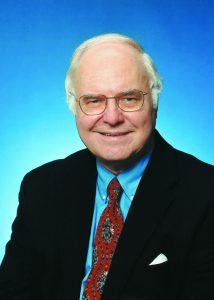 His influence on the debates over the moral standing of the free market has been enormous. His many volumes sought to make the case for economic and political freedom in general, and he composed numerous volumes arguing that capitalism, for all its faults, is the best system devised to lift the masses out of poverty and to prevent the menace of statism.

Like a number of influential intellectuals at the time, such as Peter Berger and Richard John Neuhaus, Novak began as a person on the left (he used to be a speech writer for George McGovern), but moved to the right. He chronicled this journey in his 2013 volume, Writing from Left to Right: My Journey From Liberal to Conservative.

For many decades, beginning in 1978, he worked at the American Enterprise Institute in Washington. He served as a U.S. Ambassador for a period, was awarded over two dozen honorary degrees, and had earned degrees in philosophy, English, theology and the philosophy of religion. He helped to found the Institute on Religion and Democracy in 1981 along with Richard John Neuhaus and others. In 1994 he won the Templeton Prize for Progress in Religion.

He was one of our most important thinkers and writers of recent times and sought to blend aspects of Catholic social thought with many of the key political and economic issues of the day. He penned around 50 books. Since I own around half of them, let me simply offer some of what I have just pulled off my shelves, listed from the most recent:

Social Justice Isn’t What You Think It Is – 2015
No One Sees God – 2008
The Universal Hunger for Liberty – 2004
Free Persons and the Common Good – 1988
Liberation Theology and the Liberal Society – 1987
Will It Liberate? – 1986
Toward the Future Catholic Social Thought and the US Economy: A Lay letter – 1984
Freedom With Justice – 1984
Moral Clarity in the Nuclear Age – 1983
Confession of a Catholic – 1983
The Spirit of Democratic Capitalism – 1982
The Corporation: A Theological Inquiry – 1981
Toward a Theology of the Corporation – 1981
Liberation North, Liberation South – 1981
Conversation with Michael Novak and Richard Schifter: Human Rights and the United Nations – 1981
Democracy and Mediating Structures: A Theological Inquiry – 1980
The Denigration of Capitalism: Six Points of View – 1979
Capitalism and Socialism: A Theological Inquiry – 1979
The American Vision: An Essay on the Future of Democratic Capitalism – 1978

As can be seen, Novak has written extensively on numerous themes. While many of his volumes are important works, perhaps his best known and most enduring work is his 1982 volume, The Spirit of Democratic Capitalism. It is a masterful treatment of how democratic capitalism is really a three-legged affair: a democratic political system; a free market economic system; and a moral/spiritual cultural system.

Given the huge importance of this volume, let me spend a bit of time on it. Early on in the book he asks, “Is there, then, a form for political economy most consonant with Judaic tradition and the Christian gospels?” While he recognises that no one political or economic system can be conflated with the Kingdom of God, he does see the free market system as coming closest to biblical values.

He argues however that free enterprise alone is not enough:

What the founders of democratic capitalism most feared is the gathering of all power into one. No human being, they believed, is wise or good enough to be trusted with undivided, unitary power. For this reason, they separated moral-cultural institutions like the press, the universities, the church and voluntary associations of free speech from the state. But they also separated economic institutions from the state….
Democratic capitalism is not a “free enterprise system” alone. It cannot thrive apart from the moral culture that nourishes the virtues and values on which its existence depends. It cannot thrive apart from a democratic polity committed, on the one hand, to limited government and, on the other hand, to many legitimate activities without which a prosperous economy is impossible. The inarticulate practical wisdom embedded in the political system and in the moral-cultural system has profoundly affected the workings of the economic system. Both political decisions and the moral climate encouraged this development. At various times in American history, both the political system and the moral-cultural system have seriously intervened, positively and negatively, in the economic system. Each of the three systems has modified the others.

He argues further about just how vital and necessary these three components are for this system to work:

What do I mean by “democratic capitalism”? I mean three systems in one: a predominantly market economy; a polity respectful of the rights of the individual to life, liberty, and the pursuit of happiness; and a system of cultural institutions moved by ideals of liberty and justice for all. In short, three dynamic and converging systems functioning as one: a democratic polity, an economy based on markets and incentives, and a moral-cultural system which is plural and, in the largest sense, liberal.

Thus his is not a rugged laissez faire system with no moral constraints. His is a free economy undergirded and guided by a free social and political system as well as a moral/spiritual culture. The three working together provide us with a workable system that is the best we can hope for in a fallen world.

The system is not perfect, but it is an ideal which is worth aiming for. Novak reminds us that it does not “measure up to the full standards of Jewish and Christian visions of the Kingdom of God.” But he goes on to say, “It does not pretend to do so.” The system has undoubtedly “failed its own ideals, in large ways and in small.”

But, “God has called for individuals and peoples to live according to His law and inspiration. Democratic capitalism has been designed to permit them, sinners all, to follow this free pattern. It creates a noncoercive society as an arena of liberty, within which individuals and peoples are called to realize, through democratic methods, the vocation to which they believe they are called.”

But this volume of over 400 pages needs to be read in its entirety to get the full sense of the case he seeks to make. And reading his entire corpus would be better yet. I for one am deeply indebted to this man, his thought, and his writings.

He has been a very important player in the key debates held in the West over the past half century. Like him, I have moved from left to right, and his writings have helped me to articulate my position and to explain my political and economic migration.

One Reply to “Michael Novak, RIP”