Writing an article about what the great Christian thinker, writer and apologist C. S. Lewis had to say about the issue of love is a rather foolhardy endeavour. Lewis wrote heaps on the topic, including his 1960 masterpiece, The Four Loves. So I can only discuss just a few aspects of his understanding of love in a short essay like this. 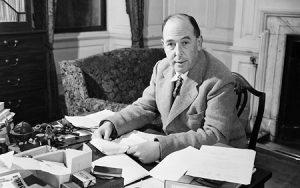 And there is good reason for discussing this. The world of course has little or no idea what real love is all about. For most folks, it is mostly about lust, selfishness and desire. It has nothing to do with the biblical notion of love. But sadly far too many Christians think no better than the world when it comes to the concept of love.

For way too many believers it is all just sentimental, syrupy, sickly emotions and feelings, and it looks nothing like what biblical Christianity has to say about the subject. They have replaced the biblical conception of love with what the world is running with. So it is time to again speak some biblical truth on this topic.

To do so, I want to give Lewis a chance to provide some sense on this, by means of two rather extended quotes from his works. The first comes from his absolutely essential reading volume of 1940, The Problem of Pain. Chapter 3 is on “Divine Goodness” in which he looks closely at what we mean when we talk about God and his love. He writes:

By the goodness of God we mean nowadays almost exclusively His lovingness; and in this we may be right. And by Love, in this context, most of us mean kindness—the desire to see others than the self happy; not happy in this way or in that, but just happy. What would really satisfy us would be a God who said of anything we happened to like doing, ‘What does it matter so long as they are contented?’ We want, in fact, not so much a Father in Heaven as a grandfather in heaven—a senile benevolence who, as they say, ‘liked to see young people enjoying themselves’ and whose plan for the universe was simply that it might be truly said at the end of each day, ‘a good time was had by all’. Not many people, I admit, would formulate a theology in precisely those terms: but a conception not very different lurks at the back of many minds. I do not claim to be an exception: I should very much like to live in a universe which was governed on such lines. But since it is abundantly clear that I don’t, and since I have reason to believe, nevertheless, that, God is Love, I conclude that my conception of love needs correction.
I might, indeed, have learned, even from the poets, that Love is something more stern and splendid than mere kindness: that even the love between the sexes is, as in Dante, ‘a lord of terrible aspect’. There is kindness in Love: but Love and kindness are not coterminous, and when kindness (in the sense given above) is separated from the other elements of Love, it involves a certain fundamental indifference to its object, and even something like contempt of it. Kindness consents very readily to the removal of its object – we have all met people whose kindness to animals is constantly leading them to kill animals lest they should suffer. Kindness, merely as such, cares not whether its object becomes good or bad, provided only that it escapes suffering. As Scripture points out, it is bastards who are spoiled: the legitimate sons, who are to carry on the family tradition, are punished. (Hebrews 12:8) It is for people whom we care nothing about that we demand happiness on any terms: with our friends, our lovers, our children, we are exacting and would rather see them suffer much than be happy in contemptible and estranging modes. If God is Love, He is, by definition, something more than mere kindness. And it appears, from all the records, that though He has often rebuked us and condemned us, He has never regarded us with contempt. He has paid us the intolerable compliment of loving us, in the deepest, most tragic, most inexorable sense.

If that was too much to swallow, let me simply take two lines out of it for easier consumption:

“We want, in fact, not so much a Father in Heaven as a grandfather in heaven—a senile benevolence.”

“It is for people whom we care nothing about that we demand happiness on any terms.”

My second quote comes from a collection of his essays, God in the Dock (Eerdmans, 1970). The fourth chapter in that book is “Answers to Questions on Christianity”. The Q&A session was held on April 18, 1944 at Electric and Musical Industries Ltd., (EMI) in Hayes, Middlesex.

Obviously taking place in the midst of World War II, one of the factory workers asked him this question: “Christians are taught to love their neighbours. How, therefore, can they justify their attitude of supporting the war?” This is the reply Lewis gave:

You are told to love your neighbour as yourself. How do you love yourself? When I look into my own mind, I find that I do not love myself by thinking myself a dear old chap or having affectionate feelings. I do not think that I love myself because I am particularly good, but just because I am myself and quite apart from my character. I might detest something which I have done. Nevertheless, I do not cease to love myself. In other words, that definite distinction that Christians make between hating sin and loving the sinner is one that you have been making in your own case since you were born. You dislike what you have done, but you don’t cease to love yourself. You may even think that you ought to be hanged. You may even think that you ought to go to the Police and own up and be hanged. Love is not affectionate feeling, but a steady wish for the loved person’s ultimate good as far as it can be obtained. It seems to me, therefore, that when the worst comes to the worst, if you cannot restrain a man by any method except by trying to kill him, then a Christian must do that. That is my answer. But I may be wrong. It is very difficult to answer, of course.

Again, that is a solid mouthful, so let me highlight just one sentence:

“Love is not affectionate feeling, but a steady wish for the loved person’s ultimate good as far as it can be obtained.”

In these two lengthy quotes alone, we have far more hard-headed realism and biblical orthodoxy than what we find in thousands of contemporary sermons, pop music videos, and public discussions about the matter. His first quote looks at divine love, and the second quote looks at human love – or what it is supposed to be.

Between the two we have some solid Christian meat to chew on. If Christians would read, meditate and consider carefully these two quotes, they could be set free from a dozen errors about love, and a dozen false notions about what biblical Christianity is all about.