I just finished saying elsewhere that I have written three articles on the controversial conservative, homosexual firebrand Milo Yiannopoulos thus far, and I don’t intend on doing any more. OK, so I have had a change of heart. The main reason I write again is simply for a very Christian reason: I have been thinking a lot about the guy lately and praying for him a lot as well. And with new hard times hitting him in a big way, I feel even more constrained to keep praying for him.

You see, a video of his recently was posted online in which he seems to joke about having sex with minors, etc. He of course has since come out and strongly denied that he in any way supports paedophilia. But whatever the actual truth may be, the damage has already been done. 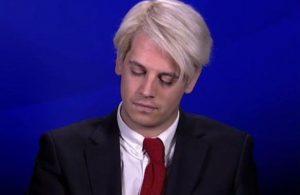 Just in the past day or so some really major repercussions have occurred. He was due to be a major speaker at the annual Conservative Political Action Conference, to be held over the next four days in Washington D.C. But he has just been disinvited because of the controversy over the paedophilia remarks.

They were not impressed with his self-defence on this, and said: “We continue to believe that CPAC is a constructive forum for controversies and disagreements among conservatives, however there is no disagreement among our attendees on the evils of sexual abuse of children.”

You can no longer see his book on Amazon (I just looked), and what comes of the book is now a moot point. He did get a $250,000 advance payment for his memoirs from S&S. Whether he turns to another publisher or tries something else, I do not know. But that has gotta hurt as well.

So with CPAC disinviting Milo, and his new book deal falling through, I would imagine that these would be real hard times indeed for the guy. Thus I am praying that because of these and other things, he will be touched by God, see his need of Christ, and become a new person through faith in Christ. I want you to join with me in such a prayer.

I always think about such people who are so clever, so talented, so artistic, so gifted, and so on, who do not know the Lord. All these great gifts from God are not being used to the full until a person surrenders to Jesus Christ. Yes he is very sharp and articulate and quick-witted and funny. But more important than that is for him to bow the knee to the Lord of the Universe, and acknowledge where these giftings have come from, and use them for Christ and the Kingdom.

Now, I am a Protestant and I generally write with other Protestants in mind. But I get surprised now and then when Catholics take umbrage at what I say. For example, on the social media I posted about the need to pray for Milo and his salvation.

One concerned Catholic said that Milo considers himself to be Catholic, that she quite likes him, and that is all there is to it. I did reply with the following words:

It has always been my policy here not to allow Cath-Prot bashes. Having said that (and this is after all my page), it does not mean a hill of beans if one is a Protestant, a Catholic, an Orthodox, or whatever. As the old saying goes, being in a church no more makes you a Christian than being in a garage makes you a car. Real faith is far more than some verbal assent.
What does matter is having a saving relationship with Jesus Christ through faith and repentance based on the finished work of Christ. Jesus said we could assess people by their fruit, and genuine fruit of a life-changing encounter with Jesus Christ is not something I find in the foul-mouthed, arrogant homosexual Milo. But I do care about him greatly and will keep praying for him that he does indeed find new life in Christ.

So it is not my intent to upset Catholics here, but there is nothing amiss at all in praying for Milo. Sure, at the end of the day, only God fully knows the human heart, and only he knows for sure if a person is genuinely a child of God. But I will keep praying that God does a deep work in his life.

Having said all that, since we are also on the broader topic of Milo, homosexuality, conservatism and the like, let me briefly draw your attention to three new articles on all this. I will quote from a bit of each.

The first is by Michael Brown: https://stream.org/milo-cpac-homosexuality-and-pedophilia/

It was an error for CPAC to invite Milo to keynote, despite his rhetorical brilliance and his ability to dismantle and expose today’s ridiculous PC extremes.
It’s one thing for Milo to speak on college campuses and other settings, where he can also be himself, including using his full range of profanity, vulgarity, and gay flaunting. It’s another thing for CPAC to celebrate an out and proud homosexual as one of its champions (after all, that’s part of being a keynote speaker at a conference of this kind; you are invited because of your leadership and your voice).
I gladly interviewed Milo on my radio show and would gladly do so again, but I would not invite him to be the graduation speaker at my organization’s school of ministry. And while CPAC is a political organization rather than a religious one, if it fails to hold the line on gay activism, it will cease to be truly conservative.

The second is by Matt Walsh: http://www.theblaze.com/contributions/matt-walsh-dear-conservatives-we-need-to-defend-principles-not-personalities/

As far as Milo is concerned, he’s obviously a disturbed person with a troubled past. Part of his child abuse advocacy stems from him attempting to rationalize his own abuse. I pray he gets the help he needs. But in the meantime, he is not equipped nor qualified to be a spokesman for the conservative cause. He never was. He was always a spokesman for his own cause, his own cult, and even before his foray into pederasty-promoting, his cult never had very much to do with anything resembling conservatism. Sure, he believes in free speech, I guess, but that’s the easy part. The more crucial point is what we do with that speech. As conservatives, our goal is to use our free speech to promote the cause of truth — especially moral truth. Milo was never an effective advocate in that regard, and never really tried to be.
I hope this whole thing will serve as a lesson for the sorts of “conservatives” who easily fall into cults of personalities. Conservatism is a set of principles, not a stable of personalities. Or, at least, it used to be.

The third is by David French: http://www.nationalreview.com/article/445079/milo-yiannopoulos-bad-poster-boy-conservative-free-speech-rights

Let’s put this plainly: If Milo’s the poster boy for free speech, then free speech will lose. He’s the perfect foil for social-justice warriors, a living symbol of everything they fight against. His very existence and prominence feed the deception that modern political correctness is the firewall against the worst forms of bigotry.
I’ve spent a career defending free speech in court, and I’ve never defended a “conservative” like Milo. His isn’t the true face of the battle for American free-speech rights. That face belongs to Barronelle Stutzman, the florist in Washington whom the Left is trying to financially ruin because she refused to use her artistic talents to celebrate a gay marriage. It belongs to Kelvin Cochran, the Atlanta fire chief who was fired for publishing and sharing with a few colleagues a book he wrote that expressed orthodox Christian views of sex and marriage.
Stutzman and Cochran demonstrate that intolerance and censorship strike not just at people on the fringe – people like Milo – but rather at the best and most reasonable citizens of these United States. They’re proof that social-justice warriors seek not equality and inclusion but control and domination.
Milo has the same free-speech rights as any other American. He can and should be able to troll to his heart’s content without fear of government censorship or private riot. But by elevating him even higher, CPAC would have made a serious mistake. CPAC’s invitation told the world that supporting conservative free speech means supporting Milo. If there’s a more effective way to vindicate the social-justice Left, I can’t imagine it.

All three are quite good articles. In the meantime, with all these heavy duty things befalling Milo at the moment, I am praying that he will somehow have an encounter with the living God. I pray that he sees his need of a Saviour, repents, and becomes a child of God through faith in Jesus Christ. Please join with me in that prayer.

19 Replies to “I am Praying for Milo”