Free speech is regarded as being inimical to fascism, and rightly so. And leftists routinely claim that they are the enemies of fascism and the champions of free speech. But as we see over and over again of late, it is the radical left which is most in bed with fascism, regularly preventing freedom of speech from taking place if it is deemed to be ideologically and politically incorrect.

We have just witnessed this again as fires are erupting, protestors are rioting, and police are seeking to deal with all this at an American college campus. I refer to the militant left’s attack on a Milo Yiannopoulos speaking event at the University of California, Berkeley. But let me back up a half a century to provide some much needed context. 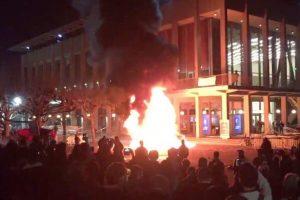 The radical sixties and freedom of speech

There were many idealists, utopians and those with romantic visions of a better, fairer life who made up the cultural and political revolution of the 60s in the West. I know, since I was one of them. Although I was only a high school kid at the time, I fully embraced the hippy revolution and New Left political activism.

The university town of Madison, Wisconsin – which was only a few hours away from where I lived – was one major hot spot of the 60s radicalism. I would regularly skip school and hitch hike there to take part in the action. The hippie movement, radical leftist political action, and the dope and rock scene were all happening there big time.

Another key centre of the revolution was of course Berkeley, California. It was there in the mid-60s that the Free Speech Movement was birthed. Radicals, led by student militants such as Mario Savio and Jack Weinberg, marched, protested and rioted against “the System” at the University of California, Berkeley campus.

They spoke of, and demanded, seemingly innocuous things like free speech and academic freedom. But the New Left was simply the latest manifestation of Marxism, and student turmoil and revolution became the vanguard for the Old Left and the ongoing Communist designs on the West.

Savio, who joined the socialist party, famously said in a speech late in 1964:

Students held sit-ins, teach-ins, love-ins and marches; leftist musicians like Joan Baez serenaded the protestors; and “freedom classes” were held. No political topic was to be off limits the radicals demanded, and complete freedom to say anything you wanted was upheld as a non-negotiable demand.

There were recurring mass marches and mass sit-ins, confrontations with the police, and mass arrests. But in the end the radicals won, and the Free Speech Movement was lionised and celebrated as some great liberating force. And it was emulated on numerous other American college campuses as well. Those were certainly some pretty heady days alright.

I say all this to highlight a mindboggling contrast. Just yesterday the Berkeley campus was again filled with angry students, mass protests, and confrontations with the police. With rioting and fires alight, free speech was again at the centre of all this – but this time what we actually had was a protest AGAINST free speech.

You see, the leftist activists were doing all they could to PREVENT freedom of speech. They definitely did not want all points of views heard, and they wanted to shut down and shout done any dissenting opinions. Let me offer a few details about the Berkeley situation.

Conservative firebrand and Senior Editor of Breitbart News Milo Yiannopoulos was due to speak at the campus Wednesday evening but rioting leftists forced the cancelation of the event. In a major slap in the face to the claims of the free speech activists some 50 years ago, the leftists at Berkeley this week made it clear that some people – and some opinions – are far less equal than others.

One report put it this way:

Milo’s event at UC Berkeley was cancelled and the venue evacuated over an hour before it was scheduled to begin, after masked left-wing protesters stormed the venue, overturning police barricades and lighting fires. The event devolved rapidly after the arrival of a large number of black-masked protesters, who immediately stormed the venue’s barricades, threw fireworks towards police officers, and lit fires.

Milo said this about the situation:

I have been evacuated from the UC Berkeley campus after violent left-wing protestors tore down barricades, lit fires, threw rocks and Roman candles at the windows and breached the ground floor of the building. My team and I are safe. But the event has been cancelled. I’ll let you know more when the facts become clear. One thing we do know for sure: the Left is absolutely terrified of free speech and will do literally anything to shut it down.

And this is not just some one-off. The radicals have already come out saying ‘you ain’t see nuthin’ yet’. For example, consider this:

Hollywood director, writer, and producer Judd Apatow warned conservatives on Twitter that last night’s riot at UC Berkeley was “just the beginning,” adding: “When will all the fools who are still supporting Trump realize what is at stake?”

All this is no small affair, and has even made the new US President stand up and take notice – and offer a no-nonsense response:

President Donald Trump appears to have threatened to pull federal funding from the University of California, Berkeley after the campus experienced violent protests over a planned speech from conservative provocateur Milo Yiannopoulos.
“If U.C. Berkeley does not allow free speech and practices violence on innocent people with a different point of view – NO FEDERAL FUNDS?,” Trump wrote on Twitter Thursday morning. UC Berkeley received $370 million in federal research funding in 2015-2016, according to the university’s website.

The incredible thing is we are witnessing the reality of the left in action. Beyond the rhetoric and the sloganeering, the radical left is really about fascism, censorship and the end of free speech. They will not tolerate other points of view, and they will do whatever it takes to ensure that all recalcitrants such as Milo will not be given a hearing.

The secular leftists are so proud of calling themselves “progressives” but the ugly truth is this: there is nothing progressive about this mob – and a mob is what they are. They are regressive: they want to take us back to the censorship, conformity, and uniformity of past fascist tyrannies.

They have no regard for all that they constantly shout about: tolerance, diversity, acceptance, love and freedom. They are every bit the fascists that they claim to reject and despise. I myself have been at the receiving end of such mobs, being forced to run police gauntlets to get into a meeting to give a speech.

This is becoming routine for anyone whom the left deem to be subversives and deplorables. And it is getting worse by the day. Free speech is under direct assault by the militant leftists, and unless we do all we can to hang on to it and defend it, we will soon enough lose it all.

What has just happened at Berkeley should serve as a much needed wake-up call to all of us. And the irony of the situation should not be lost on us. As Todd Starnes has just rightly pointed out, “The birthplace of the free speech movement has become its graveyard.”

I am reminded of a quip Bill Buckley made many decades ago about the left: “Liberals claim to want to give a hearing to other views, but then are shocked and offended to discover that there are other views.”

Or as Mark Steyn put it more recently: “The Left does not want to win the debate, it wants to shut down the debate.”

7 Replies to “Free Speech, Fascism, and the Left”