I am told that the words “Whom the gods would destroy, they first make mad” is a phrase spoken by Prometheus  in Henry Wadsworth Longfellow’s 1875 poem, “The Masque of Pandora”. They seem to be a pretty apt description of life in the West in the 21st Century.

The Bible does give us something rather similar. As we find in Deuteronomy 28:28: “The Lord will afflict you with madness, blindness and confusion of mind.” Of course there is a particular context to this passage. Deut. 28 contains a list of blessings for obedience and curses for disobedience for Yahweh’s covenant people Israel.

While the verse therefore primarily applies to ancient Israel, I think we can take a generic application for today as well. Certainly we see everywhere – primarily at the hands of the radical secular left – confusion, madness and blindness.

And it is a clear case of Isaiah 5:20: “Woe to those who call evil good and good evil, who put darkness for light and light for darkness, who put bitter for sweet and sweet for bitter.” The Apostle Paul tells us similar things in Romans 1:18-32. 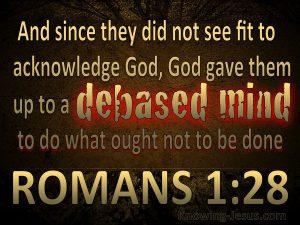 There he speaks of those who seek to defy God and rebel against him. Homosexuality is listed as a primary example of this. Paul then says in verses 28-29, “just as they did not think it worthwhile to retain the knowledge of God, so God gave them over to a depraved mind, so that they do what ought not to be done. They have become filled with every kind of wickedness, evil, greed and depravity.”

Depravity and confusion of mind, moral blindness and madness – these are the hallmarks of a people who have been given over by God because of their immorality, rebellion and disobedience. And this best explains what we see happening in the sex wars.

In the 60s we had the radical feminist and homosexual revolutions, and all that nicely prepared the way for the radical transgender ideology being forced on us today. And talk about madness and confusion. When adults actually tell you that a person’s sex is simply a matter of preference and whim, and has nothing to do with our DNA, our anatomy, our biology, and with reality, then you know these people have gone full-on nutzo.

They have come to “believe a lie” as Paul also warns about (see 2 Thessalonians 2:11). Indeed, the madness of the trans activists is a direct result of rejecting God and his good and perfect design for us, including what it is to be a human being of either male or female sex.

This is rebellion against the created order and against the Creator. These militants are shaking their fists at God and telling him they will have none of his good and gracious plans for us, but they will rebel against it all, and listen instead to the father of lies (as Jesus describes the devil in John 8:44).

Rebellious autonomy, immorality and a disordered mind always go together. So when we see the activists telling us there are 50 or 100 or 200 genders, they are not just pushing a radical progressive agenda, they are actually pushing Satan’s agenda.

This is ultimately a spiritual war in other words. Sure, it is also a political, social, cultural and ideological war, so it needs to be fought on every level. We must be engaged in the war of ideas, the political debates, and the legislative fights, but we must also be involved in spiritual warfare to properly deal with all this.

Let me look a bit more at the passages we have been discussing, especially Romans 1. Theologians speak about “judicial abandonment”. By that they mean there comes a time when human wickedness and rebellion becomes so great that God simply abandons people to their sin and unbelief.

And it sure does not look pretty when that occurs. Let me cite a few authorities on this. In his expository commentary on Romans, Martyn Lloyd-Jones says this about the frightening process:

When mankind refuses to glorify God as God, when mankind does not thank Him and address Him and worship Him as it ought, and when, in its cleverness, it dismisses or throws Him out, what God does is to do exactly the same to mankind. There is a play on words in this twenty-eighth verse: “Even as they did not like to retain God in their knowledge”. God did not like to retain them – He gave them up, left them to themselves. They abandoned God, God abandoned them. That is what Paul is saying.
In other words, what we have here is an account of God’s judicial abandonment of man in sin. And you notice that He even abandoned them in their minds, which is the most terrifying and terrible thing of all. . . . The tragedy of man in the world is not only that he is debased in his conduct, he is debased in his mind. He cannot think straight. That is why he tries to justify these vile things, and tries to explain them in terms of biology or psychology and so on. . . . And when a man’s mind has become reprobate, there is no hope for him, there is nothing to appeal to!

These are very shocking and confronting words. But they reflect a very real truth: persistent sin and rebellion will take you on a one-way road to perdition, and will result in all sorts of madness and depravity along the way. The gender bender agenda is just a part of this. And sadly it will simply get worse, unless things change big time in the West.

Let me finish on a pastoral note. We as Christians must do two things here: we must show compassion and respect for those caught up in gender confusion, especially our young people, and point them to good counsel and help. But at the same time we must resolutely resist the ideologues and militants who are so aggressively pushing all this.

As Peter LaBarbara once put it concerning a related issue: “Homosexuality is at its core a war of defiance against Nature and Nature’s God. Still, as Christians we must offer practicing homosexuals forgiveness through the Gospel of Jesus Christ. As Jesus said, ‘Repent and believe the good news!’ (Mark 1:15).”

And in his brief book Transgender, Vaughan Roberts speaks to this two-fold approach as well:

We will never give in to a “yuk” reaction, because they are beautiful and precious creatures made in God’s image. But neither will we give way to the false notion that “they were made that way”. We are created but fallen. We are made but marred. And those who experience gender dysphoria, along with all of us, are both victims of the fall, and therefore to be sympathized with, and also, to some degree, sinners with disordered hearts who need to be both forgiven and rescued.

To properly engage here as God’s people, as Michael Brown often puts it, “we need hearts that are broken and backbones of steel.”

8 Replies to “Trans Sanity: Perversion, Confusion and a Depraved Mind”