Stockholm, Sweden: the latest Western location to experience firsthand the religion of peace at work. This time, another truck attack, killing and wounding many. The terrorist attack has only just occurred hours ago, but now we are learning more details about it.

Thus far there are four dead and fifteen injured after a stolen beer truck ploughed through crowds in the busiest street of central Stockholm on Friday afternoon, ending up rammed into a busy department store. One Australian man who was there at the time described the carnage as follows:

I turned around and saw a big truck coming towards me. It swerved from side to side. It didn’t look out of control, it was trying to hit people. It hit people, it was terrible. It hit a pram with a kid in it, demolished it. It took a long time for police to get here. I suppose from their view it was quick, but it felt like forever. 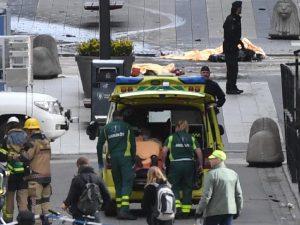 Other descriptions of the mayhem are now coming in:

A man named Dimitris said two people were run over in the chaos. “I went to the main street when a big truck came out of nowhere,” he said. “I could not see if anyone was driving it but it got out of control. I saw at least two being run over. I ran as fast as I could.” The usually busy pedestrian mall has been locked down by police and citizens have been urged to avoid the area.
Stockholm locals have posted confronting images and videos on social media, some that show streets smeared with blood and strewn with covered bodies covered. Swedish broadcaster SVT said shots were fired at the scene and the Swedish news agency TT said several people were rushed away in ambulances. Thick smoke could be seen on the streets, while video showed an area blocked off by police and crowds gathering around the police cordon, according to AFP.

Television footage showed hundreds of shoppers and office workers fleeing the scene after the lorry careered down the pedestrian precinct, killing a dog and crushing flower pots and litter bins as it went. “We stood inside a shoe store and heard something??… and then people started to scream. I looked out of the store and saw a big truck,” Jan Granroth told Aftonbladet.
Another witness said: “When I came out I saw a lorry standing there, with smoke coming from it, and there were loads of bits of cars and broken flower pots along the street.” Annevi Petersson, a photographer, ran out from a store when she heard screaming coming from outside. “I saw a woman had a partly severed foot. People screaming in panic, others ran. I saw people laying bloody on the street and got out of there.”

The Swedish Prime Minister Stefan Lofven made it clear what this was all about: “Sweden has been attacked. Everything points to the fact that this is a terrorist attack.” That Islam was again involved has now been confirmed. As one news item reports:

One man was arrested in connection with the attack but the driver remained at large, police said. According to the Aftonbladet newspaper, the arrested man is a 39-year-old of Uzbek origin and a supporter of the Islamic State (IS) group.
The man, who was captured in the northern Stockholm suburb of Marsta close to the city’s international airport, has some light injuries. According to Aftonbladet, the man confessed to involvement in the horror attack in the city’s biggest pedestrian street, above ground from Stockholm’s central subway station.

There is nothing surprising here. This is now just standard fare. There have been 30,587 deadly Islamic terror attacks since the 9/11 jihad attack in America. In March 2017 there were 154 such attacks in 23 countries killing 1106 people and injuring 1324 others.

Yet Europe, like most of the West, keeps living in denial about the real nature of the political ideology known as Islam. Indeed, most news reports on the Stockholm attack are still either downplaying or ignoring altogether the Islamic element. Just don’t mention the “M” word.

That has been typical mainstream media practice for quite some time now. Those who fail to identify and take seriously the enemy will always be at the mercy of that enemy. On a daily basis now we see this being played out around the Western world.

Those who are brave enough to speak the truth about Islam are singled out as haters, racists, Islamophobes and bigots. But how many more innocent men, women and children must be mowed down on Western streets before we get real about this clear and present danger?

Sadly Sweden has long been a prime example of a nation unwilling to face reality, despite all the evidence to the contrary. It has become a leading dhimmi nation, and a piece written just a week ago nicely summarises the Islamic problem in Sweden:

Sweden has succumbed to dhimmitude. Muslim migrants raping infidel women is becoming the norm, while eating bacon too close to Muslims can land you in court. It was bad enough that Sweden is the rape capital of the West and that Islamic enclaves and no-go zones terrify police so much that 80 percent of them are considering quitting their jobs. But now, a Swedish man is facing prosecution for eating bacon too close to Muslim women. Although he allegedly was behaving provocatively by following the women with the bacon, his deeds do not justify him being rounded up like a criminal and prosecuted when crimes are being committed by Muslims all over Sweden with impunity. Those crimes will become more common, because the West has been slowly surrendering over time to Sharia.

And lest my Australian readers think all this cannot happen here, we have this sobering headline also found in today’s press: “Possible terror link in deadly NSW service station attack”. The story opens:

The NSW Police Joint Counter Terrorism Unit has joined the investigation into a fatal stabbing and violent spree across Queanbeyan and Canberra overnight. Two teenage boys were arrested this morning after allegedly going on a rampage that left one man dead and another seriously injured. NSW Police confirmed the counter-terrorism unit was investigating on Friday.
Deputy Commissioner Catherine Burn said physical evidence at the service station led to NSW Joint Counter Terrorism Team (JCTT) being brought into the investigation. “It appears at this stage that there may be links to a modus operandi that we would suggest is indicative of a terrorist attack, inspired or otherwise.”

If that still seems a bit vague to you, consider this from another news report: “Teenager charged with fatally stabbing service station worker in an ‘ISIS-inspired attack’ shouted ‘Allahu Akbar’ after his arrest. . . . Deputy NSW Police Commissioner Catherine Burn declined to confirm reports the letters ‘IS’ were found written in blood at the Caltex service station.”

12 Replies to “Stockholm: Another Day, Another Jihad Attack”