Micaiah continued, “Therefore hear the word of the Lord: I saw the Lord sitting on his throne with all the multitudes of heaven standing around him on his right and on his left. And the Lord said, ‘Who will entice Ahab into attacking Ramoth Gilead and going to his death there?’ One suggested this, and another that. Finally, a spirit came forward, stood before the Lord and said, ‘I will entice him.’ ‘By what means?’ the Lord asked. ‘I will go out and be a deceiving spirit in the mouths of all his prophets,’ he said. ‘You will succeed in enticing him,’ said the Lord. ‘Go and do it.’ So now the Lord has put a deceiving spirit in the mouths of all these prophets of yours. The Lord has decreed disaster for you.” Then Zedekiah son of Kenaanah went up and slapped Micaiah in the face. “Which way did the spirit from the Lord go when he went from me to speak to you?” he asked. Micaiah replied, “You will find out on the day you go to hide in an inner room.”

What we have here is a lying or deceiving spirit from God. The obvious problem has to do with God’s character. We are told repeatedly in Scripture that God is a God of truth – a God who cannot lie. So how can this be? The short answer is this: God gives sinners over to their sin and hardened hearts. 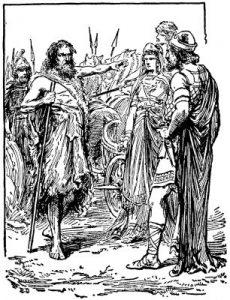 The case of Pharaoh in the book of Exodus is a clear example of this, and we see Paul discussing sinners being “given over” by God in Romans 1. A sovereign God can use secondary means to achieve his purposes, including confirming sinners in their rebellion, obstinacy and sin.

But let me unpack all this a bit more. We all know what an incredibly evil king of Israel Ahab was. His sad story is recounted in 1 Kings 16-22. As we read in 21:25: “There was never anyone like Ahab, who sold himself to do evil in the eyes of the Lord”. In chapter 21 he is told by Elijah that he will die because of his evil ways.

A minor and half-hearted repentance by the king as recorded at the end of the chapter simply delays his death. It is sealed in chapter 22. There we find Micaiah prophesying against Ahab. False prophets had promised the king victory as he goes to fight against Ramoth Gilead.

It is in this context that we read about the deceiving spirit. The 400 false prophets had received the lying spirit. The Old Testament (like the New) stresses the sovereignty of God and shows how God can use secondary means to achieve his purposes.

In this case the hardness of Ahab’s heart was confirmed, and the death promised by Elijah is carried out. God used the lying counsel of the false prophets to achieve his ends. As John Olley comments: “What Ahab has been hearing from the others is a deceiving spirit, to entice Ahab (vv. 20-23). Unknowingly the prophets are giving the only message that Ahab is willing to hear, so enticing him into battle.”

Or as Donald Wiseman puts it:

The Lord in truth decrees not only good but evil (v. 23, disaster; Isa. 45:7). The prediction of Ahab’s end had already been made by Elijah, and this use of false prophecy would emphasize that God controls everything including the final judgment on unbelief. God had given Ahab up (cf. Rom. 1:24-28) yet still was giving an opportunity for him to use his freewill and repent. Ahab’s delusion can but lead on to his further backsliding and destruction and so reproves him (Je. 2:19).

Lissa Wray Beal has an extended discussion on this in her commentary and is well worth quoting from. She reminds us that this is not the first case of God allowing people to head to their own destruction:

Other instances can be cited in which YHWH causes an action to be taken that results in the individual’s downfall or destruction: Eli’s sons reject their father’s advice (1 Sam. 2:25b), Absalom rejects Ahithophel’s advice (2 Sam 17:14), Rehoboam takes foolish advice (1 Kgs 12;15), Amaziah chooses to go to war (2 Chr. 25:20). In each case the one deceived has already shown some propensity against YHWH and his purposes. The outcome of YHWH’s action is judgment against the individual.

God can and does allow spiritual blindness to take place, as we read about in Ezekiel 14:1-9, and he can even use an evil spirit to accomplish his purposes, as we find in Judges 9:22-24. She continues with her discussion of the evil king:

This is certainly the case with Ahab. YHWH has already predetermined judgment against him (21:17–26) and, although Ahab repents (21:27–29), judgment is not commuted but delayed. Ahab had repeatedly shown himself intractable against YHWH. . . . Given YHWH’s ordained judgment against Ahab, and Ahab’s entrenched disobedience, the deception plays upon Ahab’s disobedience and facilitates the judgment.

She reminds us of Psalm 18:26-27 which says of God, “with the perverse you show yourself crafty,” and continues:

YHWH acts toward people according to their own propensity, and those who oppose him he opposes. The deception plays out to their judgment and sin is called to account. There is no loss to YHWH’s truthfulness in such actions….
Upholding YHWH’s truthfulness in these contexts does not conflict with upholding YHW’s prerogative to act with sleight and deception against confirmed sinners. Set upon a path of destruction by their own waywardness, their response to YHWH’s deception simply confirms their waywardness. They are hoist upon their own petard, and brought to judgment.

And all this is not just the domain of the Old Testament. We have already mentioned Romans 1 several times, and another key Pauline passage which deserves mention here is 2 Thessalonians 2:9-12:

Here we see the same principle in operation. As people harden their hearts through sin, rebellion and disobedience, God abandons them to their evil ways. And he can even use secondary actors including the devil himself to confirm people in their downward trajectories.

So we have this pattern seen throughout Scripture. God is patient and merciful and extends offers of forgiveness if the wicked will turn from their ways. He even did this to the hyper-evil Ahab. But when sinners become set in their evil, God simply affirms and confirms their lifetime of bad decisions. God then gives them over.

This is a salutary lesson that all of us must pay careful attention to. As the writer to the book of Hebrews puts it, “Encourage yourselves daily while it is still today, so that none of you may grow hardened by the deceit of sin” (Heb. 3:12).