One of the most vital doctrines of the Christian faith, yet admittedly one of the most mysterious, is the doctrine of the Trinity. The Triune God who is one God is at the very centre of Christian teaching. Take away the Trinity and you take away biblical Christianity.

Of course there has been plenty of discussion about this doctrine over the past 2000 years, and there still is much discussion and debate. We are still trying to fully get our heads around it. But we do have a rough understanding which very much faithfully respects all the biblical data on this. The orthodox formulation of the doctrine in a very simple format goes something like this: 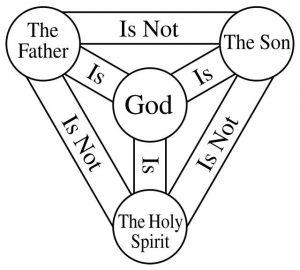 God is one God in three persons. God has one essence or substance but has three persons. We can say that there is one what, but three whos. There is one it but three I’s. In the biblical understanding of the Trinity five crucial assertions are being made:

Each one of these points can be elaborated upon at length. And all five have clear biblical support. How we are to understand all this has been the stuff of 2000 years of careful reflection, thought and discussion. Entire libraries exist on this grand topic. See the bibliography below for just a few recent helpful volumes on this.

One major theological discussion about the Trinity has centered on the relationship between the persons, both before and after creation. Sometimes the discussion is featured in terms of the immanent or ontological Trinity and the economic Trinity:

-Immanent or Ontological Trinity. The Trinity in itself; the Trinity as it exists in eternity. Ontology as to do with being, and each person of the Trinity is fully equal to the other. In terms of nature and being, there is complete equality among the three persons of the Godhead.

Here I want to speak a bit more to the idea that there are roles and hierarchy in the Trinity, or even subordinationism, properly understood. Any such hierarchy is not about one person being less divine than the other. All three persons are fully God, and none is greater or lesser in terms of being or nature.

But there may be different roles or operations each one plays. As with all things theological, especially when God is the main topic of discussion, there is a high degree of complexity and nuance here. Plenty of thought and discussion about these matters have occurred over the centuries, and disagreement exists on various aspects of this debate.

But let me lay out in very simple form, and in an introductory fashion, what I mean to say about these things. Consider the language of ‘being sent’. We are told that the Father sends the Son (1 John 4:10), although we are never told the Son sends the Father.

The western church taught that the Spirit proceeds from the Father ‘and from the Son’. The eastern church rejected those last words, known as the filioque clause (from the Latin term filioque: “and the son”). The divisions were so deep that it led to the Eastern Orthodox Churches splitting away from the West in 1054.

That debate in itself has already filled libraries with theological discussion both pro and con. My point here is that there seem to be some activities or roles that may be specific to individual persons within the Trinity. As one theologian puts it, “Each person has different roles within the Godhead, and each has different roles in relationship to the world (some roles overlap).”

The former is what we call a functional subordination. But there is no subordination in terms of status or essence: Father and Son are both fully divine. Thus the former point would be expressed in passages like John 14:28 (“My Father is greater than I”), while the latter would be seen in verses like John 10:30 (“I and my Father are one”).

Similar issues emerge when we speak of the ‘generation of the Son’. The complicated yet orthodox way of speaking about this is to say that Jesus is begotten but not made. As the so-called Athanasian Creed puts it:

The Father is made of none, neither created nor begotten. The Son is of the Father alone; not made nor created, but begotten. The Holy Spirit is of the Father and of the Son; neither made, nor created, nor begotten, but proceeding. So there is one Father, not three Fathers; one Son, not three Sons; one Holy Spirit, not three Holy Spirits. And in this Trinity none is afore, nor after another; none is greater, or less than another. But the whole three persons are co-eternal, and co-equal. So that in all things, as aforesaid, the Unity in Trinity and the Trinity in Unity is to be worshipped.

Many other questions arise here. But the point to keep stressing is that each of the three persons in the Godhead are fully equal to one another, and are all God, yet there is a sense in which there are differences of activity, of role, of operation.

This in part explains how we can make sense of the biblical idea that the Son somehow received the wrath of God at Calvary. Because the Son is distinct from the other two members of the Trinity, one can speak about one member ‘doing things’ to, or on, other members (such as the Father sending the Son, or pouring out his cup of wrath upon him, etc).

If all this has just created more questions for you, well, how can a topic like God not create questions? It is good to think and reflect about such matters. The Trinity is admittedly a mystery, and yet it is a biblical doctrine which does the best justice to the self-revelation of God and all the biblical data.

Thinking about God and who he is and what he does will never be exhausted by mere mortals. But believers are called to love God with the totality of their being, and that includes their minds. Carefully and prayerfully reflecting on the wealth of biblical material is something all believers should be engaged in.

I mentioned above a five-fold outline of what the doctrine of the Trinity entails. Let me finish with a similar six-fold one offered by Australian theologian Michael Bird. He summarises the “critical and salient features of Trinitarian belief” as follows:

Recommended reading on the Trinity

In addition, see the relevant chapters in the various systematic theologies.

17 Replies to “Thinking About the Trinity”