As stated in my first article on this topic, there are heaps of spiritual truths that can be found in the accounts of the kings of Judah. Vital spiritual lessons can be gleaned from these stories, and we dare not miss all that can be learned from there.

In the past few days as I have read through these accounts I have been amazed by all the spiritual gold to be mined from these chapters. So let me offer more of these stories here and the many lessons to be learned.

-2 Chronicles 25 tells us about Amaziah and his half-hearted devotion to Yahweh. He gathered together a large army in Judah, but he also sought to hire “a hundred thousand fighting men from Israel for a hundred talents of silver” (v. 6). This was not the will of Yahweh and a man of God clearly told him so (vv. 7-8):

“Your Majesty, these troops from Israel must not march with you, for the Lord is not with Israel—not with any of the people of Ephraim. Even if you go and fight courageously in battle, God will overthrow you before the enemy, for God has the power to help or to overthrow.”

God can help or overthrow, depending on where his people and his leaders are at, spiritually speaking. But Amaziah had very carnal priorities, and asked about the money he had spent on these troops. The man of God replied (v. 9), “The Lord can give you much more than that.”

Money is no object for God, but getting the heart of his people is a much more difficult matter. God owns the cattle on a thousand hills (Psalm 50:10), but what is hard for him to achieve is getting his people, and especially their leaders, to have a heart and will fully committed to him.

-2 Chronicles 26 gives us the story of King Uzziah. At first he sought the Lord and did what was right in the eyes of the Lord. The key spiritual commentary is found in v. 5: “As long as he sought the Lord, God gave him success.” That is a spiritual principle we can always bank on. Thus “God helped him against the Philistines and against the Arabs” (v.7).

Sadly however – and as is so often the case with so many – these victories resulted in the king becoming proud and reckless. As verse 16 says, “But after Uzziah became powerful, his pride led to his downfall. He was unfaithful to the Lord his God, and entered the temple of the Lord to burn incense on the altar of incense.”

A group of priests rebuked the king, saying (v. 18), “Leave the sanctuary, for you have been unfaithful; and you will not be honored by the Lord God.” But instead of listening to them he becomes angry. The results are not good (v. 19): “While he was raging at the priests in their presence before the incense altar in the Lord’s temple, leprosy broke out on his forehead.”

It is never a good idea to argue with God, or with those he has sent. God always wins in such situations, and we always lose. But pride does that to people: it makes them take leave of their senses, and they always end up with the short end of the stick.

-2 Chronicles 27 tells us about King Jotham, a good king who followed the Lord. We read about his victory over a pagan king, and then we find this bit of theological commentary (v. 6), “Jotham grew powerful because he walked steadfastly before the Lord his God.”

Once again we see success tied in with covenant loyalty and faithfulness. Obedience and trust lead to God’s favour, while sin and disobedience always lead to trouble. This book is full of such stories, as we have already seen. And the lessons should be fairly obvious for Christians today.

-2 Chronicles 28 is the record of King Ahaz, an evil ruler. As we read in the opening verses:

Unlike David his father, he did not do what was right in the eyes of the Lord. He followed the ways of the kings of Israel and also made idols for worshiping the Baals. He burned sacrifices in the Valley of Ben Hinnom and sacrificed his children in the fire, engaging in the detestable practices of the nations the Lord had driven out before the Israelites. He offered sacrifices and burned incense at the high places, on the hilltops and under every spreading tree.

Of interest, a prophet of the Lord then rebukes the northern king for their tough treatment of the southerners. This is another spiritual principle we find running throughout Scripture. God may well raise up a people as an instrument of judgment on his own people (think of God using the Assyrians to judge Israel as in Isaiah 10), but he still holds these people accountable for what they have done.

Finally, we read about Ahaz becoming even more unfaithful, and he even offered sacrifices to pagan gods. But we get this spiritual commentary in v. 23: “But they were his downfall and the downfall of all Israel.” Yep, that is a sure fire way to fall flat on your face and live in defeat: trust in false gods instead of the true and living God. 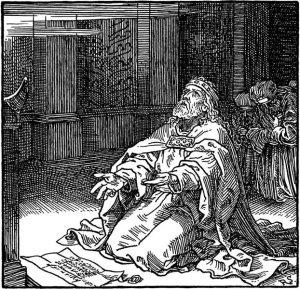 -2 Chronicles 32 offers us our final story, this time of King Hezekiah. Sennacherib king of Assyria has come and invaded Judah. The Assyrians were a fearful lot indeed, but the king stood strong in the Lord. As we read in vv. 6-8:

He appointed military officers over the people and assembled them before him in the square at the city gate and encouraged them with these words: “Be strong and courageous. Do not be afraid or discouraged because of the king of Assyria and the vast army with him, for there is a greater power with us than with him. With him is only the arm of flesh, but with us is the Lord our God to help us and to fight our battles.” And the people gained confidence from what Hezekiah the king of Judah said.

Those are marvellous words which every believer today needs to take to heart when facing insurmountable challenges, deadly enemies, or fierce opposition. Sennacherib then spoke out even more terrifying words. Instead of running in fear, we read these amazing words in verses 20-22:

King Hezekiah and the prophet Isaiah son of Amoz cried out in prayer to heaven about this. And the Lord sent an angel, who annihilated all the fighting men and the commanders and officers in the camp of the Assyrian king. So he withdrew to his own land in disgrace. And when he went into the temple of his god, some of his sons, his own flesh and blood, cut him down with the sword. So the Lord saved Hezekiah and the people of Jerusalem from the hand of Sennacherib king of Assyria and from the hand of all others. He took care of them on every side.

Wow, what an incredible thing this must have been to behold. This was God at work, moving in a powerful and an unmistakable way. God is the same yesterday, today and forever. When we are in a real spot of trouble, what is our normal reaction? Do we try every human means possible to get out of trouble? Or do we do the only sensible thing there is, to call on the King of Kings and Lord of Lords?

Of course we know from the full teachings of Scripture that God may not always deliver his people from the bad situations they are in. But he gives grace nonetheless. I am reminded of the spiritual hall of fame in Hebrews 11 where we read about some great men of faith who “escaped the edge of the sword” (v. 34) while some other spiritual giants “were killed by the sword” (v. 37).

God was glorified in either case. But the general spiritual principles of victory coming from obedience and faith, and defeat coming because of sin and disobedience, remain valid for today. All Christians, and all Christian leaders, need to keep these vital spiritual truths in mind.

May our hearts be encouraged and our spirits fortified as we study these spiritual lessons, both here, and in my previous article: billmuehlenberg.com/2017/05/14/lessons-2-chronicles-2/

3 Replies to “More Lessons from 2 Chronicles”