In a genuine act of political terrorism and an actual despicable hate crime, a leftwing Trump-hater has just recently gone on a shooting spree, targeting Republican politicians practicing for a bi-partisan baseball game. As you know, five people have been injured, including House Majority Whip Steve Scalise who is now in critical condition.

The shooter had first asked if these were Republicans or Democrats. When told they were Republicans he soon thereafter opened fire. Thankfully he was killed by security forces before this turned into a full-scale massacre. The assailant was Illinois resident James T. Hodgkinson. 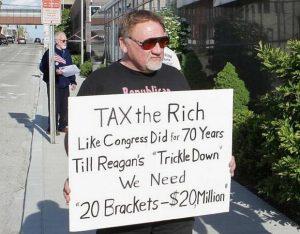 He was an out and proud leftist. His FB page (now taken down) was full of anti-Trump and anti-Republican posts. He campaigned for socialist presidential candidate Bernie Sanders. He also railed about the rich and the need to tax them out of existence.

Of course we will learn more about him in the days to come. But this is a clear case of political violence, and sensible voices are rightly asking how much the inflamed hate speech and rhetoric of the Left has contributed to this. We see this intolerant, violence-provoking mindset on full display on many American college campuses. Indeed, we have even had college professors calling for Republicans to be “lined up and shot”.

And the falsely-called antifa (anti-fascist) movement is one of the most fascist groups going. These leftist militants engage in violent demonstrations and seek to shut down any appearances or speaking engagements of conservatives. One write up about the group in a left-wing magazine puts it this way:

Anti-fascist, or antifa, doesn’t only delineate that which opposes fascism. It is a set of tactics and practices that have developed since the early 20th century (and the rise of fascism in Italy) as a confrontational response to fascist groups, rooted in militant left-wing and anarchist politics. As organizers from anti-fascist research and news site Antifa NYC told The Nation: “Antifa combines radical left-wing and anarchist politics, revulsion at racists, sexists, homophobes, anti-Semites, and Islamophobes, with the international anti-fascist culture of taking the streets and physically confronting the brownshirts of white supremacy, whoever they may be.” As with fascisms, not all anti-fascisms are the same, but the essential feature is that anti-fascism does not tolerate fascism; it would give it no platform for debate.

Indeed, how often do we find in the mainstream media and elsewhere the Left happily joking about all this, using all sorts of violence-filled “humour” and rhetoric to make their anti-Trump and anti-conservativism points? We have heard and seen far too many graphic examples of this of late.

The leftist comedian Kathy Griffin had her Trump severed head photoshoot explode on her thankfully. But she actually thought that this was so cute and funny, until all the negative feedback started to pour in. And we also had the taxpayer funded public theatre, the New York City “Shakespeare in the Park” group, with a rendition of Julius Caesar depicting Donald Trump being stabbed to death.

All sorts of lefty celebs have been frothing at the mouth, spewing out diabolical things against Trump and conservatives. Madonna for example said in an impassioned speech: “Yes I am angry. Yes, I am outraged. Yes, I have thought an awful lot about blowing up the White House.”

Leftist America rapper Snoop Dogg actually shoots a mock President Trump in his recent video “Lavender.” And another rapper, Everlast, shared these tolerant and loving lyrics with us: “F*ck that dude. I’ll smack that f*cker’s comb-over right off his f*cking scalp. Like, for real, if I met Donald Trump, I’d punch him in his f*cking face. And that’s not a joke.”

Just a day before the ballpark shooting David Simon of HBO quite openly urged anti-Trump lefties to commit actual violence, as he told them to “pick up a goddamn brick” if things don’t go their way. Hard-core left militant Dan Savage put it this way: “I wish [the Republicans] were all f*cking dead!” And just after the shooting took place a House Republican lawmaker, Rep. Claudia Tenney, R-New York, received an email with this subject line: “One down, 216 to go…”

There are just too many examples of this to recount here. Thankfully a new article offers twenty examples of leftist calls for violence in the Trump-era: www.wnd.com/2017/06/20-times-violence-threatened-used-in-wake-of-dems-political-collapse/

And another author has done a very similar list, also offering twenty cases of liberals calling for violence against conservatives: townhall.com/columnists/johnhawkins/2017/06/15/20-liberal-calls-for-violence-against-conservatives-in-quotes-n2341401

Looking at the leftist MSM website articles on this shooting is most revealing: many comments beneath the articles are praising the attack, with many ‘likes’ going their way. As just one example, this comment was found at the Huff Post: “What’s more harmful: Putting millions already on the margins more at-risk via draconian policies, or shooting a racist lawmaker in the hip?”

Um, might there be a connection between all this hate, rage, and calls to violence, and the actual violence we now see taking place? Only leftist political ideologues will claim there is no connection between the two. The left is fomenting a culture of hate and violence. This shooting is the bitter fruit of their bitter hatred.

Now, can conservatives at times engage in provocative and reckless rhetoric, even at times calling for violence against opponents on the left? Yes that can happen. But just bear this in mind: during eight years of Obama’s inflammatory reign, millions of American conservatives were routinely offended, vilified and outraged.

Indeed, imagine all the MSM outrage if conservatives did. But because this was a leftist shooting, we hear nothing about hate crimes and political violence. The MSM is reading off the same song sheet here: this was a lone wolf, and he has nothing to do with leftism, and there was no leftist provocation for all this.

Yeah right. I am not buying it for a moment. When the Left as a whole screams hate and calls for violence against conservatives on a daily basis, month in and month out, then of course we’re going to see militant leftists taking their advice and actually doing what so many of them would like to do as well, but don’t have the guts to carry out.

America right now is in a real bad way. With leftists freely and proudly spewing hate-filled rhetoric on a daily basis – including calls to violence – things will only get worse. God have mercy on America. Keep the country in your prayers please – it sure needs it.