I wish to make a few basic points about theology here. Theology is important, but like anything, we can get way off base with it. As is so often the case, avoiding unbiblical extremes is imperative. People can go in all sorts of directions when it comes to theology, and not all of them are helpful.

While I have written on these matters often before, there seems to be an ongoing need to keep discussing such things. So let me elaborate on all these points a bit further. And let me begin by making a confession: Often I actually choose NOT to write on certain hot potato theological topics simply because I know it will produce more grief than what it is worth. 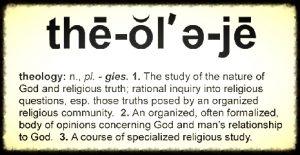 All sorts of unnecessary wars will break out, people will get all bent out of shape, and ugly, unedifying and unChristlike battles will erupt as a result. And there is no end of these theological topics that people can go to war over. Some of the bigger issues include things like the Calvinist-Arminian debate of course.

But there are plenty of much less important matters that Christians can fight to the death over, including worship styles, end times speculation, and whether believers can drink alcohol or have tattoos, etc. This is called majoring on minors and I have discussed it elsewhere, eg: billmuehlenberg.com/2014/09/21/the-madness-of-majoring-in-minors/

However, even on the really substantial theological debates, I still am wary of writing on them. I seek to explain why this is the case as I elaborate on the following ten theological theses:

One. Theology is very important. One cannot read the New Testament without seeing how much emphasis is given to sound doctrine, solid teaching and biblically-based beliefs. I have written often on this, so let me simply direct you to a few other articles of mine: billmuehlenberg.com/2006/09/26/in-defence-of-theology/

Two. As vitally important as theology and sound doctrine are, theology alone does not save – only Jesus saves. The life, work, death and resurrection of Jesus provides the basis for our salvation. A particular theological preference does not.

I am not saying we can be saved with bad theology, or with no theology. We must believe the right things to be Christians (eg., that God exists; we are separated from him because of our sin; Jesus came to deal with the sin question; faith and repentance are needed to get us right with God; etc.).

But simply having certain beliefs – even good and right beliefs – without also having a life-changing commitment to Christ based on ongoing faith and obedience is not going to save anyone. Once again, avoiding unhelpful extremes is so very necessary here.

Three. Theological pride is sinful. We all know of folks who are so very theologically-minded, but sadly they are overwhelmingly arrogant as well. They take great pride in their theological knowledge, and they are quite happy to build themselves up by tearing others down.

But as the Apostle Paul makes clear, knowledge puffs up (1 Corinthians 8:1), and that can include theological knowledge. Mere head knowledge can lead to overbearing pride and arrogance. Heart knowledge must go along with head knowledge. Being a super-duper theologian who lacks love, grace and humility is not what we want.

Theological arrogance is as sinful as any other form of pride. But the opposite error must be avoided as well: seeking to be deliberately dumb and uninformed about what you believe. We are told to be mature in our understanding, sound in our doctrine, and complete in our knowledge. That leads to my next point.

Four. Refusal to learn and study and embrace good doctrine is also sinful. Jesus made it clear that we are to love God with all our mind, and that means actually thinking carefully and clearly about what Scripture teaches. Paul and the other disciples spoke repeatedly of the importance of study and knowledge.

Some of the most dangerous and unhinged Christians around are those who proudly boast of having no need of human teachers, and just rely on the Holy Ghost. Sorry, that is an indication of arrogance and the flesh. God works through people, and he has given teachers to help equip the Body. The Holy Spirit works through others, not apart from others.

Five. Most of these theological topics can be incredibly nuanced and complex, worthy of years of careful study, but some folks want to weigh in with little more than emotive, kneejerk reactions. Sadly too many believers are way out of their theological depth on these matters, but instead of showing a bit of humility, they will dig in their heels even further and argue even more ferociously.

Indeed, there sometimes seems to be an inverse relationship going on here: the less they may know about a theological topic, the more they like to argue about it and pick a fight over it! They really are little more than trolls therefore, and are not worth spending time with. As I keep saying, a bit of humility goes a long way here.

Six. Often far more heat than light is generated in various theological debates. Some people seem to just love to argue, and for them the main thing is to be found “right,” regardless of how unloving and ungracious they can become in making their case. Winning the argument is all that seems to matter to some of these folks.

Sadly some folks just love to argue, end of story. They are professional pugilists who delight in spending all their time getting into arguments with others. That seems to be their full time occupation. They are theological trolls who exist simply to pick a fight and attack other brethren.

Needless to say I really want nothing to do with such people – nor should you. They are in fact the sorts of folks Paul warned about: “Avoid godless chatter, because those who indulge in it will become more and more ungodly” (2 Timothy 2:16); “But avoid foolish controversies and genealogies and arguments and quarrels about the law, because these are unprofitable and useless” (Titus 3:9).

To properly debate complex theological issues, you really need to know something about what those you are opposing in fact believe. You actually need to read what they have written and not just take pot shots at caricatures of what their position is. Intellectual integrity requires that we really know what the other side believes before we mount a full scale theological attack against them.

Eight. These major theological topics have been discussed and debated for many centuries now, and entire libraries exist offering the various pros and cons on many of these issues. Thus they can scarcely be properly debated in little comment boxes on my website, and even less so in tiny Facebook comment boxes.

That is why if I do dare to wade into some of these hard core theological debates, I greatly prefer to at least pen some lengthy articles on such issues first, to provide a bit of an introduction to some rather difficult topics. Such intro pieces can also help clear up misunderstandings, deal with red herrings and properly lay out the case, including basic pros and cons. After such pieces are written then I am much more happy for some debate to follow.

Nine. While we all should have a child-like faith, that does not mean we should be childish in our understanding. The truth is, while the gospel is simple enough for any child to understand, it is deep and complex enough for a million scholars and theologians to never come close to properly understanding.

God by definition is never going to be fully understood in this lifetime, and thus a lifetime of learning and study is only a start. So we must use our minds for the glory of God and do the hard work of detailed study, lengthy reading and deep thinking about the great truths of God as found in Scripture and as discussed by theologians over the centuries.

But we also must retain that child-like faith which is devoted to Christ in simplicity and sincerity. A child who loves and trusts his or her parents implicitly is how we need to be with God. And this sort of attitude leads me to my final point.

Ten. Humility really does go a long way here. We do not know everything. We all see through a glass darkly. We are all finite and fallen individuals who are in an ongoing process of growth, and that includes theological growth. The humble Christian admits that he has much to learn, that he is capable of error, and he needs to be continuously on his knees.

When I was a new believer there were certain doctrines and beliefs (basically of a secondary nature) which I used to heartily adhere to and defend to the death. But now some of those doctrines and teachings I no longer hold to – or at least I am much more flexible about. And I suspect that on some other lesser matters I may well shift my views in the days ahead.

I am not saying we should hold loosely the core Christian beliefs (the deity of Christ, the triune nature of God, etc.), but on many of the much more secondary matters of the faith we can hold things much less tightly. God resists the proud and is near to the humble, so if you want his presence with you and guiding you as you do theology, stay on your knees.

Of course much more can be said about these sorts of issues. And I undoubtedly will keep saying more on this. But these ten theses may help to explain where I am coming from at least, and may serve as helpful guidelines for other believers as well.

4 Replies to “Ten Theses on Theology”