I do not mind using secular thoughts or phrases, but I want above all to be biblical. So I was a bit hesitant to run with this. I agreed with the sentiments of it, but also knew that as a believer I must be patient with folks, and forbearing, and even loving, no matter how foolish they may be or how many dumb things they may say.

I was thinking about this phrase once again just now and thought I would do a quick online search, and learn a bit about its origin. Well duh! I should have known! Why I did not put two and two together before now is beyond me. It turns out the phrase is fully biblical!

Perhaps it is because it is more closely connected with the KJV, which I no longer use as much nowadays, that I did not make the obvious connection. This is how the KJV translates 2 Corinthians 11:19: “For ye suffer fools gladly, seeing ye yourselves are wise.” 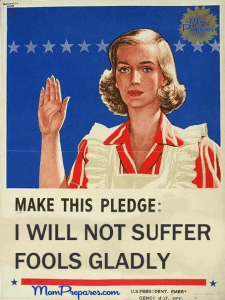 A few newer translations put this sentence as follows:

-For you, being so wise, tolerate the foolish gladly. NASB
-You gladly put up with fools since you are so wise! NIV
-For you gladly bear with fools, being wise yourselves! RSV, ESV

Finally, I can find some biblical warrant for discussing this, and not feeling like I am just taking up a worldly concept. Sure, I have long agreed with the sentiment being expressed here. And yes I know that we must learn to love others, especially those we disagree with.

And I have no problems with using the word “fool” as well. It is a completely biblical term used over and over again to discuss those who are at odds with God and his ways. And it is often used of fellow believers as well, not just in the above passage but elsewhere. Think of Galatians 3:1 for example where Paul speaks of those “foolish Galatians”.

Jesus too was quite willing to refer to others as fools. But I penned an entire piece on this, so see here for more: billmuehlenberg.com/2015/07/07/difficult-bible-passages-matthew-522-2/

Let me provide just a bit more personal background to all this, and then I will look more closely at this Pauline passage. Many years ago at a conference I was speaking at, one of the other speakers and I were sitting just outside of the main auditorium where other speakers were doing their thing.

We were discussing some of the things being said, and he – being a well-respected academic and terrific bioethicist – used the phrase again: “I don’t suffer fools gladly”. I knew just how he felt, as I too can become quite impatient and upset with those who spout silly and ignorant things.

But I thought at the time that while it is indeed problematic when others – especially other believers – say really dopey and idiotic things – I also have a Christian obligation to love such people, and not just get upset or impatient. But each time I hear another really moronic thing being said, that phrase continues to ring through my head.

Just today yet another unhelpful and silly remark was made, so again the phrase popped into my mind. That is why I finally looked it up just now, and that is why I am kicking myself for not realising its biblical roots much earlier on. Having offered that bit of personal story, let me now look at the text a bit more closely.

The bigger context is the entire book of 2 Corinthians, which in good measure involves Paul defending his apostleship over against the “super-apostles” he is contending with at Corinth. The more immediate context is all of chapter 11 where he again has to defend his apostleship. He boasts of his sufferings, and says this in verse 16-21:

I repeat: Let no one take me for a fool. But if you do, then tolerate me just as you would a fool, so that I may do a little boasting. In this self-confident boasting I am not talking as the Lord would, but as a fool. Since many are boasting in the way the world does, I too will boast. You gladly put up with fools since you are so wise! In fact, you even put up with anyone who enslaves you or exploits you or takes advantage of you or puts on airs or slaps you in the face. To my shame I admit that we were too weak for that!

He becomes ‘foolish’ like his opponents in order to rebuke them. He uses irony to make his point: ‘If you put up with fools so readily, then put up with me.’ His intent in all this is clear: ‘Stop putting up with these fools. Stop permitting them to carry on. Do not tolerate this. Do not gladly put up with all this.’

As D. A. Carson writes, Paul moves his attention from the false apostles to the Corinthians themselves, “and his tone becomes ironical, even scathing, as he tries to make them see that their vaunted tolerance has enslaved them, their proud wisdom has proved to be folly, their blind acceptance of the intruders and their false criteria have resulted in pain and despoliation of their substance.”

The real fools here are the Corinthians who have put up with all the damaging claims and pretentions that these false apostles are dishing up. So in his ‘fool’s speech’ Paul chastises them for this, rebuking them for their lack of discernment, their naivety, and their gullibility.

As George Guthrie remarks, “it seems that the Corinthians, in their ‘wisdom,’ like listening to fools.” He reminds us that Paul has already said in 11:1 and 4 that they had put up with those who were preaching a different Jesus. Such tolerance and forbearing is not virtuous but sinful.

We are not to tolerate that which is evil, and that includes false teaching and harmful doctrines. And the attitudes of the super apostles were to be rejected as well. Instead of an emphasis on power and strength and arrogance and lordship, Paul emphasised in word and deed meekness, weakness, humility and servanthood.

And it is exactly because Paul so deeply loves the Corinthians that he offers them this scathing critique and stinging rebuke. He knows that false apostles can only harm them, and therefore he has to shock them out of their foolishness and their theological stupor.

On this issue of genuine versus false leadership that Paul writes about and exemplifies, Linda Belleville reminds us that the church today is equally in need of hearing such teaching. She writes:

We may be quick to scoff at a church like Corinth. How could a church permit itself to be browbeaten like this? What kind of wimps were they to so readily accept such leadership? But are the Corinthians really so different from some of our contemporary churches? A take-charge, strong-arm style of leadership is valued by many within evangelicalism today. Those who lead in this way typically claim to be exercising their God-given authority. Interestingly enough, though, Paul rejects this style of leadership in his own ministry (“not that we lord it over your faith,” 1:24)–as do other New Testament writers (for example, see Mt 20:25-26; 1 Pet 5:3). In fact, the language of “bearing rule,” “governing” and “exercising authority” is not used by the New Testament writers to describe the leadership role in the church. It is employed only of the apostles and the congregation, not of an individual within the local church context.

So we have many lessons to learn from all this as well. And to get back to my original point, it seems there most certainly is a biblical and Christian case to not suffer fools gladly. We need not allow every bad action, bad idea or bad worldview a free run. Actions and ideologies and beliefs which are harming people must be exposed and confronted.

So the next time you feel welling up within you the need to not suffer fools gladly, it may just be the flesh, but it may also be the Spirit of God within you, leading you into a bit of righteous indignation. While we are to test all things – including the thoughts and feelings that spring up within us – there is a place for some holy anger over idiotic ideas, dodgy doctrines, and perilous practices.

10 Replies to “On Not Suffering Fools Gladly”