There is not a Christian around who should take flippantly the many warnings found in Scripture. One of the most shocking and sobering of these warnings come from the lips of Jesus. In Matthew 7:21-23 we find him telling his disciples some of the most frightening words in all the Bible. He said:

“Not everyone who says to Me, ‘Lord, Lord,’ shall enter the kingdom of heaven, but he who does the will of My Father in heaven. Many will say to Me in that day, ‘Lord, Lord, have we not prophesied in Your name, cast out demons in Your name, and done many wonders in Your name?’ And then I will declare to them, ‘I never knew you; depart from Me, you who practice lawlessness!’”

Wow. Here we learn that there are actually people – perhaps many – who blissfully assume they are part of God’s family, who simply take it for granted that things are just fine in their Christian walk, that they are ready to waltz into heaven, only to be met with the most shocking words they can ever hear.

This warning alone should send shivers down the spines of every single one of us. It should cause all of us to stand up and take notice. It should cause us to do some deep introspection. Indeed, another passage which also deserves some very careful meditation is Jeremiah 17:9: “The heart is deceitful above all things and beyond cure. Who can understand it?” 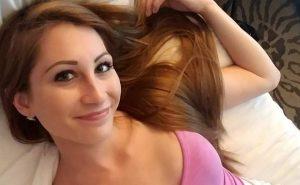 The ability for people to deceive themselves seems to be unlimited. And believers are not exempt from this. It is so very easy to think that we are great Christians when in fact we are far from God. And all this brings me to my title. A newspaper article I read today was a real shocker, and it demonstrates just what Jesus, Jeremiah and others spoke about.

Now I realise that you can’t always believe everything you read in newspapers, so I cannot fully vouch for the veracity of this story. Indeed, the article does not even say where she is from. But a link to another article indicates that she teaches in Los Angeles in the US. Since the original piece is relatively brief, let me offer it here in its entirety:

A Christian kindergarten school teacher was fired for refusing to give up her side job as a $2,500-a-time porn star. Nina Skye, 21, declared ‘I love teaching, I love sex’ before a showdown with shocked bosses who confronted her over appearances in films with titles including Amateur Allure and Swallow Salon.
The auburn-haired beauty, who romps with men and women in the videos, said she was a ‘really good teacher’ and did not see why her hobby should bar her from the classroom. But senior teachers at the unidentified pre-school thought differently, and said her profession went against the religious values they espoused.
Having sex was her dream job, Ms Skye said, and she was very reluctant to leave the industry. She told Fox: ‘It goes against their views of fornication, like sex before marriage and that’s what I’m doing. They say it goes against the paper I signed, saying I wouldn’t do that. They were really trying to pull me away from staying in the industry. They just really wanted me out. They offered help and advice, but I don’t really want out.’
Ms Skye said she liked having an open-minded outlook, adding: ‘I love teaching and sex. If I can get away with doing both, then I will. It’s easy money. For my very first scene, I just did a regular boy on girl and I got paid $2,500 on the spot. I never had that much money, ever, just handed to me in my life. There’s a really big stigma associated with it, and how our society views it. But that’s not how I am. I’m really open-minded. Super open-minded and not judgmental.’

Yikes, what can we say? One would almost think that this was a fake news story. However, with Christian standards hitting an all-time low in so much of the West, we actually should not be surprised if this is indeed a fully legit story.

There are so many people running around today professing to be Christians, but their lives clearly indicate something completely other than that being the case. They live like the devil and think they belong to Jesus Christ. Um, sorry, no dice. It just does not work that way.

Those who agree with God that they are hell-bound sinners with no hope, but cast themselves upon the mercy of God can find forgiveness and newness of life when they come to Christ in faith and repentance. There is nothing to indicate in this story that this gal has repented or agreed with God about her sin.

Indeed, she is shaking her fist at God, calling him a liar. She thinks she can determine what is right and wrong, and God should just nod his head in agreement with her moral – or immoral – standards. Sorry, but this is not how things operate. The creator of the universe gets to call the shots here, and he gets to tell us what is right and wrong, true and false. It is our job to get in sync with him, and not the other way around.

As I said, I know nothing about her and this story aside from what a few newspaper articles have said. And I have no intention of doing a detailed search to learn more about her thanks. Assuming the story is more or less accurate however, there are a few things that we can say about it in conclusion.

Firstly, of course, we can pray for her. She is living in deception big time, and she needs to be jolted out of her devilish ways real fast. Unless she has a major change of heart and mind, she is headed on a one way journey, and it is not toward God but away from God.

After all, she did proudly state how open-minded she is and how non-judgmental she is. So where did she learn to think like this? Sure, the world is pushing these ideas all the time, but sadly more and more churches are pushing them as well.

Sorry, but a lot of open minds need to be closed for repairs, and her love of “non-judgmentalism” comes straight out of the pit. It sure does not come from God. Everywhere in Scripture we are told to make moral judgments and assessments.

Being able to discern good from evil is just the start of this. But we live in a culture where the black and white of right and wrong have been replaced with 99 shades of grey. And far too many churches are also sucking up this poisonous moral relativism.