As Malcolm Turnbull – who originally wanted to be a Labor Party politician – continues to destroy the Liberal party, the hope of true conservatives must be found elsewhere. And the best chance we have of seeing a genuine conservative party established and become a real force to be reckoned with is with Cory Bernardi and his new Australian Conservatives party.

The long list of Labor-lite policies and views of Turnbull and the moderate Libs increases by the day. Most recently we had several more clear indications of this. The Government had a chance to appoint a genuine conservative – Perth law lecturer Augusto Zimmermann – to replace Gillian Triggs as head of the Australian Human Rights Commission. But they went with a Triggs-lite appointee instead. 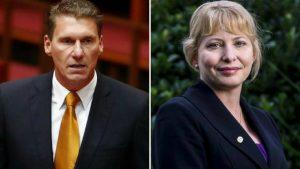 And we have just learned that moderate Liberal Christopher Pyne told folks on the weekend that the party is working to get homosexual marriage legalised. This despite the party promise to run with a plebiscite on it, and let the people decide. A news item on this begins as follows:

A rift in the Liberal Party has flared over same-sex marriage again after one senior minister bragged it could be introduced “sooner than everyone thinks”. Former Prime Minister Tony Abbott has accused Defence Industry Minister Christopher Pyne of being disloyal after making the remarks at the weekend.
Mr Pyne, a moderate member of the Liberal Party, had told party faithful that their “friends in Canberra” were working on getting marriage equality laws passed. “We took a policy to the election — it was a very clear policy — that there would be no change without a plebiscite,” Mr Abbott told Sydney radio station 2GB this morning. “To dump the plebiscite, to do anything without a plebiscite, would be a breach of faith with the people.”

Plenty more such appalling decisions and policies of the Turnbull Government could be mentioned. Now plenty of conservative commentators are discussing the implosion of the Liberal Party. For example in today’s Australian Greg Sheridan wrote about “Divided Liberals one spark away from crisis”. He begins his piece this way:

The Liberal Party today is in the grips of a terrible crisis of faith that could well destroy the Turnbull government. The financial membership and activist base of the party is substantially alienated from the Coalition government. The backbench is substantially alienated from the cabinet.
The situation within the party is much closer to tinder-dry scrubland before an oppressive summer than anything else. All that is needed is a spark. If Malcolm Turnbull misjudges action on the Finkel review on energy this could well occasion a party crisis. The biggest disaster for the government in the Newspolls is not just losing 14 in a row, but the steady rise of the vote for Pauline Hanson, now 11 per cent nationwide.
Senator Cory Bernardi and his Australian Conservatives are rampaging around the country, scooping up the non-Hanson conservative forces. He scooped up Family First activists, who did not return to the Liberals. He is in the process of scooping up others. If Bernardi gets any profile at all, he represents a deadly threat to the Liberals. Hanson provides an alternative to them on the populist right, Bernardi on the respectable right.

Bernardi left the Coalition and formed the AC in February. He is filling in a vacuum left by the Libs, and his new party is a grass-roots movement that seems to be going from strength to strength. Just today we learned of another big win for Bernardi: the move of conservative champion Rachel Carling-Jenkins, DLP upper house member in Victoria from the DLP to the AC. Bernardi has had a number of small-scale defections from other smaller parties so far, including:

-Members of the Australian Christians party in Victoria
-A number of Family First members and MPs in South Australia
-Kirralie Smith from Australian Liberty Alliance
-And now high-flyer Rachel Carling-Jenkins.

She said this about the move: “I have joined this party quite simply because it is about uniting conservatives across our great state. I think it’s time (to leave the DLP) and many voters have demanded this from me, that we unite as a conservative united front. I think that’s being faithful to the voters who voted me in.”

You can see her brand new AC website here: rachelcarlingjenkins-australianconservatives.nationbuilder.com/stay_in_touch

And Bernardi said this about her addition to the team:

Rachel has a PhD in Social Science where she studied social movements supporting people with disabilities, Indigenous Australians and women in Australia. She also recognises that a strong economy is the key to attaining better outcomes for all Australians.
As a defender of our traditional freedoms, Rachel recognises the importance of civil society as the framework for sustainable prosperity. With her unique gifts and talents, Rachel will strengthen the Australian Conservatives voice supporting our agenda of free enterprise, limited government, personal responsibility and civil society.

Good move. As I have been telling many folks for some months now, the Liberal Party is now but an empty shell, a pale reflection of what it used to be. When the moderates and soft left Libs decided to stab conservative leader Tony Abbott in the back and run with the appallingly bad Turnbull, we knew the gig was up.

Thus it is great to see the courage of people like Bernardi who have had enough, and realise that true conservative principles, values and policies will not be forthcoming from the dying Libs. All that he needs to do now is win over some more of his colleagues, and his will be the conservative party we have all been looking for, and can cast our votes.

It is high time the remaining Liberal conservatives such as Abbott, Eric Abetz, George Christensen, Kevin Andrews and some others realise that staying on the Titanic will get them nowhere, and it is time to jump ship. The hope of the conservative future no longer lies with the Liberals, but with rising star Cory Bernardi.

And as hard as it may be for some, it may well be time that some of the other smaller conservative, family, and Christian parties also look at joining forces with Cory. And individuals can also get involved. If you have not already done so, I suggest to join the AC team. Their membership page is found here: www.conservatives.org.au/membership

Also, please keep Cory and the team in your prayers. The party is overwhelmingly made up of Christians of various stripes, so the MSM, the political establishment, and the spiritual forces of darkness will all be pouring their wrath out on Cory and the team.