This is a passage which is problematic because of various strong views associated with it. So it might be better referred to as a contentious passage. It says this: “but when completeness comes, what is in part disappears.” What disappears? And what is this completeness?

Well the context is clear as to the first question. The larger context is 1 Cor. 12-14 which is all about the spiritual gifts. Snuggled in the middle of this is of course chapter 13 – the love chapter. And in 1 Cor. 13:8-13 Paul speaks of the importance of love in relation to the gifts.

Paul says tongues and prophecies and knowledge will eventually cease or disappear. But a key hermeneutical question is how we understand ‘completeness,’ or ‘the complete’ (ISV), or ‘the perfect’ (as most other translations put it). And this is part of a bigger discussion. 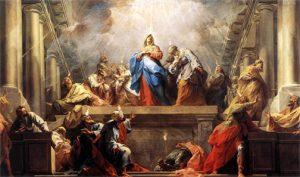 Where one stands on the broader issue of whether the miraculous gifts are still for today will largely determine how you understand this passage. Some argue that these gifts ended with the early church and are no longer available today (cessationists). Others argue that they still continue.

Cessationists maintain that ‘the perfect’ can refer to several options: the completion of the canon, or the maturing of the church. When the New Testament is finished and Scripture is complete, or when the church matures (which is associated with the end of the apostolic era), then there is no more need for these sign gifts (or miraculous gifts, or revelatory gifts).

But most scholars when dealing with the text as it is, without seeking to impose upon it a predetermined viewpoint on the gifts, argue that ‘the perfect’ refers to eschatological reality, having to do with when Christ returns and the end of the age takes place. When he comes again these sign gifts will no longer be needed.

But until he does return, these gifts can help the church to fulfil its mission. Or so many would argue, except the cessationists. As I say, there is a much bigger discussion to be had to help settle our answer to the question of the gifts and if they continue.

That discussion I will have to save for another time. All I want to do here is try to get a handle on what Paul is trying to say in verse 10. That is, what does he mean by ‘the perfect’? Are the cessationists right in their take on this? To try to answer this, I have pulled down a whole shelf full of commentaries on 1 Corinthians.

Of course there would be other ways to deal with verse ten, but listening to New Testament exegetes and experts on the matter is one of them. Of interest, every single one of the commentaries I looked at rejected the two minority view options of a completed canon or a mature church (or individual).

All of them agreed that the parousia, or aspects of it, is clearly what Paul has in view here. It is the end of the age and the return of the Lord that is the perfect, bringing to an end the incomplete or the imperfect. And it should be noted that many of these commentators may well be cessationists themselves, but they realise that their case cannot be made from this passage.

Let me begin with New Testament scholar Gordon Fee. He says this about the term:

The nature of the eschatological language in v. 12 further implies that the term “the perfect” has to do with the Eschaton itself, not some form of “perfection” in the present age. It is not so much that the End itself is “the perfect,” language that does not make tolerably good sense; rather, it is what happens at the End, when the goal has been reached. At the coming of Christ the final purpose of God’s saving work in Christ will have been reached; at that point those gifts now necessary for the building up of the church in the present age will disappear, because “the complete” will have come.

Of course cessationists may want to dismiss Fee’s remarks, simply because he is not a cessationist, and is in fact a Pentecostal. But plenty of other scholars share his view, and most would not be Pentecostals or charismatics. They simply think the case for cessationism is not best made from 1 Cor. 13. Perhaps elsewhere, but not from this verse.

Craig Blomberg says this: “Although later interpreters have at times felt otherwise, nothing in Paul supports any consciousness of his writing near the end of an apostolic age or the close of a biblical canon. And the metaphors in verse 12 fit poorly with such interpretations. . . . There can be only one possible interpretation of ‘perfection’—it is the life in the world to come after Jesus reappears on earth.”

“The perfect” refers to the state of affairs brought about by the Parousia. . . . Here, the battery of future tenses, the disappearance of the partial replaced by the complete, and the reference to knowing as God knows us, all point to the end time. The “perfect” is shorthand for the consummation of all things, the intended goal of creation; and its arrival will naturally displace the partial that we experience in the present age. Human gifts shine gloriously in this world but will fade to nothing in the presence of what is perfect.

Or as Roy Ciampa and Brian Rosner put it, “The context (esp. v. 12) makes it absolutely clear, however, that the point at which Paul expects the gifts to pass away or disappear is when we see the Lord ‘face to face’ and ‘know [him] fully, even as [we are] fully known’.”

In his very helpful brief volume, Showing the Spirit: A Theological Exposition of 1 Corinthians 12-14, D. A. Carson spends a number of pages on the perfect. He dismisses the two minority views as unpersuasive, and argues for the majority view, that the parousia is in view, arguing that it “has powerful evidence in its defence.”

He then offers seven lengthy factors why this is the case, and concludes with these words: “In these verses Paul establishes the end of the age as the time when these gifts must finally be abolished.” Let me now look at some briefer remarks.

Leon Morris says the perfect “points to God’s plan. When the consummation is reached, all that is partial will be done away.” Marion Soards says this refers to “the eschatological end of imperfection” and, tying in with 1 Cor. 3:10-15, is about the sorts of things that “will survive God’s scrutiny on the Day of final judgment.”

N. T. Wright says the perfect has to do with “the age to come” and with “God’s new world.” David Prior says that these gifts “will either become irrelevant or else be swallowed up in the perfection of eternity.” Ben Witherington says this: “Tongues will cease when the Lord returns and completes his plans for Christians.”

Mark Taylor comments, “The coming of ‘perfection,’ literally, ‘the perfect thing,’ undoubtedly refers to the consummation of all things.” And Anthony Thiselton says this refers to “the eschatological act of definitive divine judgment which evaluates everything” and it amounts to “a new creation. . . . Paul is speaking of the eschatological consummation when the gifts will no longer be needed.”

In sum, you may well argue that there are biblical and theological reasons for adhering to cessationism. That case – and the case against it – can be argued in its own right. But appealing to 1 Cor. 13:10 is not a very helpful passage to run with if you are a cessationist. That is the sole point I have sought to make here.

Sure, biblical truth is not determined solely by majority vote. But on an issue like this when we have so many top notch evangelical and conservative scholars in agreement with how to render a term – even if some may not be believers in the continuation of the gifts – then we can be fairly confident that we are on the right path.

If past experience is anything to go on, most folks will not read this, and if they do, they will ignore my wishes completely! But let me say what needs to be said nonetheless. I have said before that I tend to avoid certain theological battles because people can get so impassioned and upset about things if people dare to take a differing view.

Far too often in these sorts of debates heat rather than light is generated. Some people just insist on arguing their pet views, and will hurl anathemas at anyone who disagrees. And they will want to “educate” me as well. But let me point out that when I was an early Christian I was a gung-ho cessationist, and knew all the arguments and texts to be used.

Over the years I have modified my position somewhat, and cannot now be described as a cessationist. Yes there is plenty of Pentecostal and/or charismatic excess that one must avoid, but I have discussed these matters elsewhere. See here on this: billmuehlenberg.com/2013/10/18/on-strange-fire-part-one/

So there is no real need for folks to come to this site and try to “correct” me on these matters thanks. I really am quite aware of both sides of the debate. So please, do not post comments here hoping to start WWIII on this. Until I do much more introductory work on this issue, and the broader questions involved, I am not interested in having another punch-up about this.

My purpose has been quite narrow here and quite specific: to try to best understand what Paul is saying in this text. The bigger debate over whether or not these gifts are still for today needs much more discussion on my part before a proper debate can ensue. So if you are chomping at the bits to push your fav viewpoint here, perhaps wait until I pen these other pieces thanks.

Lastly, although I should save this for my bigger picture pieces on the broader debate, there is a huge amount of literature one can submerse oneself in. Let me mention just one helpful volume edited by Wayne Grudem called Are the Miraculous Gifts for Today? Four Views (IVP, 1996).