It was the renowned journalist Malcolm Muggeridge who used to speak about the “great liberal death wish”. There were various versions of this given, either as an essay or a talk. Here is a short part of one such version:

Searching in my mind for an appropriate name for the ’70s, I settle for The Decade of The Great Liberal Death Wish. It seems to me that this process of death-wishing, in the guise of liberalism, has been eroding the civilization of the West for a century or more, and is now about to reach its apogee. … Systematically, stage by stage, dismantling our Western way of life, depreciating and deprecating all its values so that the social structure is now tumbling down, dethroning its God, undermining all its certainties, and finally mobilizing a Praetorian Guard of ribald students, maintained at public expense, and ready at the drop of a hat to go into action, not only against their own weak-kneed, bemused academic authorities, but also against any institution or organ for the maintenance of law and order still capable of functioning, especially the police. 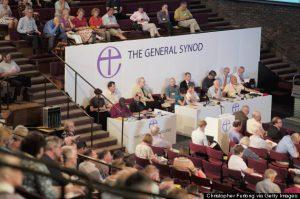 He speaks of course about how the West is cowing before its enemies, agreeing with them that it is time for the West to go, and renouncing its own values, beliefs and foundational principles. Ideological self-immolation in other words. It is not just Western politics and culture which is involved in this, but sadly and much more despicably, so many of our Christian churches.

And we see a perfect example of this with the latest week-long General Synod of the Church of England, this one being held in York on July 7-11. As one concerned writer notes, this is the Church of England’s “highest decision-making body. It holds congress twice a year—in Westminster and in York….

“Over 400 bishops, clergy and laity will attend its sessions. Members may propose motions, ask questions, discuss positions and raise issues for debate. It is their chance to table the most serious issues facing Christianity and therefore society today.”

But as this writer, Rev. Jules Gomes, points out, the questions being asked and debated were not about vitally important matters such as the worldwide persecution of Christians. The modern-day genocide of Christians, overwhelmingly at the hands of devout Muslims, should indeed be a key issue for the week. But not so. Says Gomes:

While their Christian brethren— bishops, priests, nuns, evangelists and congregation members – are raped, stoned, crucified or machine-gunned to death, while their churches are bombed or burned down, while modern day Neros are throwing Christians to the lions, what the members of General Synod are suffering from is a preoccupation with sex.
As the veteran conservative blogger Adrian Hilton observed earlier this week regarding this week’s Synod: ‘Of the 85 listed Synod questions, not one – not one – is concerned with the plight of the persecuted church worldwide. There are questions about sex, sexuality, sex, LGBT, sex, LGTBQIA (what?), sex, LGBTI, sex, same-sex marriage, sex, “gay cure” conversion therapy, sex, sex, and sex. Oh, there’s a question on ‘Monitoring air quality’, too. That’s diversity of obsession. Welcome to the General Sex Synod of the Church of England.’
‘Sex’ is to General Synod what the ‘bell’ was to the Russian psychologist Ivan Pavlov’s salivating dogs. The Church of England has sex on the brain. Four African nations face one of the worst famine crises since World War II yet all the Church of England can obsess about is what lies below, not above, the belt.
So why this fixation on sex? And at a time that Justin Welby is facing serious questions regarding two of the most significant sexual abuse scandals in recent archiepiscopal memory? Could this be another diversionary virtue-signalling media tactic as was scapegoating the former conservative ABC George Carey, while letting the former liberal ABC Rowan Williams get away with a rap on the knuckles?

Instead of having Bibles in the pew, it is likely members of General Synod will be given an illustrated copy of the Kama Sutra! Watching the antics of the General Synod Sex Circus, the Hungarian-born British journalist George Mikes, would have to rewrite the chapter on sex in his very funny book How to be an Alien. ‘European men and women have sex-lives; English men and women have hot-water bottles,’ he wrote in 1946. Not any more! And certainly not if you are on General Synod! You are more likely to get a sex therapy session.

A day after writing that, we have an even better idea as to just what kind of mischief these folks have gotten up to. And it sure is not looking pretty. Here is how one report discusses the proceedings:

The General Synod of the Church of England has officially passed a motion welcoming and affirming transgender people to the church. A top bishop also declared that being LGBT is “not a sin.”
“That this Synod, recognizing the need for transgender people to be welcomed and affirmed in their parish church, call on the House of Bishops to consider whether some nationally commended liturgical materials might be prepared to mark a person’s gender transition,” the motion that passed on Sunday reads.
As the official CofE website points out, the vote went overwhelmingly in favor of welcoming transgender people, with 30 for the motion and two opposed in the House of Bishops; 127 who backed the motion and 28 against it in the House of Clergy; and 127 for and 48 against in the House of Laity.
The Rev. Christopher Newlands of the Blackburn Diocesan Synod said at the beginning of the assembly: “I hope that we can make a powerful statement to say that we believe that trans people are cherished and loved by God, who created them, and is present through all the twists and turns of their lives.”
During the synod’s weekend session, the church body also backed a motion calling for a ban on what critics have called “conversion therapy” for people with unwanted same-sex attractions.
The Archbishop of York, the Most Rev. John Sentamu, who is one of the most senior officials in the CofE, declared: “As the world listens to us, the world needs to hear us say that LGBT orientation and identity is not a crime. LGBT orientation and identity is not a sickness. And LGBT orientation and identity is not a sin,” Sentamu added, according to BBC News.

Thankfully not everyone there has ditched their Bibles for Playboy magazine and the complete works of Freud, Kinsey, Hefner and Tatchell. As usual, Church of England members from the developing world were keen to hold the line:

Concerns from Anglican conservatives over the pro-LGBT direction they say the CofE has taken has led groups such as the Global Anglican Future Conference to put forward their own “missionary bishop” to oversee traditional Anglican parishes.
GAFCON has said that the Western world is “abandoning Christian heritage,” and warned that a number of U.K. churches are “under pressure to compromise clear Christian teaching in the face of secular humanist philosophy.
“In some cases, the Gospel appears to have been watered down or even denied. Even some faithful clergy do not feel free to give clear teaching on key topics such as sexual ethics or the uniqueness of Christ,” GAFCON said earlier.
Archbishop Nicholas Okoh, the Metropolitan and Primate of All Nigeria and Chairman of the GAFCON Primates Council, wrote following The Scottish Episcopal Church’s decision to change its laws on marriage:
“This attempt to redefine marriage is not a secondary issue about which we can agree to disagree and continue to walk together. It means that Jesus was mistaken when he taught that marriage was between a man and a woman and that sex outside of such a marriage is a sin.
“It is a radical rejection of the authority of Scripture. The Church claims that it can consecrate behavior that God’s Word clearly teaches to be sinful. According to the Bible, this behavior, without repentance, separates those who practice it from his kingdom.”

Thank God for the African and other Christians who still read the Bible, who refuse to bow down to the spirit of the age, and resist fiercely the politically correct mainstreaming of what Scripture clearly calls sin. The CofE in the West is clearly pushing its own version of the great liberal death wish.

We see it being played out right before our eyes. Not only is this abandonment of the gospel and this move to radical secular left sexuality going to harm millions in and out of the CofE, but worse yet, imagine what these “leaders” are going to hear when they stand face to face with the risen Christ one day.

If you are not sure what that might be, let me tell you. Jesus made it perfectly clear in Matthew 7:21-23: