“Who me, deny the Lord?” you might be saying right now. Yes you. It is time to get real here. How many Christians are in fact denying their Lord in all sorts of ways, maybe even on a daily basis? How many because of cowardice, because of being men-pleasers, because of wanting to be accepted, will refuse to stand for Christ, especially at crunch times?

How often have we had a chance to share the gospel or talk about Jesus or stand up for a crucial ethical issue, yet we have remained silent, fearful of upsetting folks and losing “friends,”  or worried about what they might think of us? Come on, let’s be honest with ourselves here.

This is a massive problem and sadly I see it happening all the time. Indeed, I have even had good Christians tell me how fearful they are of speaking up. And they may have all sorts of good reasons for this silence, such as the need to keep their jobs so they can feed their families. 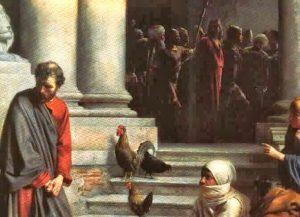 Yes we all must look after our families, and yes we all must be wise here and not reckless, silly or presumptuous. But I believe that as Western culture grows increasingly hostile to Christ and Christians, we will all be forced to make a choice: do we keep denying our Lord with our silence and our cowardice, or do we risk everything for Christ and the Kingdom?

Will we be willing to lose our jobs because we were much more worried about denying our Lord? And do we really believe that God is able to look after us, provide for us, and feed and clothe us, if we stand for him unflinchingly, whatever the cost?

Well, do we? We all need to be asking ourselves these sorts of questions as the days grow darker, the anti-Christian bigotry gets worse, and more and more believers decide to deny their faith instead of stand for what is right. Just whose side are you on actually?

And it is not just refusing to speak up for the Christ and share the gospel that I am referring to here. I believe we can just as effectively deny our Lord when we refuse to speak out on the issues of the day that are so vitally important. And it should be clear what some of these crucial moral and social issues are.

The battle for life is one obvious area. We all should be standing up for the unborn, for the elderly, for the weak. We should be resisting the culture of death. Consider just three biblical passages on this:

Psalm 82:2-4 Defend the cause of the weak and fatherless; maintain the rights of the poor and oppressed.
Rescue the weak and needy; deliver them from the hand of the wicked.

Proverbs 24:11 Rescue those being led away to death; hold back those staggering toward slaughter.

Proverbs 31:8 Speak up for those who cannot speak for themselves.

And the same with the war on marriage. God’s institutions of marriage and family are under massive assault right now, especially with the push to redefine and destroy marriage, and to steal from children their right to their own biological mother and father.

For all sorts of reasons they are sitting on their easy chairs tight-lipped as this war on marriage escalates. Shame on them. This is a gospel issue. This is something all followers of Jesus Christ must be involved in. By refusing to engage, we are effectively denying our Lord.

And the Bible speaks to this often, as you should know. One very ominous passage is found at the end of Luke’s gospel. In Luke 22:61-62 we find this: “And the Lord turned and looked at Peter. And Peter remembered the saying of the Lord, how he had said to him, ‘Before the rooster crows today, you will deny me three times.’ And he went out and wept bitterly.”

Wow, Peter denied Christ three times. But how many Christians have denied Christ hundreds of times by refusing to speak up, by refusing to resist the war on marriage, by worrying about what others may think, by cowering in fear? This is equally as serious and sinful as what Peter did.

Think also of some other very stern words from our Lord, such as Mark 8:38: “If anyone is ashamed of me and my words in this adulterous and sinful generation, the Son of Man will be ashamed of them when he comes in his Father’s glory with the holy angels.”

These are some very serious warnings which we all better pay very close attention to. I ask this again: Are we denying our Lord? Are we keeping silent about the things that matter when we should be shouting truth from the rooftops? Well, are we?

Let me finish with a few words to encourage you and inspire you in these matters:

“Rule of thumb: if your principles evaporate the moment courage is required to defend them, you have no principles. You’re a panderer, not a warrior.” Matt Walsh

“How few men are strong enough to stand against the prevailing currents of opinion.” Winston Churchill

“If I profess with the loudest voice and clearest exposition every portion of the truth of God except precisely that little point which the world and the devil are at that moment attacking, I am not confessing Christ, however boldly I may be professing Christ. Where the battle rages, there the loyalty of the soldier is proved, and to be steady on all the battle front besides is mere flight and disgrace if he flinches at that point.” Attributed to Martin Luther

“Even a dog barks when his master is attacked. I would be a coward if I saw that God’s truth is attacked and yet would remain silent.” John Calvin

“Silence in the face of evil is itself evil: God will not hold us guiltless. Not to speak is to speak. Not to act is to act.” Dietrich Bonhoeffer

“Courage is contagious. When a brave man takes a stand, the spines of others are often stiffened.” Billy Graham

Let me ask one last time: Are we denying our Lord?

16 Replies to “Christians: How Long Will You Keep Denying the Lord?”