I confess. I was once an out and proud member of the 60s counterculture. Yep, I was once fully into the whole thing: the hippy scene, the New Left, the drug culture, the Woodstock era, the peace, love and rock and roll culture, etc. My involvement was unlike many: most folks were in college while part of all this.

But I was still a high school kid, and I got heavily involved in the whole scene from around 1968 until August 1971 (when I made a radical break with that by becoming a Christian). You can read about my testimony and those heady days in this piece: billmuehlenberg.com/2012/06/27/coming-home-my-testimony-part-1/

Or, if you can’t read (in which case I guess you wouldn’t be reading this!), you can listen to my story here: www.youtube.com/watch?v=ytuiY7yBXMA 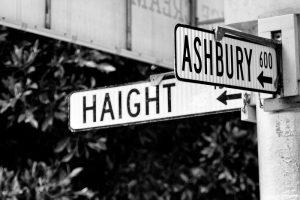 While it may be difficult to pinpoint exactly where and when the counterculture began, one could rightly highlight the Haight-Ashbury district in San Francisco in the mid to late 60s. Since the counterculture was such a big part of my young life, let me reminisce a bit here. One piece says this about the place:

The mainstream media’s coverage of hippie life in the Haight-Ashbury drew the attention of youth from all over America. Hunter S. Thompson labeled the district “Hashbury” in The New York Times Magazine, and the activities in the area were reported almost daily. The Haight-Ashbury district was sought out by hippies to constitute a community based upon counterculture ideals, drugs, and music. This neighborhood offered a concentrated gathering spot for hippies to create a social experiment that would soon spread throughout the nation.
The first ever head shop, Ron and Jay Thelin’s Psychedelic Shop, opened on Haight Street on January 3, 1966, offering hippies a spot to purchase marijuana and LSD, which was essential to hippie life in Haight-Ashbury. Along with businesses like the coffee shop The Blue Unicorn, the Psychedelic Shop quickly became one of the unofficial community centers for the growing numbers of freaks, heads, and hippies migrating to the neighborhood in 1966-67. The entire hippie community had easy access to drugs, which was perceived as a community unifier.
Another well-known neighborhood presence was the Diggers, a local “community anarchist” group known for its street theater, formed in the mid to late 1960s. The Diggers believed in a free society and the good in human nature. To express their belief, they established a free store, gave out free meals daily, and built a free medical clinic, which was the first of its kind, all of which functioned off of volunteers and donations. The Diggers were strongly opposed to a capitalistic society; they felt that by eliminating the need for money, people would be free to examine their own personal values, which would provoke people to change the way they lived to better suit their character, and thus lead a happier life.
During the 1967 Summer of Love, psychedelic rock music was entering the mainstream, receiving more and more commercial radio airplay. The Scott McKenzie song “San Francisco (Be Sure to Wear Flowers in Your Hair),” became a hit that year. The Monterey Pop Festival in June further cemented the status of psychedelic music as a part of mainstream culture and elevated local Haight bands such as the Grateful Dead, Big Brother and the Holding Company, and Jefferson Airplane to national stardom. A July 7, 1967, Time magazine cover story on “The Hippies: Philosophy of a Subculture,” an August CBS News television report on “The Hippie Temptation” and other major media interest in the hippie subculture exposed the Haight-Ashbury district to enormous national attention and popularized the counterculture movement across the country and around the world.
The neighborhood’s fame reached its peak as it became the haven for a number of psychedelic rock performers and groups of the time. The members of Jefferson Airplane and the Grateful Dead, and Janis Joplin, all lived close to the intersection. They not only immortalized the scene in song, but also knew many within the community.
The Summer of Love attracted a wide range of people of various ages: teenagers and college students drawn by their peers and the allure of joining a cultural utopia; middle-class vacationers; and even partying military personnel from bases within driving distance. The Haight-Ashbury could not accommodate this rapid influx of people, and the neighborhood scene quickly deteriorated. Overcrowding, homelessness, hunger, drug problems, and crime afflicted the neighborhood. Many people left in the autumn to resume their college studies. On October 6, 1967, those remaining in the Haight staged a mock funeral, Digger happening, “The Death of the Hippie” ceremony. Mary Kasper explained the message of the mock funeral as: “We wanted to signal that this was the end of it, don’t come out. Stay where you are! Bring the revolution to where you live. Don’t come here because it’s over and done with.”
After 1968, the area went into decline due to “an influx of hard drugs and a lack of police presence,” but was improved and renewed in the late 1970s.

As this representative piece makes clear, the counterculture was characterised by rebellion of all sorts. It was a protest movement against the police, parents, churches, the military, the West, capitalism, any form of authority, and “the system”. And it helped to birth the various “liberation” movements, such as gay power, black power and women’s lib.

We are of course still feeling the impact of all this today. And it has been a pretty nasty impact all things considered. As but one example, the recent transgender agenda grew directly out of the counterculture. As I told a Sydney audience yesterday, the radical feminist and homosexual movement contained all the seeds of the trans activism we now see everywhere.

The idea that gender is fluid and a mere social construct, that women are identical to (or better than) men, and the whole push for androgyny and so on was the obvious forerunner to the current trans flight from sanity. Now everything is under attack – not just gender, but biology, DNA, reason and reality itself. Nothing is safe anymore.

Speaking of which, I was in a mall earlier today and walked past at least two barbershops. I could not help but notice how horribly discriminatory, sexist, bigoted and intolerant they were. The first one listed basic prices: Children, $18; Men, $25; Women, $30.

The other one had much more detail, including prices for primary schoolers, secondary schoolers, retirees, etc. How discriminatory! If I were a male adult (which I am), but identified as an 8-year-old, could I demand to pay children’s prices?

If I were an adult female (which I am not), but identified as a male, could I get the cheaper haircut? If I were a 30-year-old (which I am not), yet claimed to be a retiree, should I not be able to get the senior citizen discount? If not, why not? Why all the bigotry? Why all the narrow-minded assumptions about age and gender? Why the discrimination?

The trans madness is just one part of the bitter fruit of the counterculture. And the sexual revolution was a major part of it all. Just yesterday on an airplane I noticed someone reading a newspaper article that is relevant here, so I tracked it down. The title is what had grabbed my attention. It included the phrase, “the sexual counter-revolution”.

In it John O’Sullivan discusses Harvey Weinstein and all the other cases of sexual abuse, harassment and rape that are now coming out. His focus may be too narrow for my purposes, but I still like the idea of a sexual counter-revolution. But we need much more – we need a counter counterculture revolution.

How that might look and how it might be achieved will have to be the stuff of another article or two. But my point here is this: many of us celebrated the counterculture and sexual revolution of the 60s. Now some of us have realised what a terrible mistake it all was.

Weinstein is just the tip of the iceberg of what was unleashed 50 years ago. That revolution promised so much but delivered so little – at least of lasting benefit and value. It did unleash a tidal wave of social, cultural and moral upheaval which we are all still suffering from today.

It is clearly time for a counter counter-revolution.

7 Replies to “A Half Century of the Counterculture”