Throughout much of the West major cities have large concrete blocks placed around high-traffic pedestrian areas. So what is that all about? Works of modern art? Not quite – they are security bollards. Security from what? Well, sadly, from basically one thing: jihadists who wish to mow down innocents in the name of their political ideology.

So the West is responding to this crisis – not by dealing with the root causes – but by running with band aid solutions. Instead of acknowledging that we have an Islam problem, as Tony Abbott recently pointed out, and taking appropriate steps to deal with this, we try rather useless harm minimisation approaches. 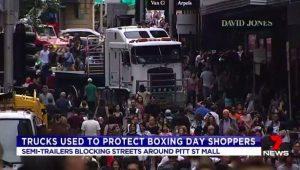 And as some of you may have noticed, it just got even worse in Sydney, with large trucks brought in to busy shopping areas. You can see the accompanying pic for yourself. One news item put it this way:

Sydney’s most popular shopping destination featured some conspicuous new additions on Tuesday morning, as crowds queueing for a Boxing Day bargain took note of a number of large semi-trailers parked around Pitt Street Mall and the Queen Victoria Building.
Security upgrades were obvious in the city, with bollards and semi-trailer trucks used as temporary barricades. The semi-trailers were particularly jarring in Sydney’s prime shopping district, parked at odd angles to stop traffic from getting through.

All this is one way to deal with the rise of terrorism: simply turn your cities into fortresses. I guess it is easier than dealing with the core problems here, which happens to be a religion which for 1400 years has used terror and bloodshed to spread its tentacles over the globe.

Instead of taking much greater care in who we let in to our countries, and being honest and up front about genuine security risks, we prefer to be PC, as we take more and more freedoms away from the general populace. An eventual police state may make us somewhat “safer,” but at what price?

Things are certainly just as bad in Europe, if not worse. One recent piece speaks about “Europe: The Islamization of Christmas”. It offers a long list of changes taking place there because of the Islamic threat. For example:

This year’s Christmas season has been marked by Islam-related controversies in nearly every European country. Most of the conflicts have been generated by Europe’s multicultural political and religious elites, who are bending over backwards to secularize Christmas, ostensibly to ensure that Muslims will not be offended by the Christian festival.
Many traditional Christmas markets have been renamed — Amsterdam Winter Parade, Brussels Winter Pleasures, Kreuzberger Wintermarkt, London Winterville, Munich Winter Festival — to project a multicultural veneer of secular tolerance.

Christmas is basically disappearing all over Europe. Let me highlight some of the more shocking developments that this article documents:

-In Denmark, a primary school in Graested cancelled a traditional church service marking the beginning of Christmas in order not to offend Muslim pupils.
-In France, the annual Christmas market in the Croix-Rousse district of Lyon was cancelled because of exorbitant security costs associated with protecting the event from Islamic terror.
-In neighboring Belgium, the head of the Red Cross in Liège, André Rouffart, ordered all 28 offices in the city to remove crucifixes to affirm the organization’s secular identity.
-In Germany, a school in Lüneburg postponed a Christmas party after a Muslim student complained that the singing of Christmas carols during school was incompatible with Islam.
-In Italy, a school in Milan removed references to Christmas at a party and renamed the holiday as “The Great Festival of Happy Holidays.”
-In Norway, a primary school in Skien announced that its Christmas festivities this year would include not only the usual reading by pupils of verses from the Bible but also two verses from the Koran which refer to Jesus.
-In Spain, the Madrid City Council replaced Christmas festivities in the capital with a neo-Pagan “International Fair of the Cultures.”

As I say, this is one way to deal with the jihadists. Thankfully not everyone in the West is going down this path however. A terrific case in point is Prime Minister Viktor Orban of Hungary. He delivered a Christmas message which is the very opposite to what we find in far too many places elsewhere.

If you happen to be fluent in Hungarian, I provide the link below. I am not however, so I rely here on others who have at least offered portions of his remarkable speech:

Our culture is the culture of life. Our starting point, the alpha and omega of our philosophy is the value of life, the dignity every person received from God – without this, we couldn’t value “human rights” and other modern phenomena either. And this is why is questionable for us, whether these can be imported into civilisations built on different pillars.
The fundamentals of European life are under attack. We don’t want our Christmas markets to be renamed, and we definitely don’t want to retreat behind concrete blocks… We don’t want our Christmas masses to be surrounded by fear and distress. We don’t want our women, our daughters to be harassed in the New Year’s Eve crowd.
We Europeans are Christians. This is ours, this is how we live.
Europe’s immune system is being deliberately weakened. They want us to stop being who we are. They want us to become those who we don’t want to be. They want us to mix with people from another world and to change in order to make it trouble-free. In the light of Christmas candles, we can clearly see the attacks against Christian culture, the attempts to dissolve Europe. They want to take away our own life and change it to something which is not our life.
The year 2017 confronted European countries with a historic task. The national governments, elected by European free nations, free citizens, must protect the Christian culture. Not against others, but for ourselves, for the protection of our families, nations, countries, Europe.

Wow, what a message. What an affirmation of what really matters. And what a repudiation of those who would seek to undermine and destroy 2000 years of our Christian heritage. We need more strong and fearless leaders like Orban. And in the US, President Trump did something Obama never liked to do: he actually spoke about Christmas and its biblical background:

For Christians, we remember the story of Jesus, Mary, and Joseph that began more than 2000 years ago. As the book of Isaiah tells us, for to us a child is born, to us a son is given and the government will be on His shoulders and He will be called Wonderful Counselor, Mighty God, Everlasting Father, Prince of Peace. This good news is the greatest Christmas gift of all, the reason for our joy and the true source of our hope.

Of interest, we have gotten so dumbed down in the West regarding our own heritage that Newsweek magazine actually had to print an entire article to inform all the biblical illiterates out there just what Trump was talking about! I kid you not.

Our mainstream media is so awash in secular leftism, that most folks working in it would not have the slightest clue as to what Trump was referring to. And they assumed we are all equally as dumb and under-educated. So they had to get some experts to help explain what was being said, including a reference to the book of Isaiah! But I digress.

It is encouraging to see at least some world leaders stand up for Christmas, and stand up for Christianity. They offer a marked contrast to so many other spineless wonders in the West who grovel before our enemies and denounce their own past.

So we have two major ways of responding to the Islamic tidal wave sweeping the West: we can surrender, give up, cave in, and become dhimmis as we deny our Judeo-Christian heritage, or we can take a stand, refuse to buckle, and reaffirm those values and beliefs that really matter.

I know which one I prefer.

16 Replies to “Responding to the Islamisation of the West”