It has become routine at this time of the year for activists, social justice warriors, religious leftists and others to seek to politicise the Christmas story. Instead of simply rejoicing in the Incarnation and the arrival of the Messiah, many want to tie this in to current political agendas.

And one key way to do this is to make the claim that Jesus was a refugee seeking asylum in another country. For example, Pope Francis has been making this claim for years now, and he just reiterated this spin on things in his Christmas Eve Mass.

As one news report states: “Recalling that Mary gave birth to Jesus in a manger because ‘there was no place for them in the inn,’ Francis highlighted the biblical story in a present day in which the White House has restricted travel for people from predominantly Muslim countries…” 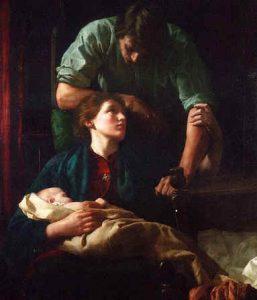 There are a number of problems with these sorts of claims. Let’s begin with his take on there being ‘no room in the inn’. Not only does this have nothing to do with refugees, it is based on a poor translation of the relevant text. And context is everything. Simply read the first seven verses of Luke 2:

In those days Caesar Augustus issued a decree that a census should be taken of the entire Roman world. (This was the first census that took place while Quirinius was governor of Syria.) And everyone went to their own town to register. So Joseph also went up from the town of Nazareth in Galilee to Judea, to Bethlehem the town of David, because he belonged to the house and line of David. He went there to register with Mary, who was pledged to be married to him and was expecting a child. While they were there, the time came for the baby to be born, and she gave birth to her firstborn, a son. She wrapped him in cloths and placed him in a manger, because there was no guest room available for them.

Note that Mary and Joseph were already in Bethlehem for a while. And newer translations (in this case, the NIV) translate the Greek term in question more accurately as “guest room”. The same word, kataluma, is used in Luke 22:11: “Where is the guest room where I may eat the Passover with My disciples?”

So, appealing to where Jesus was born has nothing to do with the modern refugee and immigration debates. If you do need a passage, then Matthew 2:13-16 is what you might use. This tells us about how Jesus’ family fled to Egypt to avoid the killing of infants by Herod the Great.

It is clear that they did not seek asylum in another country (and the place he came from and the place he went to were both part of the same Roman Empire), and this was just a temporary situation until the crisis was averted. We must also bear in mind just what the actual definition of a refugee is.

Consider the 1951 UN Refugee Convention. There it says the term “refugee” applies to any person who

A major part of this definition is the idea that the refugee is “unable” or “unwilling” to return to the country of origin. One simply has to read the rest of Matthew 2 to see that Jesus did not qualify as a refugee since he voluntarily returned to Nazareth: As it says in Matt 2:19-23:

After Herod died, an angel of the Lord appeared in a dream to Joseph in Egypt and said, “Get up, take the child and his mother and go to the land of Israel, for those who were trying to take the child’s life are dead.” So he got up, took the child and his mother and went to the land of Israel. But when he heard that Archelaus was reigning in Judea in place of his father Herod, he was afraid to go there. Having been warned in a dream, he withdrew to the district of Galilee, and he went and lived in a town called Nazareth. So was fulfilled what was said through the prophets, that he would be called a Nazarene.

So this text also does not make Jesus a refugee, seeking asylum. And he and his family certainly were not illegal immigrants. But modern debates about such matters are just that: modern debates, and we are unwise and unbiblical to seek to drag the birth and infancy narratives of Jesus into this contemporary debate.

Yes, the Bible does speak to the issue of how we treat strangers and aliens and the like. But what it says is a far cry from what most political leftists are now demanding, including open borders, mass amnesty, and so on. That debate cannot here be entered into, but I have written often on this in the past. See especially these two pieces for more on this:

And we don’t just have the biblical data to carefully consider, but millennia of theological reflection on such matters. Let me look at just one such bit of discussion on this, from Thomas Aquinas. A few years back John Horvat II looked at his thoughts on immigration and related issues. Part of that is worth quoting here:

Saint Thomas: “Man’s relations with foreigners are twofold: peaceful, and hostile: and in directing both kinds of relation the Law contained suitable precepts.”
Commentary: In making this affirmation, Saint Thomas affirms that not all immigrants are equal. Every nation has the right to decide which immigrants are beneficial, that is, “peaceful,” to the common good. As a matter of self-defense, the State can reject those criminal elements, traitors, enemies and others who it deems harmful or “hostile” to its citizens.
The second thing he affirms is that the manner of dealing with immigration is determined by law in the cases of both beneficial and “hostile” immigration. The State has the right and duty to apply its law.

Saint Thomas: “For the Jews were offered three opportunities of peaceful relations with foreigners. First, when foreigners passed through their land as travelers. Secondly, when they came to dwell in their land as newcomers. And in both these respects the Law made kind provision in its precepts: for it is written (Exodus 22:21): ’Thou shalt not molest a stranger [advenam]’; and again (Exodus 22:9): ’Thou shalt not molest a stranger [peregrino].’”
Commentary: Here Saint Thomas acknowledges the fact that others will want to come to visit or even stay in the land for some time. Such foreigners deserved to be treated with charity, respect and courtesy, which is due to any human of good will. In these cases, the law can and should protect foreigners from being badly treated or molested.

Saint Thomas: “Thirdly, when any foreigners wished to be admitted entirely to their fellowship and mode of worship. With regard to these a certain order was observed. For they were not at once admitted to citizenship: just as it was law with some nations that no one was deemed a citizen except after two or three generations, as the Philosopher says (Polit. iii, 1).”
Commentary: Saint Thomas recognizes that there will be those who will want to stay and become citizens of the lands they visit. However, he sets as the first condition for acceptance a desire to integrate fully into what would today be considered the culture and life of the nation.
A second condition is that the granting of citizenship would not be immediate. The integration process takes time. People need to adapt themselves to the nation. He quotes the philosopher Aristotle as saying this process was once deemed to take two or three generations. Saint Thomas himself does not give a time frame for this integration, but he does admit that it can take a long time.

Yes Christians should show hospitality to strangers, and yes we should look to help those who are being persecuted around the globe. But God has also set up the state to regulate such matters, and that includes protecting borders and being wise and cautious as to who is admitted into a country.

Both biblical aspects must be affirmed: individual and ecclesiastical Christian compassion, and governmental prudence in matters of national security.

19 Replies to “Jesus Was Not a Refugee”