Great books and great films usually deal with a very dark period of crisis and conflict in which all hope seems to be gone, but then a hero or group of heroes come along to save the day. When all seems lost, some brave souls are there at the hour of need, and thwart the forces of darkness and bring about justice, goodness and restoration.

I just saw the new Star Wars film and we of course had more of this being played out big time. In fact it is the same old story as the other films in the series: evil raises its ugly head, many suffer and die, darkness overwhelmingly descends, but some heroes come along and defeat the forces of evil and set the captives free. 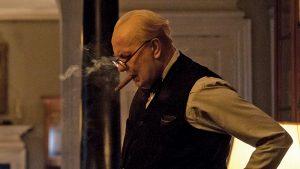 Real life is of course like this, and times of war are good examples of this. And World War II was a classic case in point. Here we had real evil raising its ugly head, causing untold damage and bloodshed, and when it seemed like all was lost, some heroic figures come on the scene and turn things around.

Hollywood and history often come together here. As a recent example of this, consider the recent movie Dunkirk. I describe the heroism found in both the reality and the film version in this piece: billmuehlenberg.com/2017/08/03/dunkirk/

While that film shows us the military might and heroic action of so many, specifically found near the beginning of the war, there is also the need of diplomatic and political leadership and heroism. Another film describing such heroism during the same period has recently appeared. I refer to Darkest Hour.

It tells the story of England’s new Prime Minister Winston Churchill, and how he responded to the crisis in Europe. With more and more European territory being gobbled up by Hitler, this is a dark hour indeed, and it seems that Churchill was providentially raised up to deal with the Nazi threat and save Europe.

Now, because the film does not open in Australia until January 11, I of course have not yet seen it. But it looks quite good indeed, and I do plan to see it when it arrives in our cinemas. I do know a bit about Churchill, and it is worth giving a quick timeline here, and then look at one article on the film.

A number of articles about the new film have already appeared, but let me draw your attention to one excellent piece. A few days ago Victor Davis Hanson’s article “Civilization’s ‘Darkest Hour’” appeared. It is well worth quoting from:

Churchill’s greatest problem was not just saving the British army [at Dunkirk], but confronting the reality that with the German conquest of Europe, the British Empire now had no allies. The Soviet Union had all but joined Hitler’s Germany under their infamous non-aggression pact of August 1939.
The United States was determined at all costs to remain neutral. Just how neutral is emphasized in “Darkest Hour” by Churchill’s sad phone call with U.S. President Franklin D. Roosevelt. FDR cleverly assures Churchill that in theory he wants to help while in fact he can do nothing. Within days of Churchill taking office, all of what is now the European Union either would be in Hitler’s hands or could be considered pro-Nazi “neutral.”
“Darkest Hour” gets its title from the understandable depression that had spread throughout the British government. Members of Churchill’s new War Cabinet wanted to sue for peace. Chamberlain and senior conservative politician Edward Wood both considered Churchill unhinged for believing Britain could survive.
Both appeasers dreamed that thuggish Italian dictator Benito Mussolini might be persuaded to beg Hitler to call off his planned invasion of Great Britain. They dreamed Mussolini could save a shred of English dignity through an arranged British surrender. Not Churchill.

He concludes his piece this way:

“Darkest Hour” takes place almost exclusively indoors during Parliament sessions, private meetings and scenes between Churchill and his equally brilliant wife, Clementine. But the dialogue is riveting, the acting superb. Actor Gary Oldman’s masterful Churchill should be a sure Academy Award-winning performance. Oldman reminds a generation of amnesiac global youth that nearly 80 years ago, the dogged defiance of a 66-year-old Victorian Englishman – portly and not much over 5-foot-6 – saved Western civilization from Nazi barbarism.
Americans should watch “Darkest Hour” for reasons beside its engaging acting and plot. We rightly believe that American industry and Soviet manpower won World War II. Yet too often, Americans forget the critical third allied ingredient: British leadership, courage and military professionalism.
Churchill led the only major nation to have fought Hitler alone. Only Britain fought from the first day to the last of World War II. It alone entered the war without attacking a country or being attacked, but simply on the principle of helping an independent Poland. The world as we know it today owes its second chance to Winston Churchill and the United Kingdom. Without them, civilization would have been lost in the darkest hours of May 1940.

The study of history is essential if we want to make sense of our times and learn how to navigate the challenges the future will bring to us. Learning about the past provides us with not just important lessons, but we get to learn of great individuals who made a massive difference.

There are of course spiritual lessons to be mentioned here as well. The greatest hero appeared on planet earth 2000 years ago when things appeared the darkest. Mankind in rebellion against God was without hope and heading for temporal and eternal destruction.

Jesus Christ came, and against all the odds – humanly speaking – turned things around and provided a way out for those who would come to him in faith and repentance. And his life, death and resurrection has inspired countless men and women to be heroes ever since, living lives of courage, self-sacrifice and endurance in dark times.

I for one am very grateful for larger than life figures such as Churchill who helped to turn the course of history. England is certainly lacking this sort of leadership today, as is most of the West. The Churchills – and the Thatchers and the Reagans – do not come around very often.

And when they do, they are often not looked upon very kindly by their contemporaries. But history, objectively assessed, will see them in a better light. For all his faults, Churchill is one such hero that needs to be made known to a new generation.

I look forward to seeing the film.

For further reading on Churchill:

Two rather recent shorter biographies of Churchill which are worth getting are:

For those wanting much more lengthy and detailed accounts, some of the classic works include:

Since those two books are each 1000 pages in length, some might prefer a mid-length treatment. For a 400-page volume see this:

Finally, see this volume for a look at the spiritual dimension to Churchill’s life:

14 Replies to “Our Darkest Hour”